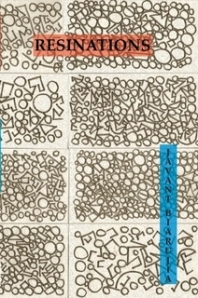 Let me begin with a provocation (Javant will appreciate this): Javant Biarujia and I are twins, Doppelgänger. Back in the 1980s, when I was still writing under my Lithuanian name, Jurate, a collection of my prose poems came out with Javant’s small press, Nosukumo. Some people thought I was another Javant Biarujia invention; his pseudonym. Perhaps I am a fiction and this review a shameless piece of self-promotion. How much more interesting to live the life of a figment.

Javant is the inventor of a private language, Taneraic; he is his own invention, self-named from the Taneraic language; a re-invention of the lad from Koo Wee Rup. The town is real, but I might be inventing Javant’s antecedents. Some one out there must know the truth. Javant Biarujia’s original name is one of the best kept secrets of Australian letters, even though Javant himself delights in gossip and anecdote. He is a terrific raconteur, but an inventor above all else.

John Jenkins launched Resinations in May this year at Collected Works Bookshop (see: http://www.johnjenkins.com.au/essays-a-articles/poetry-a-writing/134-launch-speech-for-javant-biarujias-resinations-may-2012.html). I won’t repeat his cogent words. Suffice to say that all the poems in Resinations are named after resinous gums of some kind, or refer to the production of resinous gums, or to the sources of resinous gums. All the poems are variations on the pantoum, a form with repeating lines derived from the pantun of Malay verse; a sign of Javant’s abiding connection with South-East Asia and Indonesia.

John gave an inspired introduction and a brilliant/crazy close reading of the first poem in the collection, ‘Animé’. He delved into each word and line, extrapolated and swam a perfect freestyle, careful and exact. I don’t want to do that. I take John’s final exhortation to heart – go, read, ‘make of it what you will’ – and waft in Javant’s wide sea, waiting to see which way the tide flows, waiting to see how his words connect with me. I become the inventor and make Resinations over in my own image.

Resinations: easy to see resin and nations here, but I also find sin and a wicked sense of humour; I hear resignations and read signs, redesign, resign. I find fragments of myself: shards of amber dreams; a fly caught in a millennial web; a fly caught in the ever multiplying and abundant possibilities conjured by Javant’s dense and sticky text. I think he must have written ‘Amber’ for me.

that two bit b-grade blackballing el Presidente
says who Gorby: tyro thru the pyrrhics with me!
nuntius fulminans: PUPPET OR PEOPLES MAN?
no early bedtime for Bonzo it s the holidays!

I find Jūratė, who was the goddess of the sea in Lithuanian mythology; whose amber palace accounts for the shards of amber washed up on Baltic shores. I find my misspent youth: too many hours in front of the telly; too many movies hosted by Bill Collins. I know ‘Bonzo’ refers to Ronald Reagan’s film Bedtime for Bonzo. I know ‘Nancy-boy’ refers to both Nancy Reagan and homosexuals (it’s always about sex, really). I can hear Tiny Tim’s ‘tiptoe through the tulips with me.’ I don’t have to know Latin to get the drift of ‘syndrome comparati defectus immunitatis’: a reference to AIDS. The odd thing was that when I googled the phrase, the Latin-Navajo Dictionary came up top of the list! But of course! Thus ‘death valley’ and, I suspect, a mutual love of the Serge Leoni western. Am I reading too much connection?

Javant’s poetic experiments can be traced back to the Modernists, Dada, Oulipo, the L=A=N=G=U=A=G=E School, the secret language of Polari, even Wittgenstein’s private language arguments. But I am reminded of the Denkbilder (thought-images) of the Frankfurt School, especially Walter Benjamin’s One-way Street. His snapshots-in-prose do not attempt to clarify a single thought, but are intended to open thoughts to the hidden meanings fabricated by the mind. The poems in Resinations work the same way.

Q: What is the difference between and dratchell and a drazel?
there were these three travellers yeah – a magician
a pearly king and a wiseguy see?
Larry Curley and Moe

the mouse ran up the clock – three blind mice
three blind mice an baby jesus in the cradle
the shmok s the one wiped his dick on her Dralon drapes
A: The same as between a shlemiel and a shlemazel!

‘Frankincense’ asks, what’s the difference between a slattern and a slut? Answer: nothing! A Moe is a shmo is a shlemiel is a shlemazel is a jerk is a fumbler (my nod to Gertrude Stein, Javant’s ‘Gert by Stone’). The three wise kings are blind, as is organized religion, Javant seems to say. Beneath the hokey humour and infinite elaborations, there is serious intent: a commentary on the precarious state of world affairs. Jerusalem, ‘I-rack’, the ‘rataplan’ sound of machine-gun fire, the corpse of Yasser Arafat, and our credulity and stupidity appear in various guises.

Javant is nothing if not eclectic. High culture and popular culture sit happily side by side: Dorothy Lamour and Donizetti’s opera, Lucia di Lammermoor, together in ‘Guaiac’; ‘Lana [Turner] turns a tonal trick’ here too. Film, I’ve already mentioned, but in ‘Mastich’ we find ‘The Servant, Le Chien Andalou,/ Blow-Up . . .’ Think about it. The mind boggles! References to art, literature and music abound. In ‘Benjamin’ (not Walter, I imagine, but the ‘righteous child’ of The Old Testament, and a resin, of course) we find Salinger, Freud, Dickens, Proust, Moravia, Byron, El Greco, Zurbarán and Banksy! Even if you don’t know the work of all or each intimately, you get the picture; the names resonate. We hear from everyone; from Reg Varney (‘Butea Gum’) to the New York Dolls (‘Gum Arabic’). I could go on! I can’t go on.

My advice for reading Resinations is to try it aloud. Even if your pronunciation is wrong or off, it matters not, Javant Biarujia’s words will pounce on you, wreak havoc and make you laugh out loud. As he says in ‘Dhak’, ‘“Sod em today Gomorrah tomorrah!”’

PS My only question is, is ‘Euprorbium’ meant to ‘Euphorbium’?

FRANCESCA SASNAITIS is a Melbourne-born writer and artist. She spent much of 2012 in Sydney completing an MA in Culture and Creative Practice at the University of Western Sydney. Her poetry most recently appeared in extempore and Visible Ink and can be read online at gravellyviews.wordpress.com.