On the Circumvesuviana by Lucy Dougan, Picaro Press, 2012 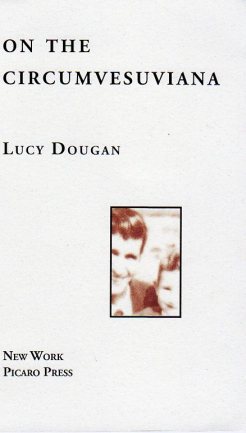 Lucy Dougan’s collection On the Circumvesuviana is very much a journey.
Although not quite narrative poetry due to the disjointed fragments of story between poems, Dougan creates an intelligent blend of confessional and indirect verse to tell her story from her perspective as a “love child” tracing her origins back to her homeland of Naples.

Many of the poems are narrated from a Neapolitan perspective as the poet recounts her native history, but still uphold a contemporary Australian viewpoint, creating an eclectic, fresh and distinctive voice. This presents a strikingly original standpoint to the reader, in which Dougan is both personally involved in the pieces while still remaining consistent in her introverted observations as a bystander. An example of this is an early poem in the collection “Beneath Us”:

The Lost ones
in deep watery chambers
tread a wheel
of encrusted walls
holding signs
like those left
waiting at airports.

The more direct focus on family and placement makes for some of the strongest poems in the collection, such as “I Went…(That Words Can’t), in which Dougan confronts and interrogates various members of her family in an attempt to put the pieces of her story into a cohesive sequence:

I went to my mother at the Trade Winds Cafe
and she said this is my story, not yours.
There and then the winds turned South.

Her mother’s statement perfectly highlights the place of the individual within both a family and a personal history, the piece becoming darker and more confronting as it progresses:

I went to the ashes of my
father that I call father
and my mother’s lover
and asked them if they thought
we could all rub along together.

The poem then draws to an unexpected and extremely evocative conclusion, a fine example of Dougan’s skill at poetic narration:

Finally, nobody said anything
and I was happy with that.

Dougan’s willingness to openly confront her position in her family as an illegitimate child is constantly combated by an introverted voice, leaving the reader to decide which parts of the story fit where, creating somewhat of an interpretive, non-linear verse novel.
She refers to both her biological father and mother’s husband as “my father that I call my father”, the latter stating ‘‘don’t make me get that DNA test” as a result of their meeting, the poet’s suffering evident as the journey progresses.

These interactions are just a select example of the many Dougan describes throughout the collection in her search for answers, another being with her ”uncle in the Mountains” who reaffirms her status as a “lovechild”, referring to her coming to be as:

a fairytale,
a chance meeting on a bus without suspension,
a cabin full of roses.

In comparison to this, Dougan is accepted and adored by her ”sisters and brother in San Giorgio” who say:

we have no word for half,
your face belongs here.

Dougan also explores this relationship with her half-siblings in Naples in other poems like the excellent “Thickly Then”, but often simultaneously alludes to an isolated childhood coupled with an internalized segregation from those around her:

I learned to love loneliness
and hugged my singularity close,
the last child – big gaps.

Although this initially reads as an exploration of sorrow, Dougan shows a subtle resistance against the forces of her anguish and an admirable willingness to confront both her personal past and that of her family in order to lay it to rest and move on. Her resilience is demonstrated in the poem “Wayside”:

My body wants
the dark of a city
when paths were lit
by shrines, by love,
their frail flames
petals no-one owns.

The overall standout component of this book is the unflinching honestly and intelligence Dougan upholds when recounting distressing elements of her life and journey, a factor that makes for some truly powerful poetry.

The final stanza of the title poem that concludes the book brings her search for answers in recounting her past in Naples to an end, while also acknowledging her inability to control where she comes from and the need to appreciate both the good and bad aspects of her heritage:

this damned theatricality
of selves- this constant circus
of being wedded
to a place, a story
as worn out and
full of grace as this.

This poem and the collection as a whole will leave few readers unmoved.
Despite being only a slim volume, On the Circumvesuviana is a compelling and unrushed book of poems that effectively explores the confusing and inevitable rift between the eyes of the past and the present within both families and cultures.

Robbie Coburn is a poet and writer from country Victoria.
His first chapbook of poems Human Batteries was published by Picaro Press in 2012.
His website can be found at: http://www.robbiecoburn.com/

On the Circumvesuviana is available from http://www.picaropress.com/page1/page1.html