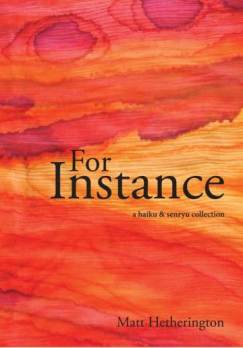 For Instance, a haiku & senryu collection by Matt Hetherington traverses “three journeys”. Spanning 2004 to 2011, it is an account of observations through India, a significant relationship and Morocco. The 60 pages are broken into 3 sections; “sweeping the dust”, “puddles” and “the horizon”.

Initially, I wanted the haiku to maintain the short, long, short line length structure of classical haiku. The author addresses this in his introduction. He states “these are not traditional haiku or senryu but are, essentially, English-language versions inspired by what I understand as the spirit of these two classical Japanese forms”

The result is a series of “snapshots” recorded in the English language style of modern haiku.

They are not “desk haiku”.  Written from direct experience, the collection is the essence of a journal, distilled into three lines of ink. It is simple and honest. When I asked to comment on his style/process Matt Hetherington wrote “it’s my (limited) understanding that haiku comes from one’s senses, not one’s imagination”

Rose Van Son in her book Three Owls and a Crescent Moon 2014 states, “The key is to simply write and to write simply” and this is what Hetherington does. Bravely, he opens his heart and invites us to share his journeys, both literal and metaphorical.

my marriage over –
separating artichoke leaves

In her “3CR Spoken Word” interview with Haiku Poet, Myron Lysenko 24th May 2015, Ela Fornalska recalls Matt Hetherington saying on a Ginko (paraphrased) If it’s not written from experience then it’s not haiku, it’s just a short poem.

the child’s wide eyes –
a puddle

The font is easy to read. The layout is spacious; three haiku per page allows room for the reader to ponder the layers of meaning they provide.

Whilst the structure and shape differ from the traditional masters of classic Japanese Haiku 17th – 19th centuries, the process of the pilgrim poet is the same. The collection includes classical elements of “sabi” beauty in loneliness and “wabi” beauty from living simply.

mountain river –
the patience
of stones

For me, For Instance contains a lesson on how to write interesting, unique haiku. This is Matt’s authentic, intimate account of three journeys. It’s not Eat, Pray, Love and that, is refreshing.

With haiku, the whole is greater than the sum of its parts. The same is true with For Instance. Lines of observation provide the weave and the layout, the weft for an honest piece of material.

Footnote: http://spokenword3cr.podbean.com/e/myron-lysenko-and-haikus/#  from conversation at 5.30mins “…and I remember Matt Hetherington saying No no no if it’s not true, it’s not a haiku, it’s just a short poem.”

Tash Adams has a scientist’s eye for discovery; she hopes to name a new species. Tash can be seen investigating nature with her children or counting syllables on her fingers (Walking whilst doing so may result in injury). She blogs infrequently at tashadams.com

For Instance is available from  http://www.mullamullapress.com/for-instance-by-matt-hetherington-mulla-mulla-press