Dodo was a small litereary magazine that was published out of Sydney from 1976 to 1979. Michael Witts, who was one of the editors, looks back at the history of the journal.

Dodo began life on a kitchen table. Keith Shadwick and Tom Thompson had selected the first issue and included one of my poems. The magazine content had been typed up on an IBM electric typewriter and the pieces were in laid out on the kitchen table of Keith’s rented flat in Hunters Hill. We glued it together on pages laid out for the printer. Layout was not our strong point. The ambition was to produce a professional looking magazine at the cheapest possible price. It was to be professionally printed, stapled and trimmed on folded foolscap (later A4) paper. Today it is difficult to remember the technological constraints in the early 1970s. Most student magazines were produced using roneo or mimograph technology. This was primitive but cheap technology; forcing ink through a wax stencil on a rotating barrel. The content had to be typed without error. Mistakes were correctable but still messy. The first copy was pretty poor and became worse as each copy was made. Dodo had aspirations beyond being merely iconoclastic.

We were poor students. From the outset we sold Dodo for $1 and paid contributors $4 per poem. We paid the printer from our own pockets and hawked the magazine ourselves. Gleebooks may have taken some copies. By the end of the first year we stopped paying contributors.

The poetry scene in Australia was fragmented. There were established magazines such as Meanjin and Poetry Australia. Most younger poets clustered around the universities. Philip Roberts ran Island Press and was a Sydney University academic. Martin Duwell ran Makar Press and was a Queensland University academic. Martin now runs Australian Poetry Review online (worth a visit on the first of each month). Melbourne seemed to be the place for small magazines with π0, Kris Hemensley, Eric Beach and Philip Edmonds all active. In Sydney Martin Johnston stunned with his poems in Honi Soit. I remember paying court to him at Elgin Street Camperdown. Shambolic and Byronic. John Forbes appeared at the Forest Lodge Hotel, fuelled by cough medicine. The Forest Lodge beer garden became an off-campus crucible for writers and students. Bob Gould held forth at his bookshop in Goulburn Street Sydney. Balmain became the suburb to be if you were a writer. Nigel Roberts lived there and taught high school. The Forth and Clyde Hotel became home to the second Sydney Push. John Tranter and Lyn Tranter lived wrote and worked in the area at nearby Glebe. Robert Adamson and others hung out together and Richard Tipping passed through from Adelaide. Adamson at the time produced a handcrafted magazine called Leatherjacket. There were a lot of drugs. Adamson was soon to get a writing grant which enabled him to buy a gold BMW. He later revived New Poetry magazine. We were all in thrall of the American poets. Duncan, Olsen, O’Hara, Ashbery and Snyder. It was into this world that Dodo thrust itself. 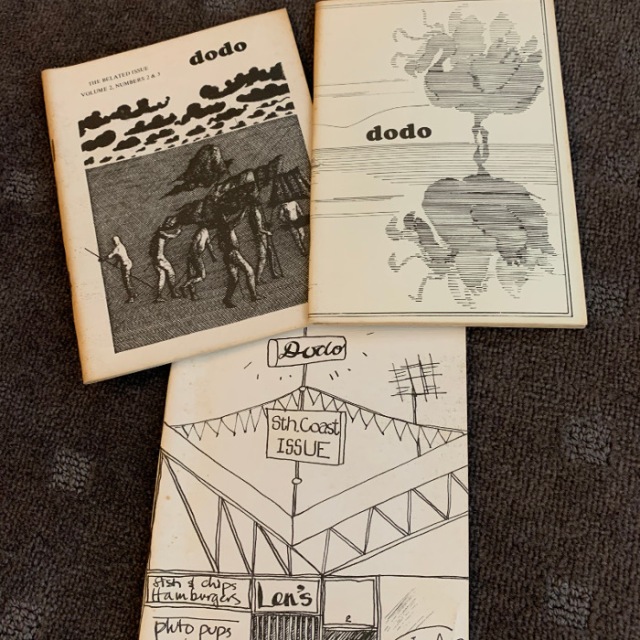 The first issue was Nude Dodo (Vol 1 # 1) October 1976. It included a lengthy prose piece from Michael Wilding, then a junior academic at Sydney Uni. This first issue was very prose focussed but also included poems by the editors, Kerry Leves and Vicki Viidikas.

Dodo Sth Coast Issue (Vol 2 # 4) edited by Michael Witts came out in October 1977. By then I had become a hippie, moved to Pericoe near Eden and lived in a tent. Quite how I managed to produce this magazine remains a mystery. Contributors included Cornelis Vleeskens, Laurie Duggan, Max Williams, Bill Beard, John Blay, Denis Gallagher, Anna Couani and Dianne Bates.

Michael Witts was born in Wales and now lives in Sydney. He has been publishing poetry since the early 1970s. He was a founding editor of DODO magazine and the Fling poetry series. His three volumes of poetry are Sirens, South and Dumb Music. His poetry can be accessed through michaelwitts.com

The Selected Your Friendly Fascist is now available as a eBook – click on the square in the bottom right hand corner to open in full screen mood.

Your Friendly Fascist was a poetry magazine so deep underground that it caused tremors among persons of a pious literary persuasion on the dread occasions of its appearance. The magazine served as an outlet for views and feelings which are not expressed in polite company. Your Friendly Fascist was not the only outrageous small literary publication of its time, but it took pleasure in divergent views. Poetry can tend to sombre pomposity, or the self –consciously polite. If there is a secret to the Fascist’s modest success, it is in the energy with which it rode on the un-ironed coattails of unruly expression.