Cloud Climbers – Declarations through Images and Words for a Just and Ecologically Sustainable Peace, edited by Dr Anne Elvey, Palaver 2021, was launched online on 28 September 2021. Angela Costi was one of the speakers at the launch.

I want to begin by acknowledging that I am meeting with you from the land of the Wurundjeri Woi Wurrung people of the Kulin Nation, and pay my respect to their Elders, past and present. Also, I pay respect to all First Nations people and their descendants who are with us today. I acknowledge my accountability and unwavering allyship for First Nations people seeking justice for all historical and systemic wrongs they have incurred since invasion.

At the outset, Cloud Climbers, the book, is an ally to First Peoples. In the earlier part of the book, we learn about Jason Kelly, a Mutti Mutti, Wamba Wamba man and his work with the First Peoples’ Assembly of Victoria. Jason explains how ‘truth-telling’ is the core towards progressing successful Treaties. Delivering the truth with its horrors, cruelties and indignities within a circle of empathy and equality is also at the core of Cloud Climbers.

This is a book with a significant vision. It brings renowned thinkers into a communal space, like a galvanising symposium or an inspiring protest. Each thinker, by activating their various practices through art, poetry, speeches and essays, moves us towards a just and ecologically sustainable, peaceful existence. This vision is steered by Anne Elvey, the editor, also an esteemed scholar and poet, who has thought deeply and carefully about each contribution. From start to finish, each piece speaks to the other exposing the causes of atrocities to our planet, finding the commonalities and igniting a collective spirit towards change. The wise discourse and reflection throughout challenges ‘the multiple violences of racism, sexism, misogyny, classism, speciesism’ by bringing to the fore responses and emotions of generosity, kindness and ‘empathetic imagination’.

William Kelly’s nine pieces of art, two of which are collaborations with Benjamin McKeown, provide the framework from which the poems and essays interact. The art aligns with the vision. It achieves a fine balance between urgency and intimacy in telling the story of the world we have inherited and created. There are striking images of interracial love and hate, nuclear inheritance, institutionalised child abuse, white hands tied by cord to herald The Arrival of servitude and slavery. And then there’s the tenderness of siblings united in sleep, a long-stemmed rose to soften a man’s steel gaze, another rose to bridge the gap between adversaries. This art, by arresting the gaze, enables the much-needed pause to view the juxtaposition of error and grace, to meditate on contrasts and comparisons before marching ahead. And so, William Kelly’s art, on its own and in collaboration, holds true to his reverberating quote: ‘Although it may be said that a painting can never stop a bullet, I know that a painting can stop a bullet from being fired.’

This art that holds the bullet to account has also birthed five poems by accomplished poets These ekphrastic poems are all masterfully written. They add valuable discoveries to enrich our gaze. Bella Li provides a timely warning with her poem 8193–II, taking us on an apocalyptic journey involving a space travel disaster in view of Earth’s collapse. Based on the evidence proffered in several essays in Cloud Climbers, including Joseph Camilleri’s essay titled Finding a Path in the Midst of Crisis, Bella’s poem is more fact than fiction.

Susan Fealy’s poem is titled, How Many Times Must I Send You Into the World? That title alone is heart-breaking as it forewarns of a four-part poem distilling images of robbed childhoods, including the tragic death of three-year-old, Syrian refugee, Aylan Kurdi.

Alex Skovron, in his poem Hands, asks the questions we must all consider to determine our complicity in the multitude of harms, historical and current, that have caused hands to be restrained. While Andy Jackson interrogates his response in a poem that doesn’t shy away from the haunting of the Hoddle Street massacre and its impact on faith. This poem, with all the other poems in Cloud Climbers, achieve what Rainer Maria Rilke declares a poem must do: it takes you to ‘the very end of an experience, to the point beyond which no human being can go. The further one dares to go, the more decent, the more personal, the more unique a life becomes.’

Each life, human and other-than-human, or can we say ‘better-than-human’, is exalted in this book. We are not overwhelmed and undermined by numbers, statistics, graphs and percentages associated with deaths from global greed and negligence. We have the stories, the people, the movements; Extinction Rebellion, School Strike 4 Climate, Journeys for Climate Justice, the JESP Project, to name a few. We have the four entities ascending and descending ladders, sitting and viewing from clouds, as witnesses, thinkers, activists, or as Anne Elvey states in her powerful poem, they are the Malachei hashalom, the angels. Rung by rung there is a way to arrive at the clouds so that we can see all pains and wounds Earth endures, and more importantly, to resolve how we can heal her.

It’s no accident that the book is coated in red, the colour of humanity’s warning. Together the Art and Poetry make compelling declarations towards a sustainable existence. In that spirit, I declare Cloud Climbers launched into a stratosphere that repels any further billionaire toxicity. 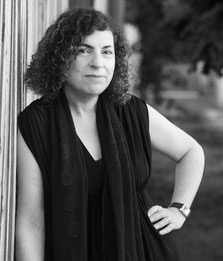 Angela Costi is the author of five poetry collections, including Honey & Salt (shortlisted for the Mary Gilmore Poetry Prize 2008), Lost in Mid-Verse (Owl Publishing, 2014) and An Embroidery of Old Maps and New (Spinifex Press, 2021). The videopoem of her award-winning poem, Shelter, was selected for the Worldwide Reading for the Dead of the Pandemic 2021 (Goethe-Institut and International Literature Festival Berlin). She received the High Commendation for Contribution to the Arts and Culture, Moreland Award 2021 for her poetry, videopoems and community-engaged practice.  https://www.facebook.com/AngelaCostiPoetics/

Cloud Climbers – Declarations through Images and Words for a Just and Ecologically Sustainable Peace is available from https://www.palaver.com/books#/cloud-climbers/ 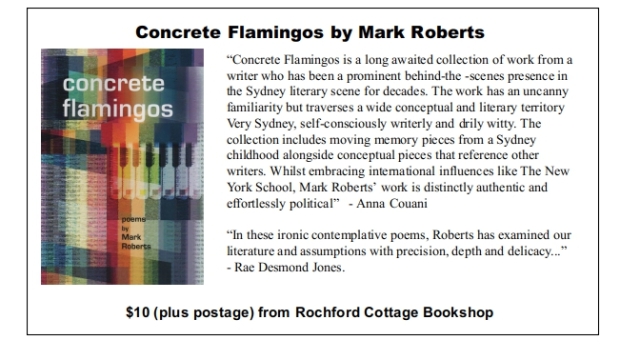