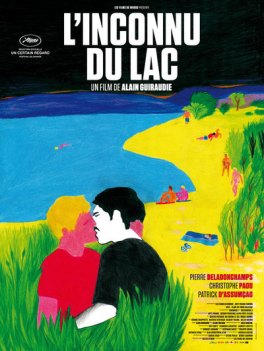 Where does Alain Guiraudie’s Stranger by the Lake take place? This may seem like a strange question at first. The answer is in the title; by the lake. But where is that lake and those surrounding woods and hills? Would someone from France recognise the place? Is it near Paris, or somewhere else in the country? No doubt the location would be in the end credits. But I choose not to look for them when I see this film, because I don’t want the question answered that way. Where, exactly, does this film take place? Something about the haze of light, the pale sky and far hills, the almost homeostastic sense of temperaturelessness conveyed by the water, the naked men, and the wind through the trees makes any geographical placement of this lake seem beside the point. My original impression is that it looks like a kind of vast reclaimed industrial estate, beautiful and barren. A landform emerging, not from the natural processes of geology, but from environmental legislation, bulldozers and civil engineers.

The lake is a beat, a site for gay men to pick up on the banks and copulate in the groves of cedar and pine. We find out nothing about what these men do in their ‘normal’ lives. We see them drive up in cars, some new and expensive, some second-hand, and infer that they have ‘normal’ jobs, but the film gives us no information beyond that. All the talk is of cocks and sex and anyone who mentions the other life is an undesirable nerd. The narration seals these men into an eternal weekend of absolute leisure. The cars, parked on the edge of the groves, are the only vessels that keep the men connected with a world outside this space of pressurised lust, and in the deepening dim of evening we see them drive off, headlights picking out the tree trunks and the black spaces where the copulating took place in the daylight hours. The cars signify the thread of continuing existence beyond, so that when one of the men goes missing, presumed drowned, but in actual fact murdered by his lover, the only sign of this absence is a car in the headlights of the man who witnessed his murder. The car is there the next morning too. Soon everyone knows someone is missing, but nothing changes, the orgy continues, except that to the young witness the murderer becomes the head chimp so to speak because the extra element of homicide adds to the thrill of having sex with him.

The denatured placelessness of the lake, its barren pleasantness gives us a clue to the meaning of this spooky little film. It is a space outside the time of jobs and family and normality, but has an internal time marked by the light of morning and noon and the slow dim of afternoon when the breeze comes, until dusk, when the time stops. It becomes a metaphysical space, a ‘no-where’ space, not unlike the bare soundstages of Lars Von Trier’s two American sermons Dogville and Manderlay. In this space we are presented with a moral demonstration of the sin of dehumanising lust being punished. The police inspector who enters the beat to question the men about the death doesn’t look like a cop at all. He is a balding, bespectacled intellectual who walks with a stoop, hands behind his back, as if bent double by the weight of thinking that has been a cross and solace in his undesirable old age. He looks like the Virgil who guides Dante through Hell, an aging gay man in his Limbo of spent lust who knows how it all ends. The young witness will become a shade, his soul abolished by his complicity, and, like the damned of Dante’s poem, he will live forever in the dim dusk of his sin; the second of terror before orgasm or murder.

You can find out more about Teasing Threads here:  https://rochfordstreetreview.com/2015/07/10/introducing-chris-palazzolos-teasing-threads-sundry-film-and-literary-criticism/