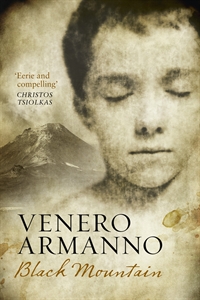 I have a pile of books on desk waiting to be reviewed or to be more correct, waiting for me to have the time to review them. Black Mountain by Venero Armanno has been waiting longer than most. Published in 2012 it was one of those books that intrigued me with its back cover blurb about a boy being sold into slavery to work in the sulphur mines of Sicily over a century ago. Finally, four years late, I finally picked it up.

Interestingly, after finally reading it I had to wait a few weeks before putting pen to paper. The novel itself was relatively easy to read once you get into it and has a strong central narrative that drives the reader forward. But it is also working on a number of different levels, and not all of them are successful.

Black Mountain opens with a man dreaming of a creature with no face. The man and the creature are in a bare room and the creature begs for the man to strangle him one senses to put him out of his misery. As he chokes the creature the blank face takes on the form of the man strangling him. The dream belongs to Mark Alter, a twenty two year old university drop out living alone outside a small coastal town in Australia. He has been having the dream about the creature for as long as he can remember. One night after watching a movie in the town cinema he decides to write a film script featuring the creature and then sends it off to a well known film producer. A few weeks later the producer contacts him and accuses him of plagiarising the creature from a novel called Black Mountain by a writer called Cesare Montenero.

Alter finds a copy of the book and finds that his creature really does feature in Montenero’s novel. He then attempts to track down the elderly and reclusive Montenero in an attempt to understand how they can share the same creatue. When he finally does tracks him down he finds that Montenero has fled and that his home, or more accurately a mansion, is empty. But he also finds a metal box with a manuscript inside and it is this manuscript which provides the bulk of Armanno’s novel . The manuscript is split up into a number of books (Black Book, Blue Book, Green Book etc) and details Montenero’s life from his days as a young slave working in the sulphur mines of Sicily to old age in Australia.

It does, however, takes 30 pages to get to the beginning of Montenero’s manuscript and I had rapidly become tired of the story of Mark Alter by that point. Alter is a very one dimensional character and his story so unlikely that it was only my interest in how we would get to the sulphur mines of Sicily that kept me going.  But the manuscript is a different matter. The character of the young Montenero is richly drawn and the dissolution and hopelessness of the sulphur mines, and the child slaves that are forced to work there, stands out. This is powerful narrative writing which continues through much of the rest of the novel as the young Montenero escapes and is rescued almost on the point of death.

As the story unfolds, however, we begin to learn more about Montenero’s background. He was not, as he thought, sold into slavery as a young boy by his family, rather he was the result of a long running experiment to ‘clone’ humans, an experiment which was shut down during WW1. As Montenero learns more about his background the narrative again starts to break down as the fantasy element of the novel, a sort of Victorian genetic enginering, begins to assert itself.

Black Mountain is for me a slightly frustrating novel and I sense that Armanno is trying to do a little too much in it. I did note that he has written a number of young adult novels (along with another 9 novels) and I did feel at times, particularly during the Prologue, that there elements of a YA novel close to the surface. Perhaps as a result I felt Black Mountain to be a uneven novel, which is ashame because when it is good, such as in the large section revolving around the young Montenero’s life in Sicily, his escape from from the sulphur mines and his rise and fall as a writer, it is very very good. There is just too much getting in the way of the core narrative. As an editor I would have perhaps suggested ditching the Mark Alter character completely and concentrating purely on the life story of Montenero. The novel may have been slightly shorter but you would be thrust into the drama of the sulphur mines almost from page one.

So in the end Black Mountain didn’t quite live up my expectations, which were perhaps a little high given how long I had waited before reading the novel. I felt a little like finally drinking a wine that had been cellared for years only to find that it had just past its peak.

Black Mountain is available from http://www.uqp.uq.edu.au/book.aspx/1205/Black%20Mountain