Goodbye, Cruel by Melinda Smith was launched by John Foulcher on 8 April at the Civic Digest Cafe, Civic Theatre as part of the 2017 Newcastle Writers Festival 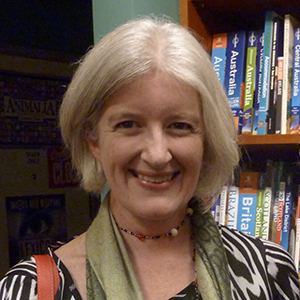 I first heard Melinda read at a Canberra venue with ‘local poets’ about ten years ago. They were all good poets but Melinda stood out – this was the real deal, here was an authentic voice who knew about craft. So I bought her slim, staple-bound volume, First . . . then and found the poems were as good on the page as they were when she read them. When she sent a manuscript to Pitt Street Poetry, John asked me if I knew her and what did I think. I think I said something like ‘read the manuscript’ but I can’t really remember. Soon after, John rang me to say that, although PSP’s year was full, he’d have to fit this one in – Melinda, he suggested, was Australia’s Wendy Cope. His faith was justified when Drag down to unlock or place an emergency call beat a host of luminaries to win the 2014 Prime Minister’s Award. And it richly deserved to do so.

Command of a wide diversity of tone and subject matter, as well as consummate control of form, marked Melinda’s first PSP book, and while those qualities can again be found here, Goodbye, Cruel is a real step forward. Someone once suggested to me that, when you’ve got an achievement under your belt, you shouldn’t try to get better, you should try to get worse – by that, he meant you shouldn’t simply repeat what you know you can do, but you should try to do some things which are new territory for you, you should risk failure. I think Melinda has tried to get worse in this book, but I have to tell you she’s failed spectacularly, for every risk she seems to have taken here has worked. This is a terrific book.

Let’s start with the title: Goodbye, Cruel . . . yes, we all know what the next word is, but it’s not there. The omission is a verbal wink – there’s the hint of a sly laugh in it. ‘There are so many clichés about suicide,’ it seems to say, ‘but can we just put them aside and start again?’ The second section of the book, from which the title is lifted, does exactly that – it stares down an act which many would see as the ultimate obscenity – returning the most essential gift we’ve been given. Why would you do it? When I was a secondary school teacher (for my sins I spent forty years in the wilderness of classrooms), we weren’t allowed talk of suicide with kids. It was always rushed over, mutely hushed, avoided for fear the very acknowledgement of the act would put its seeds in other young heads. In newspaper reports, when someone suicides it’s usually not articulated; death in such cases is ‘untimely’. The absence of stated cause becomes a whisper of shock, almost embarrassment. It’s as if the perpetrator/victim shouldn’t be further humiliated by the ownership of the act.

This isn’t the approach Melinda takes. In a blisteringly good series of poems, she enters the act, she gives the voiceless voice, granting those who cross into death by their own hands a kind of dignity. This isn’t to say that she approves or affirms their decisions; she simply makes such a response irrelevant. In trademark fashion, she does this through shifts in voice and form. She moves effortlessly from the intimate and the colloquial to the formal and the elevated, allowing people to speak for themselves through time. Take, for instance, these wonderful lines from ‘A plate of biscuits’, written from the adult point of view of a child whose mother suicided when she was young. The poem addresses her mother:

That morning
you rose
iced the special biscuits
placed them on the baby-blue plate
made porridge for us
laid out clean clothes for my brother and me
combed our hair, oiled down my forehead curl
drove us to the school
dropped him at his classroom
walked me to my kindergarten class party
chatted to the teacher as she took the plate
from your pale hand
(above my head
it seemed you were passing her
a piece of the sky)
got back in the car
drove to your friend’s empty house
taped the doors and windows shut
and gassed yourself.

From the child’s perspective, an ordinary day – the list of routines which seem completely average, harmless, capped with a horrific action as if it, also, was nothing in particular. The simplicity of the language not only mimics the child’s viewpoint but it begs the question – what prompted this? Yet, as the list of daily tasks builds to its awful climax, its pounding rhythm becomes oppressive – you can hear a rising tide of frustration in it. The child may not understand this, but we who find ourselves slave to a numbing tide of routines that imperceptibly overtake and control us – we understand. Whether we’ve peered into that dark abyss or not, we get it.

How this contrasts with ‘The Undiscovered Country’, the poem which precedes ‘A plate of biscuits’. In this poem’s spare, fluid tercets, Melinda takes the voice of one of the suicides from Dante’s Inferno, condemned to exist as a gnarled, prickle-infested tree for eternity. A hatred of the body, always inferior, always inadequate, is at the heart of the woman/tree, who mutters to us:

I never once loved my body.
At first I hardly noticed it
then later – when it bled every month

when my breasts swelled. intruded themselves,
complicated my every move – it felt more
like a punishment, a humiliating

costume into which I had been sewn.
Too big, too floppy, too pale, too slow.
Sometimes I tried to take control

to starve it, cut it, knock it out with drink.
Later I simply bore it as a burden
as one does.

I’m sure the girls I taught with who had eating disorders – too many of them – would understand this as well.

Goodbye, Cruel . . . when we get to the final poem of this sequence, ‘Contemplating the Gap’, the title and its omission take on a new significance – Melinda tells me she’s going to read this poem, so I won’t ruin for you, other than to say the sequence ends on a note of strength and hope. In the end, the poem farewells cruelty itself, celebrates life in all its frailty and imperfection.

Don’t think, though, that this sequence is the extent of the book – Melinda tilts at an enormous number of poetic windmills here, from the elegant interpretations of Persian poet, Rabi’a Balkhi in the section entitled ‘Safina’ to the crisp observations of country and our own national history in the final sections, ‘Riverine’ and ‘Endtime’. The evocation of cattle in ‘A paddockful of Black Angus’ is as good as anything by our great poetic chroniclers of rural life:

So dark
the light slides off them,
they scan as silhouettes,
cave-painting cattle
radiating peace
as old as herds.
One of them arcs tail away from rump
with the suggestion of an arabesque,
makes a soft pile

podder podder
on the silent grass.

And that razor-sharp, Cope-like wit – many poems here lull you into laughter, then turn the knife. I can’t resist this delightful fantasy on a line of graffiti:

There’s a sting in the tail there that leaves you wondering if laughter was the appropriate response to anything in the poem.

When I was at university (yes, I can just about remember it), I took a course in literary craftsmanship, conducted by a really fine poet, Professor JM Couper. Ultimately, Couper told us, a poet’s worth is measured by the way he or she handles the long poem. As I’ve grown older and done a little writing poetry myself, I’ve come to doubt that. Often, I think a poet’s real talent is exemplified by the way he or she handles the short poem, the one that demands significance from a shard (think of WC Williams’ ‘The Red Wheelbarrow’). As good as all Melinda’s more expansive poems are, you only need to read a few of her micro-poems to see how impressive her talent is. In this, the book’s final poem, ‘the bone tree’ is among Goodbye, Cruel’s finest:

Congratulations, Melinda. This book is a major achievement.

John Foulcher has written eleven books of poetry, most recently 101 Poems (PSP 2015), a selection from his previous books, and A Casual Penance (PSP 2017). His work has appeared in national magazines and anthologies for over thirty years. In 2010-11 he was the Literature Board’s resident at the Keesing Studio in Paris. He lives in Canberra.

For information on how to order Goodbye Cruel contact Pitt Street Poetry at http://pittstreetpoetry.com/