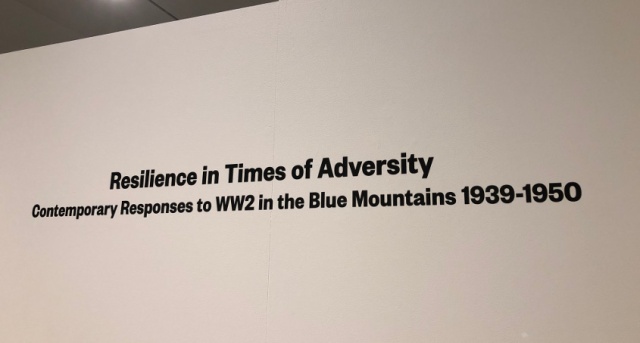 “I can’t tell you what art does and how it does it, but I know that art has often judged the judges, pleaded revenge to the innocent and shown to the future what the past has suffered, so that it has never been forgotten. I know too that the powerful fear art, whatever its form, when it does this, and that amongst the people such art sometimes runs like a rumour and a legend because it makes sense of what life’s brutalities cannot, a sense that unites us, for it is inseparable from a justice at last. Art, when it functions like this, becomes a meeting-place of the invisible, the irreducible, the enduring…” (Keeping a Rendezvous, John Berger p9)

Australia is often ironically referred to as ‘the lucky country’ and in terms of the calamitous effects of war in other places Australia has indeed been fortunate. However, the loss of young lives in both world wars and the consequent civilian trauma deeply influenced life in Australia. As it is now 80 years since the start of World War2 only the very old can remember the impact of this war and of its aftermath. John Berger has pointed out that It is timely to consider ‘what the past has suffered’ – and how art can ‘make sense of what life’s brutalities cannot’. (Keeping a Rendezvous, John Berger p9)

The 1997 exhibition Sarajevo, which I both curated and contributed to, was a response to the ethnic cleansing and cultural annihilation that was the cause of so much suffering and loss connected to this city and to its population. Curating Sarajevo provided me with a framework for the development of my ideas about the intersections between war, art and life. Joan Kerr in the Sarajevo catalogue wrote –

Art certainly seems irrelevant when there is not enough food, warmth or water for survival…art alone can capture a specific war-torn moment or place for all time…

Militarism, conflict and suffering that seem so universal allows artists to provide personal responses that mingle location, culture and values. It is through such an artist’s reaction that art can provide relevance to us in 2019.  This is implicit in this curatorial project Resilience in Times of Adversity: Contemporary Responses to WW2 in the Blue Mountains. 1939-1950.

Through my research into other aspects of Blue Mountains cultural history cumulating in the exhibitions Correspondence: The War Illustrated.  Woodford Academy, Woodford 2018; Illustrated: Women, Work and War WW2.  Explorers- Narratives of Site: Woodford Academy, Woodford 2017, I become aware of this time and the impact the war had on people living in the mountains. Consequently, the projects conceptual and curatorial framework was further developed to invite Blue Mountain artists, writers, historians and local community groups  were invited to collaborate and participate in a contemporary art exhibition that focused on the personal, historical and political landscape of the Blue Mountains during, and post, World War2.

Local artists were asked to submit proposals which shows that they had a working methodology that incorporated archival material in the production of their work and incorporated social and political issues through an understanding of contemporary research based art projects. Their proposals could document, record and/or visually interpret any aspects of the period in the Blue Mountains. The five artists featured in the exhibition work with a variety of media and have similar political and poetic intentions in stressing the lives and resilience of individuals and communities.

The selected artists, and their field of interest are –

These artists are among the relatively few contemporary Australian artists who demonstrate a deep concern for the effects of warfare in their work. This exhibition reflects the many-sided nature of the tragedy of war and the resilience of the human spirit so that the objects and visual material in this exhibition complement and resonate with each other, giving a profound and disturbing testament of the universal effects of war.