slow-dancing in the dark,
in my hand the kitchen tidy bag
ready for the red bin,

from the large sharp fast outdoors.
A stride before the bin
I sensed something

someone looking at me,
stopped and searched
for the one gazing:

its hollow-chinned mouth
pouting upwards to the stars.
It stared at me sideways.

by bird standards.
Neither metaphor nor portent
the frogmouth sat solid

centred
as curious about me, it seemed,
as I of it.

The bird turned
its near-neckless head
stared at me from its other eye.

Did I look different from the far side?
Motionless a moment later
it was invisible again, or close enough

then, with no warning, flew
disappeared
into the tree-filled night.

At my ankles the cat stood silent
sniffing at the path
beetles and slugs.

Four squawky Noisy Miners
splash in the bright birdbath
mosaiced by my sister.
A fifth sits drying on the hoist.
“Little plump is on the edge again,”
Mum says. “Funny little creature.”

My sister’s right. Our mother needs
to feel useful. I ask her to fold
the paper serviettes while I cook lunch
after my weekly yoga.

Slowly, so carefully, she tears the top one
into two neat halves. “Is that right?” she asks.
My mouth opens, closes, opens again.
“Perfect,” I say. I swallow tears.

Later, wiping up, she dries and dries
the bone-dry glass not knowing where
or how to put it down. I take it,
try to smile, put it on the bench

not the high cupboard that she can’t reach
any more. Her face crumples anyway.
“Where has the boy gone?”
“Dad’s just having a nap, remember?”

The rabbit is blue.
His long burrow
winding below the blue stream
is blue. The fish are blue.
Their pond is also blue.
The rabbit’s lamps,
hanging from the ceiling
of his blue burrow, are blue
beneath the blue grass.

My mother colours
trees birds rabbits streams
in one of the godsend books
the ACAT team advised.
Today, that page turns blue.

She smiles at the page,
selects another pencil.
Gold, this time.

Poor lost girl, displaced in time and space
without a TARDIS, sobs. At eighty-three
she yearns to return to long-dead parents
in a demolished house. “Why don’t they write?
“I have to go home to them. I have to.
Why won’t anyone take me to the station?”

Her face buried in my shoulder
as my baby one must once have burrowed
into hers. I read her Eeyore’s birthday,
happiness flowing from a licked-empty honey pot
and a burst balloon,
lead her out to revel

in her small garden of delights
new-minted every moment. “Look at those limes!
And what are the lovely flowers there?
The white ones?” The star magnolias
that she planted. Each leaf and fruit
and flower new again and again

After the hardest years
of pains and fears
at last they took her home. 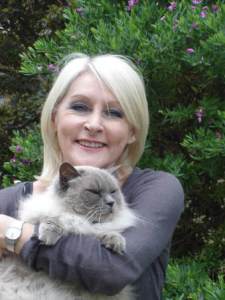 Jenny Blackford’s poems have appeared in Australian Poetry Journal, Westerly, Going Down Swinging, the US speculative fictional magazine Strange Horizons and Asimov’s, and in many other journals , magazines and anthologies. Her poetry awards include first place in the Thunderbird Prize for Crime Poetry, the Connemara Mussel Festival Poetry Prize and the Humorous Verse section of the Henry Lawson Awards, as well as numerous placings, commendations and listings. She can be found at http://www.jennyblackford.com/

The Alpaca Cantos is available from https://pittstreetpoetry.com/poet/jenny-blackford/