The driver, my friend, squints into the rain.
We took the wrong turn-off but Singapore
is so small it doesn’t matter where you go.

She doesn’t know Change Alley. The new hotel
lies over Clifford Pier. I see the ghosts of red lights
at the harbour. I hear long-dead horses stamp and pull

at their tethers as wagons are loaded with sacks
swollen with rice, sugar and spices. At Tanjong Rhu
even the water’s edge has shifted. Yet a memory

of my great-grandmother’s benevolent, sepia face
swimming out from between jars at her shop remains.
I have her jade earrings now, deep green cabochons

gripped by gold teeth, mounted on stems that pass
through my flesh and hers at once. Tomorrow,
my grandmother turns eighty. For now, I wear the ring

I chose for her: a bezel-set sapphire surrounded
by diamonds. It’s not easy to find good jade
in Australia, much less old jade. The car stops

outside the botanical gardens: a fine cloud mists
the crowns of trees. I watch the glossy streets and see
myself aged three, seven, twenty. It’s as though I can never leave.

There is nothing more difficult… than to paint a rose.
– Henri Matisse

Peony, Chinese rose, history taught me about you.
You adorned the headdresses of Manchurian princesses,
pinned above tassels that swung back and forth,
mimicking their mincing walk. An upturned bowl placed
under a platform, the sway of hands for balance. A fiction
of bound feet. Were you real, flower of fortune?

What does a peony smell like? I have nestled
my nose within their depths but breathed nothing
of their notes. Perhaps I needed to have crushed them,
smeared their juice in my hands, eaten their petals one
by one. I know that women who swallow flowers
must avoid princes, rivers and deposed emperors.

Like the rose, so many shades of blood and white.
One birthday I woke to find peonies the shade
of night’s red stabbed in a vase. Their hearts:
so closed, so full of mystery. In seven days a shake
and the flowers would fall apart. I would taste
the naked heads: nothing, not even pollen, would remain.

Under the sign of mudan, you bought me my first gift.
Celadon-green, cool against the peach skin of my cheek.
Too big: the bangle slipped on and off my wrist. When a man
gives you jade, it’s like diamonds, only truer. How was I to know
we were only mortal? I bound the cracks with gold.
I thought I was to die. Then it shattered into four.

In the darkness of the shophouse, arrayed on a stand:
bottles containing the essence of peonies. Pivoine magnifica,
the magnificent peony. Healer of the gods, I see you
tacked under the altar in a takeaway shop. On the shelf,
Guan Yu, deified, stands ready for battle. His face, painted
crimson: the shade of these peonies before rot.

We cut away the tape and unroll the carpet.
Pink and red swirls tufted in pure new wool.
Blossoms on branches form the background
to stylized cross-sections of peonies: leaves,
stems, blooms. One lady nods and smiles:
China’s national flower. Is it? Am I? I’ve forgotten.

“All the news is famine and famine”.
– A Woman Without A Country, Eavan Boland

In the waiting rooms of the mornings
the empty chairs hold air. Women come
and go. Needles line the bins. The acrid
sterilization of skin. The long, cold probe.

Outside the glass the city is laid out
like some ancient engraving enacted
from a conqueror’s vantage point.
The bridge is a miracle of engineering

spanning the headlands. Homes upon
homes, lives acting out behind walls,
under roofs, within bedrooms, inside bodies.
Where does the woman without a country

return to? For a human voice: the TV,
song, poetry. For touch: not even a cat.

Seven in the Bamboo

In the morning I wake and put on my clothes
and shoes and a cap. I walk to the water’s edge

past dogs, people, bicycles and boats.
The sun rises on the horizon and I sit and face

the water and think and watch the clouds and the trees.
I don’t read a newspaper or buy a coffee at the café.

I go home and take a hot shower and sit with my cats.
I read a book, maybe two, write some poems perhaps.

I listen to music: the radio, sometimes, or an old song
from my collection. I stretch and lie down in the grass.

I eat something: fruit, cheese, a bowl of soup. On good days
there is chocolate. There is always a cup of tea. I don’t think

about pain, or loss, or the past, although they are there.
I don’t think about refugees or dead babies or chemical

warfare or Iraq or Israel. I worry I live under a rock
even as my mind winds up the wooded paths and streams

of third-century China. I imagine I am packing a frame-
and-cloth bag full of books and two changes of clothes

for a long journey into the mountains. Seven of us meet
in a bamboo grove. Two of us make love in the moonlight

after we are all drunk from pots of rice wine. Someone watches
us, but we don’t care. We forget about society, about politics,

about government. We sow, we grow, we reap. We dream, we read,
we write, we paint. The notes of the zither shiver in the night air.

My mother lowered me into the water.
She put me on my back. Some instinct
held my neck rigid and my head up.

The photograph is lost. In the album
of my mind I see the panic in my fists.
I still feel the cold of the water around me.

He said we would play a game.
We all jumped. He held my hand, tight.

At the bottom, we counted. Bubbles
silvered to the surface. Then, I ran out

of air. I couldn’t wrench free. On his way
up, he kicked me. The water: so heavy.

In the afternoons it was my joy
to fill the small kettle and carry it
to my grandfather in the living room.

He’d put it on the hotplate, bring
the water to the boil. Tea leaves in the pot.
The scent of bamboo. The bitter brew.

To count out the numbers: we peel the yams.
Boil them, mash them, add flour and knead
into dough. The women in a line, moulding
the dimpled balls. I never understood the fuss.
Oil coats my lips, my teeth and my tongue.

I feel the loss of the bathtub most of all.
On winter mornings, I would wake and run
a hot bath. Unbearable, blistering heat.

Steam rising from water. Salt dissolving
instantly. The sublime immersion—
a return to the womb, or a coffin.

At three o’clock in the morning
my grandmother decided to scrub
the bathroom floor.

She slipped, cut her forehead open
on a pipe, then landed on her face.
Blood, and two black eyes.

This woman has fought all her life.
At night, she wrestles with her selves.
Sweat soaks her bedclothes.

I never knew I tasted sweet.
Like honey from the rock—

Dry sermons droning overhead
while I silently read the Song

of Songs, Psalms, Proverbs.
Verses like the tides. My first

poetry, the ocean of my undoing.
At the bottom: a tin compass,
its needle wild and searching.

Stone in fist. Rock in hand.
Sand a canvas, moon not yet—

circle of circles. There an angle,
here a curve—at the centre, only

your own hewn face. Spiral of nothing.
The tide comes. Takes it all—

You turn the corner into an entire room
of uteri—watercoloured wombs on wallpaper,
stitched and stuffed fabric fallopian tubes

memento mori, the jaw missing, eyeholes
dark like the void. A great big fuck-you
to fertility. Suddenly, you don’t feel so alone.

Almost transgressive to look at the woman
with her legs slightly parted. Not a woman,
but knowing a woman had to pose for it.
Every fold of skin, every minute hair, present—

A toddler covers her eyes when she sees it.
Her mother leads her around to the front
and waits for her to look again. They talk,
quietly, so I can only imagine the wise, open

conversation I never had. Pubis, vulva, labia,
clitoris. The stomach flat, the hips concave.
Pert breasts, blush of nipples. I have never
looked like this, not even in my dreams.

She has clamped a hand over her mouth.
She has two children standing next to her.
She has stopped painting figures.
Black, rust, white—concatenation
of snow and rain. To exist is to resist.

‘The Hymen Diaries’ is a response, in parts, to the following artworks: 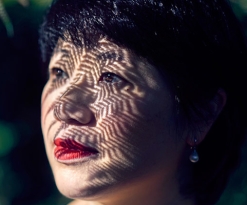 Eileen Chong is a poet based in Sydney, Australia. She was born in Singapore of Chinese descent. Her poetry collections are Burning Rice (2012), Peony (2014), Painting Red Orchids (2016), and Rainforest (2018), all from Pitt Street Poetry, Sydney. Her next collection, A Thousand Crimson Blooms, is forthcoming from the University of Queensland Press in April 2021. 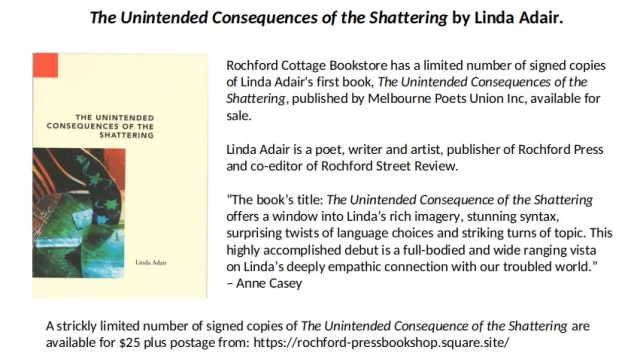