I think this is the end now,
the clearing time, the dis-engage:
disorder lay waste to my love
now love must stake her border.

My hole in bucket, hold on tight,
I — slave to salve you through the night —
your battle lines were black and white;
our family’s membranes, ruptured.

The absence in your wake
takes startling shape:

trailing shadow / cast-off shoe
nemesis / I got my due.

All afternoon the women shared their wounding.
Loosed from fathers, free of knots,
under their belts, the secret smut,
a hothouse lark, the race to wed,
time gripping tighter.

Along the line, children defined
the marked off landscape of their lives:
marriage struck then swelled then slowed
the girl displaced inside.

A blinding sense of nondescript,
bright parodies of dull success;
their aims like arrows falling

out of sight as if they’d died —
And not one flashed uniquely,
and nothing fresh survived.

I’ve been consuming
too many crime podcasts,
have started locking the door

On Twitter, a mother marks
her daughter’s inaugural public groping,
while my own child crests
the dangerous circumference of her imminent flesh —
the world preemptively turning to trawl
her for its pleasure and perversion.

It is a dark world in which we dare love.

Lured by the luminol glow of the lifeblood of

I brood deep into the murky night
over
how it’s usually men who — ?
why so many women are — ?
that our forsaken children must —?

The unconscious is a precise and even pedantic symbolist.
— D. M. Thomas

First thirst / then speech / then sight / then sense expire

What interim world are you hiding in?
In dreams / I hear you calling / with the voice of my own child

An elastic covering called skin
encases our bodies, my son reads,
but I am not looking at the inlaid page
with its transparent windows transgressively
unveiling the human form’s clandestine layers —

No, I am ardently watching him:
with his ripening cheeks and fecund brain
and glistening eyes of impermanence
that look to me — to me! — for solace

and tonight, as he reads, I am seeing inside
to the myriad processes functioning to hold us
implausibly within this quivering world —

and it makes my dark involuntary heart muscle shudder

For months you watched
perplexed, perhaps wondering
why we walked and played less —

or why I wept and drank
more. Then there were
those dark soul nights spent
baying in the back garden
at the stars;

the flawed organ in your vaulted
chest somehow pumping
powerfully enough to sustain us.

But as you ebbed, I failed
to notice your stiff gait,
your listlessness, the insidious
cough as your lungs began
to fill with a foamy tide.

And by the time I found
time to seek help,
you were too far gone:

your heart swamped
with human grief — unfathomable,
even to you.

Michele Seminara is a poet and editor from Sydney. Her writing has twice been nominated for a Pushcart Prize and has appeared in journals such as Cordite, Mascara Literary Review, Jacket2 Magazine and Australian Poetry Journal. She has published two full-length collections, Suburban Fantasy (UWA Publishing, 2021) and Engraft (Island Press, 2016), and chapbooks Scar to Scar (written with Robbie Coburn, PressPress, 2016) and HUSH (Blank Rune Press, 2017). Michele is curator of the Manly Art Gallery & Museum Poetry Alive Readings, and managing editor of online creative arts journal Verity La. Find more from Michele at her website: https://micheleseminara.net/ 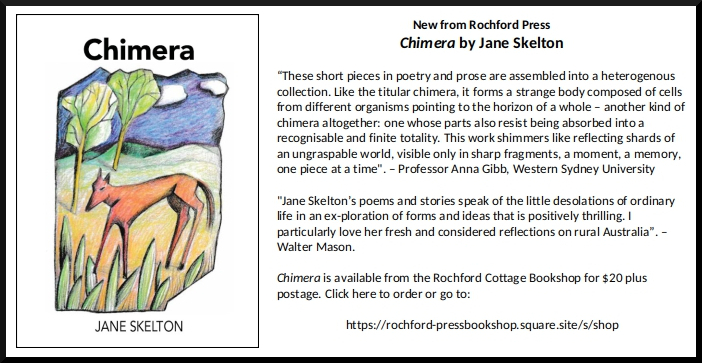