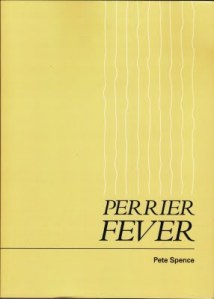 The following is a slightly edited version of Kris Hemensley’s speech to launch Pete Spence’s latest collection Perrier Fever at the “Poetry and the Contemporary Symposium”, held at the Bella Union, 54 Victoria Street, Carlton as part of the Grand Parade launch; Thursday, 7th July, 2011.

Pete Spence is an old friend & colleague; a member of our Collected Works Bookshop collective in the mid to late ’80s, (which included such luminaries as Robert Kenny, Jurate Sasnaitis, Des Cowley, Ted Hopkins, Rob Finlayson, amongst many others); a fellow little mag editor (who’ll ever forget Post Neo?), gallery buff, international traveller.

He was first mentioned to me by the late Geoff Eggleston as a poet friend he’d like me to meet –circa ’82, ’83… Ah Geoff : author of this memorable couplet, “No man is an island / and no woman is a clipper-ship” — I still dont quite know what it means! Likewise, Pete’s line always in my head : “relaxing on a Li-Lo reading Li Po” –the entire verse is, “a parenthesis ladles the tune / relaxing on a Li-Lo reading Li Po / under some amended weather / tumbling sunshine”…

James Schuyler said you’d never get New York poetry until you realized the gallons of paint flowing through it –painting & painters. Following that thought, Pete’s book abounds in names (Pam, Ken, John, Corny et al), references to painting, to poetry & to poets, & to music, composers –as though a record is always playing –a symphony, perhaps, he shares with Alan Wearne, his friend & publisher. Spence is a poet of fraternity –which includes conviviality & melancholy… No wonder his recent poem in progress is called The Kynetonbury Tales, and a delight it’s been to read via e-mail. And, therefore, what a coup that Alan Wearne has pinned this pilgrim down long enough to make a cohesive book out of a vast & errant production –this book out of many possible compilations. And Alan is to be heartily congratulated on his Grand Parade Poets publishing project, & this particular volume.

It’s such a good looker… Designed & set by Christopher Edwards, — who shares with Pete similar ‘adventures in poetry’, –the chance & play –the relishing of words as though a different species of artist –painter, sculptor, composer.

And Alan himself along this track, whose Otis Redding poem way back in Public Relations (published by Gargoyle Poets in 1973), advances his share of Pete’s kind of fun:

“Redding, Redding, remorse will smash any epilogue chance, / any sweat-liturgy you sang and I might have attempted / once I walked in the rain until one once / to shout O, ’tis (forever!) Redding” …

So, a poet of fraternity –which tag can deal with correspondence & address (the given social world a poet inhabits) and the matter of influence. And if I can use the French ‘chez’, thus “with” (which Paul Buck gave me decades ago) : “with” in preference to “after” with its misleading implication of “imitation” –, then we can say Pete Spence’s poems stay with the effects of his long lasting affections… He revisits them, he calls upon them –they are become motifs –they are his muses, they are his amusements –elegy, ode, sonnet, City, Landscape, Weather, the Sun, the Sky…

I opened his book at random the other day, on page 105, –the poem entitled Shop :

“i thought the shop / was called SLIDE / until i walked into the door!”

I’m still visualizing a kind of Jacques Tati cartoon, or Charlie Chaplin, or Rowan Atkinson. The jokeyness transmutes or elevates from ha-ha to Surrealist smile in the poem Drawing:

Perhaps this collection, Perrier Fever (and I reiterate, one possible selection of many –notwithstanding the attrition, the loss & destruction of poems along the way, allusion to which I recall from conversation 25 or 30 years ago), perhaps it is his humourous selected poems (different kinds of humour)… But even so it’s informed by the totality of his poetry. Remember, Pete is no Spring-chicken. A different personality would have seen him vying for volumes & anthologies many times over.

But who is Pete Spence?
As scholarship, let alone the insatiable curiosity of the reader like Pete himself, as it expands its purview, so outsiders are claimed for the vast continuum; so peripherals are identified, brought in from the cold, –not that the cold isn’t a legitimate or even desirable place to be.
Alan’s told us a little about Pete. Pete’s written a little about himself here in his book. I’d like to add one story to the biography.
It’s the story of a possible history, had a manuscript for an anthology around 1971, actually transpired. In 1973 I was given custody of the mss. of Dark Ages Journal. In 1984, in my H/EAR magazine, dedicated to a ’40s/’60s/’80s chronicle of the ‘New’, I described that anthology’s perspective. It was a Melbourne, Sydney, Adelaide, New Zealand compendium. Its editors had included Charles Buckmaster, probably Garrie Hutchinson & either Richard Tipping or Rob Tillett. Students of the ’68-’71 or so period will recognize many of the names –Michael Dransfield, Charles Buckmaster, Terry Gillmore, John Jenkins, Vicki Viidikas, Garrie Hutchinson, Frances Yule, Ian Robertson; New Zealanders like Alan Brunton, Murray Edmond, Gary Langford. But the unusual Melbourne names are Walter Billeter, Robert Kenny, David Miller, Robert Harris & Pete Spence.

I licked my lips relishing the different history this coincidence promoted back then. The La Mama [Poets Workshop] ’60s style become conventional even as it was being hailed in the anthology edited by Tom Shapcott, Australian Poetry Now, suddenly had the possibility of rejuvination! I like it very much that Spence is part of that potential history. As he is now in the present day.
Without further ado, in launching Perrier Fever, may I introduce to you : Pete Spence…

The original version of this speech can be found at http://collectedworks-poetryideas.blogspot.com/2011/10/merri-creek-poems-pieces-25october-2011.html