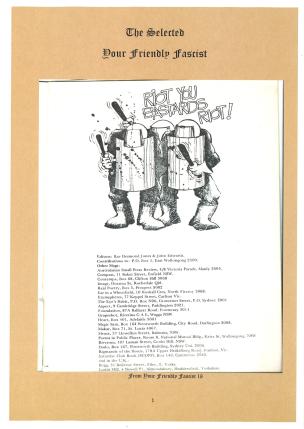 It was always,”Rae Desmond Jones and John Edwards.” Over the years, I have become used to being catalogued as the “and.”  Already in the 60s, Rae was rehearsing his role as the Mayor (Rae Desmond Jones was Mayor of Ashfield from 2004 to 2006) and I had to be content with the role of Deputy Mayor, but there are some advantages in being Deputy Sherriff, Deputy Prime Minister or Deputy “Duce.” In organising the technical production of the magazine, “Il Duce” often lived up to the name of a “friendly fascist.” However the actual editorial side of producing the magazine was, on the whole, congenial and relaxed. Both of us knew that this was something we didn’t have to do – it was not going to earn us any money or anything beyond a certain notoriety. Either of us could have opted out at any time but we chose to stay with the task of producing this silly magazine for a couple of decades before it died a natural death – not a painful death as so many little magazines do.

It is difficult now to understand the poetry scene of the mid 60s, especially the publication environment. The only poetry outlets were university based, a place for dons to publish each others scribblings – it was all very “Eng Lit.” and Anglo-academic. What chance did a couple of scruffy upstarts like us have of seeing their work in print?  One day we were crossing Green Park and heading (appropriately enough) for the wall of the old Darlo gaol – the infamous gay pickup Wall. We were having our usual whinge about rejection slips and the bastardy of the literary establishment in its failure to recognise our true genius, and then Rae uttered those magic words, “Why don’t we start our own magazine?” I was a little cautious but soon warmed to the idea.

Looking today at the anarchic content of the Fascist, it is perhaps difficult for you to realise that both of us took poetry rather seriously. I was heavily into William Blake, whilst Rae was more of a T S Eliot man. But, unlike the academics who produced the establishment poetry magazines, we thought that modernism had not stopped with Pound and Eliot. We were also aware of the American writers – of Kerouac, Ginsberg, Ferlinghetti and their British cousins like Adrian Mitchell and Roger McGough. We knew that some young Australian poets were beginning to write in this mode and that they too lacked any outlet. But we had no agenda. If poets chose to write in rhyming iambic pentameter, that was fine – they too could go to the ball. But not many did. The iconoclasm of the 60s ensured that the Fascist would habitually flout the canons of good taste.

And it was great fun. To produce a little mag with attitude gave us a lot of satisfaction and, along the way, a surprising amount of good stuff got published which would, in all probability, have sat in someone’s drawer until it got thrown out. Of course, some of  it should have been thrown out before it even got to us. The world would not be a poorer place without the works of Billy Ah Lun, but then we could not resist having a satirical dig at much of the pretentious crap that was the “hippie” version of poetry.

Then in 1971, I went to London for 6 years. In a pre-internet environment, my role as co-editor became rather detached. I soon found a group of English writers who were not averse to having their work published in the colony. Occasional despatches would be sent off to Sydney, where Rae would pick the poems he liked and blend them into the Australian material. Eventually another pile of badly printed Fascists would turn up in London and I would mail them around the UK to the poets who had by then forgotten they had written the stuff they now saw in print.

It was something of a relief to get back to Australia and to resume the normal function of  joint editing, if anything concerning the Fascist can be described as “normal.”

And so, whenever we felt like doing it again, we would meet and go through a large pile of paper, exercising our Friendly Fascist policy:

“We shall decide which poems to accept and the order in which they will come!”

Early in this period, my wife Ruth did a lot of typing onto Gestetner stencils and she is something of an unsung hero of the Fascist. Then came the era of the photocopier and the surreptitious use of the machines at one’s workplace – it was all in a good cause. It all seems so crude now in an era of scanners, digital printers and USB plugs but that too was part of its endearing charm.

Ladies & Gents – I give you Il Duce Amichevole!

John Edwards was a co-editor of Your Friendly Fascist from 1971 to 1986. During and after eidting YFF John was content to occupy various public service jobs. He claism that his Social Security Tax Manual was much more widely read than his poetry ever was. In recent years, he has replaced the juvenilia of poetry with the objective research of history, with particular focus on Australia’s colonial history. The result has been four books, the latest as yet unpublished.

More details of the launch of The Selected Your Friendly Fascist can be found at the Rochford Street Press web-site http://rochfordstreetpress.wordpress.com/2012/11/08/the-selected-your-friendly-fascist-pictures-of-a-launch/