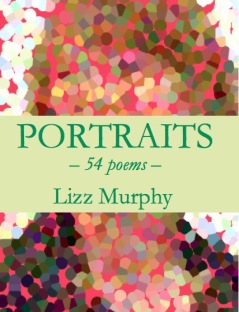 I was a little surprised to find myself thinking of Laurie Duggan as I read Lizz Murphy’s seventh (by my count) collection of poetry. Portraits consists of 54 very small poems – ranging from one to seven lines (with the exception of THE BUDGERIGAR which is almost conventional at 12 lines) and I made an immediate connection with these fragments/cameos/vignettes and Duggan’s use of the very short poetic form. In a recent review of Duggan’s The Pursuit of Happiness (https://rochfordstreetreview.com/2013/04/16/fragments-and-the-whole-mark-roberts-reviews-the-pursuit-of-happiness-by-laurie-duggan/), I commented on the “fragmentary” nature of much of his writing. Indeed, in Pursuit there were two sequences which consisted purely of very short three and four line poems (‘Angles 1-18’ and Angles 19-32).

But where Duggan often uses these fragments to build a much larger ‘whole’, Murphy is content in this collection to let these small poems stand by themselves without the shelter (wind break?) of larger works. Perhaps the cover is a subtle hint – large pixels seeming to form the suggestion of the poet’s face – drill down deep enough and everything breaks down into fragments.

Indeed the titles of the first few poems suggest there might be something in this with titles like ‘THE PORTRAIT, ‘THE MODEL, ‘MIRROR’ and ‘STILL LIFE’. But we learn quickly that this is not a conventional portrait:

and MIRROR is one of Murphy’s one line poems (one can’t imagine a poem much shorter than this two worder!)

There is also a playfulness to many of Murphy’s poems which suits the very short form:

– A SMALL POEM ABOUT WATER

As we start reading the poems in sequence, however, we can notice patterns forming. For example, immediately following SUBURB

While the pigeons which appear picking up crumbs in HOMELESS take a lead role in the next poem A PIGEON PAIR. Then there is again the playful interplay between poems in FLY and FROG.

There are also a number of poems in Portraits that suggest haiku. A PIGEON PAIR, for example, is a beautiful example of contemporary haiku:

the unexpected use of the word ‘roily’ frames this little poem perfectly and manages to convey an image of the dirty, muddy water in the pothole being stirred up by the passing traffic. In MONOPRINT we find what might be described as an extended haiku – it almost ticks all the boxes:

To return to the Duggan reference, Murphy, like Duggan, ethusiastically embraces the found poem . In between SHOP FRONT and ROADSIDE COLLECTION we have THE MASSEUR:

In Portraits Murphy has given us a perfectly balanced collection of tiny poems which fits the PressPress micro chapbook form like a glove. While being able to be slipped into a back pocket it is a volume of diverse content and form that rewards multiple readings. It will be interesting to see in which directions Murphy heads next.

Mark Roberts is a Sydney based writer and critic. He currently edits Rochford Street Review and is working on a collection of poetry.

Portraits is available from http://www.presspress.com.au/Murphy.html