The Conversation by David Brooks, UQP 2012 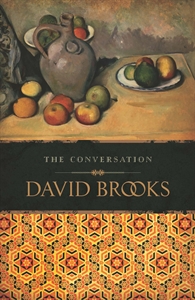 I have spent much of the last six months travelling and, as a consequence, much of my reading has been done on a device. For me this has been less than ideal. While ebooks may be convenient (under certain circumstances), I have been craving the feel of a ‘real’ book. My review copy of David Brooks’ The Conversation certainly satisfied my immediate craving. The hard copy is a stunningly beautiful book, the dust jacket is a work of art in itself – featuring a Cezanne painting (Still Life with Blue Drapery) which blends into the golds and yellows which feature in the rest of the cover design. And the book seems substantial – seemingly much more real than the files I had been carrying around.

And David Brooks can write. As somebody new to Australian literature this was the first time I had come across him and he impressed from the opening paragraph. His prose is clear and direct and we enter easily into the narrative:

But the area appeared empty and spiritless at this time between seasons, not to say windy, and left him with little to do but look inward. No problem normally, he tended to enjoy his own company, but he was in one of those flat places in his life, listless.

The novel opens with a delicious description of an aimless day spent wandering around Trieste – a city I assume Brooks knows well as his biographical note explains that he divides his time between the Blue Mountains in NSW and a village on the sea coast of Slovenia.

It doesn’t take long for Brooks to introduce one of the main themes of the novel – food. No sooner has the main character (we don’t know his name yet) arrived in Trieste than we read:

He had ordered a double espresso, asking for extra hot water to tease it out, and a plain croissant, dunking chunks of the pastry in the rich black liquid like a peasant…….the oily film it left on the surface, the delicious confusion of flavours in the mouth, a taste he had always associated with calmness, freedom, sunshine, mornings like this.

For me the rich descriptiveness of Brooks’ prose, how he writes of landscape, food and wine, is the strength of this novel – what kept me reading it. And in the final instance I did need something to keep me reading because there is, a least for me, a great weakness at the core of this novel.

The actual ‘conversation’ that gives its name to the title takes place in a restaurant over a long and beautifully described dinner. The male character is seated alone at a table outside having just ordered his meal, writing out postcards to his wife and children, when a gust of wind scatters the postcard. One of them is picked up by a young woman at an adjoining table. She holds it up for him, he comes over, they talk and then decide to share a table and the conversation begins.

This is the beginning of an extended cliché. The middle aged man divorced, remarried, discussing life – but mainly relationships, sex and desire – with a beautiful young woman who also seeks his advice on matters of the heart. It is, perhaps, a plot that is written by and for educated aging middle class males. I thought of a certain genre of French and Italian movies, the aging male lusting after the beautiful younger woman – perhaps with Gérard Depardieu playing the male lead.

He pulled away, gently and reluctantly, and tied to read her eyes in the faint light. They seemed to implore, but whether to kiss her again, to stay, to go, to say nothing, he couldn’t tell. She leant towards him, pulled him to her and kissed him once more, as long and deep, even longer, then broke from him, pushed him lightly but firmly away.

Of course he walks up the stairs and decides to turn and wave “ But there was nothing. Nothing. No car, no lights moving away, no traffic”.

And so my introduction to David Brooks was ultimately disappointing. He had promised so much, rich descriptive prose that brought place and food to life in front of me. But when he began to speak he fell into the old male trap. How much more interesting the conversation might have been if it had been with a woman his own age, exploring two different lives rich with experience. Or even with another male where both gradually open up and reach a shared intimacy.

But all was not lost. I have taken away from this book a very good recipe for battered zucchini flowers and there was enough to make we want to read some more of Brooks’ work.

Julia Miller is from Ireland is is currently travelling around Australia. She is currently working on a verse novel.

The Conversation is available from http://www.uqp.uq.edu.au/book.aspx/1220/The%20Conversation