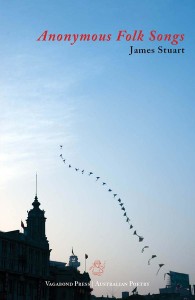 The title poem of Anonymous Folk Songs by James Stuart, “Anonymous folk songs from the Music Bureau” is an ad hoc assemblage of two worlds, the individual and the culture it commingles with, the progressive and the cyclical. His childhood behind him, the garbage collected and ‘a lazy afternoon’ begun, Stuart has only ‘the sound of Autumn rain’ and ‘the sight of it/ streaking a blackened window’ to contemplate whilst the quiet ‘revolution’ of dreams for ‘future ghost cities/…sky-scraped gestures…largely unaffordable for the likes of you & me’ finds its voice in ‘the boom times again’ and ‘from distant woods/ the high-pitched squeal of a circular saw rings out’. Everything finds its place in the restructuring and morphing of things, ‘bird trills punctuate a brilliant dream’ and the city finds its ‘shape’. History has its traits, ‘a thousand years pass, distant battles’ and even if ‘you like things fine/ just the way they are’ be casual, suggests Stuart, ‘and you jump on reality as though a freeway’. A family have their dinner inside after ‘the cold hours descend’ and their past is the song of a flute or wind instrument, forever absent but heard as nostalgia.

Like this and other poems in the collection, the human goes with nature in its compatibility with being, emotion, informality and sense of the real and authentic. Rendered mute by the surprising and sudden beauties of his natural surroundings whilst camping in “The romantic myth’, Stuart finds pleasure in the view of ‘a silver moon’, surprise delight in ‘a shooting star streak(ing) across a star-full sky” and joy in a dawn ‘sky gorged on pale blues’. But as a cultural product he relinquishes his subjectivity to the objective principle that really, there ought to be more to it (life) and in reality, after the star ‘nothing more arrives, just/ this desperate desert cold’. For Stuart it seems best to have both worlds, nature and the cultural quest for something else, not because he agrees or is disenchanted with the present but because this is his place and time.

What is most striking about Stuart’s poetry is the reverence for individual memory as a human need, as something to possess as the ‘ghost gum disappears into its sapling’. This poem, entitled “Into its sapling’ considers not only memory as a place of dreams but also free expression as that which is permissible on nature’s terms only. Nowhere, plausibly in this poem, is there a sense of the outside world; the couple are lost in their natural setting and at peace. Just as, in other poems, there is some justification for Stuart’s cultural conformity as he finds so far, accepting things has not reduced his freedom, downsized nature’s beauty or restrained his sex life. Sure, sometimes the carpet choice is ‘vulgar’ and you ‘can’t find a supermarket these days!?’ but in ‘Postcard for Marilla’ we read a portrait of a father trying to believe its child is growing up in a world of ‘marsupials/ you’ll never meet, even as they ghost/ across scrubland on the television screen’ and the adult responsibilities that come with this interaction between Stuart’s world and ours/theirs.

The poem ‘Double Happiness’ is a little like the Stuart personality of the collection, the romantic happily lost in the real world he is not only conscious of but worried about, someone else’s reality in which ‘happiness expands at the percentile rate/ of your income portfolio’. Nevertheless, there’s a trend observed in the arch of the Opera House and ‘the handle of that vintage vinyl suitcase/ you picked up for a fiver in Enmore’ so maybe the secret is to be yourself and get used to the idea. Above all, for Stuart the art of living is to know your time and place and then romanticise yourself into its absence where you can cradle your emotions and just watch the world go by, like, in “Sudden Rain, Tilba, Tilba” when ‘I slip underwater into turquoise light, towards/ sea urchins; the dream of abalone & bream’.

Replete with Chinese iconography, the poems are full of dragons and ‘paper lamp shades’, pagodas, temples and Gods. As Stuart makes mention of in his Acknowledgements, the book owes much to an Asialink Literature residency in Chengdu, China. It is to his credit that their inclusion contributes a great richness to the imagery and seem symbolic in themselves of an unexplained historical happiness he frequently mentions as important to his own absence in the real. It rains often, but never heavily, there are potholed streets and incense ‘instead of smog’. Old men ‘in their finest silks’ are playing ‘Chinese checkers to the tamarind/ flavour of candlelight’ and through the good and bad reigns peace albeit a harking back to the past, to a romanticism in which, as in the poem “Later, the Romantic period”, Stuart is forever seduced by and the ‘music of the Romantic period succeeds/ the contemporary and, for the first time, /seems real’.

It was a delight to read these poems. Are they anonymous? Most certainly not, the voice is consistent, contented, enthusiastic, humorous and unnervingly clever. But there are so many small songs to be heard in the landscape of his time and place that Stuart has done his artificial and natural surroundings a favour by ensuring no one’s ‘ditty’ is left out. When even the garbage truck siren can sound musical we know this poet is somewhere else in his perspective of the real. In the dream, his personal dream and with the quiet reader, letting them know no different.

Rebecca Kylie Law is a Sydney based poet, essayist and reviewer. Published by Picaro Press, her poetry collections include Offset, Lilies and Stars and The Arrow & The Lyre. She was short-listed for the Judith Wright Prize in 2012 and holds a Masters Degree in Poetry from Melbourne University.

Anonymous Folk Songs by James Stuart is available from http://vagabondpress.net/products/james-stuart-anonymous-folk-songs