The Special by David Stavanger. University of Queensland Press, 2014. 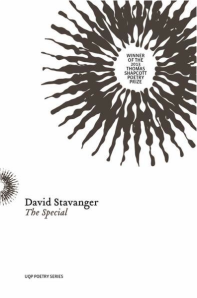 Within the health system the word “specialling” implies that, for various reasons, a patient is provided with one-to-one care. The Special is concerned with the practice of specialling that takes place when people, at risk of harming themselves, are placed under continuous supervision. This occurs generally in prisons and psychiatric hospitals and is colloquially known as suicide watch.

The Special, initially propelled by urgency and speed, becomes obfuscated by unperturbed acceptance. The sentiments fuelling this collection are, if not obfuscated than at least, restrained by a seemingly transparent nihilism described by Stavanger as, ‘the loss of agency, the Seroquel / mandala, the thoughts that walk.’

This nihilistic tone meanders the entire collection, which is comprised of a prologue, Axis I to Axis V, and an Appendix. Drawing on professional and personal experiences, Stavanger’s poetry playfully embodies desolation, allowing voices and subject matter to emerge from the tensions within disparities, and forming concepts of self and being that don’t coincide with what is stable, unified, or permanent. The first example of this is in the prologue, which offers various definitions for the word special:

adjective English
of peculiar or restricted kind. being other than usual

noun
a featured attraction of dish, at a reduced price

urban adjective
euphemism for having a behavioural or mental disability

Free of absolutes, The Special continuously examines and challenges accepted notions of sanity, disturbing and shifting binary oppositions such as sane/insane and doctor/patient, and exposing the nuisances and incongruities existing within the mental health net. As if playing tour guide, Stavanger’s poetry takes us from the courtyards of psychiatric wards to the front doors and neighbourhoods of people living with mental health issues; from the i-dotting and t-crossing of paperwork to the debilitating side-effects of psychoactive medications; from the utterances of doctors to the inhumane history of psychiatric treatment; from therapy sessions and online dating to the dissevering of familial ties. This book, rather than sinking under the weight of such heavy topics, is kept afloat with precision injections of humour.

Here the contemporary imagery of online dating is eclipsed by the dissidence within the RSVP profile. Throughout the book the absurdity of personality questionnaires, surveys, and box-ticking diagnostics develop a running commentary.

11. To be human is to
a) wear the right name tag
b) shower daily
c) give what you can’t give
d) fold back into the white

However, the power exerted by such surveys in assessing sanity, categorising, diagnosing, and changing lives soon extinguishes momentary humour. The first of nine staccato prose poems, ‘out of danger’, uses a curious combination of random phrases, performing what is known as “word salad”—a symptom of certain neurological disorders. This poem, embodying the possible severance between intended communication and actual communication, illustrates the absurdity of current assessment practices.

Stavanger explicitly refers again to this phenomenon during the second prose poem, ‘nobody whistles in the dark’, in the sentence: ‘in the ward no new words are welcomed, you can talk like a salad but you can’t ask for water.’ The discomfort produced by this sentence brings the reader’s attention—once again—to the undeniable power play resulting from discourse disjuncture: if one talks ‘like a salad’ and ‘can’t ask for water’ what chance do they have of appropriately answering the questions of generic assessments.

However, there are instances when attempts to denounce the system, destigmatise mental illness, give the disenfranchised voice, and expand audience awareness feels slightly dogged and laboured.

Occasionally, Stavanger’s use of repetition feels rhythmically counterproductive and forced. However, his poetry is accessible and his point is clear.

An eclectic collection, Stavanger’s poetry vividly portrays the reality of dreary confinement, lack of rights, and height of vulnerability that people suffering mental illness can be subjected to. Ultimately a denial of absolutes, the voices of The Special—at odds with the subject matter—form tight bonds through loose associations, create a multitude of tension within language, and encourage multiplicity in interpretation.

Based in Bangalow, Stevi-Lee Alver currently studies at Southern Cross University and nurses at the North Coast Cancer Institute. Her poetry and fiction have recently appeared in Writing to the Edge, Jabberwocky, and Northerly, and will be forthcoming in Coastlines 5, Homegrown Ghosts, and Questions.

The Special is available from http://www.uqp.uq.edu.au/Book.aspx/1305/The%20Special