One Hour Seeds Another by Andrew Burke Walleah Press 2014 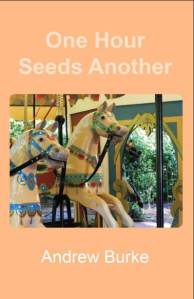 One Hour Seeds Another, Andrew Burke’s twelfth collection of poetry, is an important book and demands your attention.

This is primarily, of course, because of the quality of the work, which seems to me a landmark in Australian poetry. One Hour Seeds Another is a counterpoint of simple narrative, multidimensional confessional lyrics, complex religious and profane imagery, all beside and within the deceptively simple subjects critics have mislabelled ‘quotidian’.

More than this, however, Burke’s achievement in One Hour Seeds Another is the fusing together so many of the best tendencies in poetry that it feels like some kind of apotheosis. The ecumenical character of Burke’s poetry is also part of the man himself. As Andy Jackson pointed out at the Melbourne launch of this book (https://rochfordstreetreview.com/2014/08/15/a-disconcerting-bravery-andy-jackson-launches-one-hour-seeds-another-by-andrew-burke/), Andrew Burke turns no-one away: ‘…all poets are colleagues and poetry is democratic in the best sense’.

His refusal to be partisan to one form or school over another means he can move between classifications within a comprehensive and considered poetics, at times within a single poem, and choose his colours from a uniquely diverse and rich palette. Surrealism, jazz, rhythm and musicality, a kind of Australian formalism I’m yet to put my finger on (the whatever-it-is that a Geoff Page and a Robert Adamson have in common), Japanese forms: to Burke, these are tools employed to scratch at the rock face of poetry, not ideologies to use as broken glass in a fist fight. Each tool has an important job to do; no more, and no less.

This, perhaps to his alarm, puts Burke at the forefront of Australian poetry. The fusing of forms and subjects, an interest in most schools of thought without being a crusader for their cause, the sheer breadth and depth of knowledge of prosody, poetry and poetics sits under much of this work. While others are debating how to do the job by tossing useless barbs across the internet, Burke is doing it.

Andrew Burke gives away a rare clue in ‘Two Dead Matches’: ‘Why ask me. I like to live life in the rhythm section.’ He is feeling his way through the music of this collection. No prior knowledge of poetics and its controversies are expected or required of the reader; perhaps these poems should be listened to with the body like you would a drum solo, not over-analysed with the mind. They are expressive, emotional and Burke unifies their form with their intent almost perfectly.

For example, ‘Shikibu Shuffle’, a collaboration with prominent Canadian poet Phil Hall, is in part inspired by Japanese poet Murasaki Shikibu (973 – 1014) and jazz experimentalist Ornette Coleman, and works on a framework of Japanese forms.

I praise all swoops and calls

a left-footer’s choir
all language metaphor

All this manages to be uniquely Australian (in spite of its bi-national authorship of this one). Even when he messes with Japanese forms and experimental jazz, Burke meets my test for the importation of foreign forms into languages for which they were not intended: e.g., haiku in English must be good English poetry before it can be good haiku. There is a lot of feeling in poems like this, sometimes it only needs to be reached through the musicality of the phrasing and the images set against it. No agenda here, just like Ornette Coleman, who wouldn’t expect you to learn anything from him aside from the metaphysical lessons inherent in the experience of his work.

It is poetry like ‘Shikubu Shuffle’ that also confounds the too often repeated criticism of Burke’s work as ‘quotidian’. This does his poetry an injustice; if pundits and critics get away with this without appropriate extrapolation, then informed readers who approach this volume with those particular lenses will miss most of the show. True, Burke has in interest in the life he finds around him, but which poet doesn’t? Only those who are inept or dishonest. Burke does not embellish his life in the poems that are fitted up as ‘quotidian’, but takes it as it is and uses it as a framework for wringing out the poetry. And that’s how it should be. Poets who only write in aphorisms or ‘great thoughts’ bundled together in poetic forms or disparate lines too often seem afraid that their skills aren’t up to the job of revealing the poetry hidden in their daily circumstances. Instead they retreat into philosophical niceties or form tinkering or abstraction and obscurity. I’ll certainly confess this of my own poetry at times, and Andrew Burke was the first to point it out.

Among the extraordinary number of exceptional poems in One Hour Seeds Another are what Burke calls his ‘Notebook Poems’, which I gather are works masterfully excavated from the back catalogue of notebooks every poet lugs about. In these two poems ‘Notebook “singing they sang”’ and ‘Notebook (Darlington)’, I can see an Australian world transmogrified into an apposite and universal poetic representation of human experience. How many other poets can I write that about? ‘Notebook “singing they sang”’ binds Australian and American cultural influences into something unique: Burke thinks of Kerouac in the sparse Australian landscape, Tom Paxton and the Tasmanian Poetry Festival. He contemplates the music that exists independent of where it is sung. Any one of us could be in ‘Notebook (Darlington)’; for instance here I am:

in a cold
hillside morning
a boy repeats his callsign
…………..endlessly

The works to which I will return the most often in this collection are the ‘prose poems’. I’ve thought a lot about these poems, and have discussed them with the poet. They carry a powerful emotional charge. They sneak up on you. ‘Late Winter Night’ (the form of this one only verges on prose) is a contemplation of time explored through both an evening every one would recognise and ‘Berkeley Renaissance’ poet Jack Spicer: ‘The old dog is snoring…This poem has no birds in it, as Jack Spicer said some time/off’.

The two poems among these that caught me most deeply were ‘From The Centre Out’ and ‘Two Dead Matches’. Although an understanding of Ron Silliman’s ‘post-avant’ treatise The New Sentence is not required to appreciate the expressive power of these poems, it’s interesting to recognise that Burke is deliberately building on a tradition in language and poetics with these works. Phrases are repeated, and the poet appears in an almost renga-like dialogue with himself. The narrative and the phrases build and become more moving as each repetition is built upon those before and new lines introduced to elaborate the effect.

At the risk of upsetting people (including the poet) by using the term, ‘Two Dead Matches’, in particular, is a masterpiece of Australian literature. A review can’t do it justice; you have to read it, and I hope you’ll agree.

‘Last Rites’ is another poem alone worth the price of admission for this remarkable book. It’s a knot of mortality angst that fuses the modern with the avant-garde. I’m not sure how the critics of the ‘quotidian’ neatly fit this in their theory:

‘I shit with the dead’
How do the dead shit?
Their diners come to feast
corpus delicatus.

And for a final note, the poet who lives his life in the rhythm section summons Igor Stravinsky’s Firebird Suite and Karlheinz Stockhausen’s Stimmung to sit along side ‘tea and finger food/for the living’ for last rites. What a magnificent and fascinating synthesis of ideas.

Years ago a friend and I hypothesised that the character of a person can be measured by the books beside the bed he or she wakes up next to. I’ll be happily judged for keeping Andrew Burke’s One Hour Seeds Another on the bedside table and it’ll be there for a long while yet.

One Hour Seeds Another is available from http://store.walleahpress.com.au/andrew-burkes-one-hour-seeds-another/
.
.
Rochford Street Review relies on the support of its readers to continue. If you like what we are doing please consider making a donation. After costs are covered donations will be used to pay reviewers, writers and artists.