Open House by David Brooks, UQO 2015 was launched by Brook Emery on 26 March 2015 at the Common Room, Wolley Building at the University of Sydney 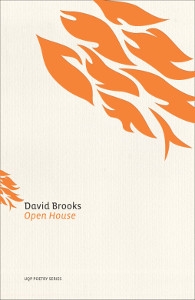 Open House is a big book, 150 or so pages as against the fashion for slim volumes. And, modestly, David has forbidden me to speak about him or it for more than five minutes. In that time I won’t be able to say much with much authority so, as an alternative, I thought I might just ask a few questions. . . which David is forbidden to answer.

Before I do I’ll risk spending 30 seconds on a poem by Jack Gilbert which, rather oddly, touches on at least some of the issues raised by David’s poetry.

Poetry is a kind of lying,
necessarily. To profit the poet
or beauty. But also in
that truth may be told only so.

Those who, admirably, refuse
to falsify (as those who will not
risk pretensions) are excluded
from saying even so much.

Degas said he didn’t paint
what he saw, but what

would enable them to see
the thing he had.

This poem is paradoxical when considered in the light of Jack Gilbert’s own poetry as well as David Brooks’s poetry because Gilbert is a truth-telling poet who has no time for pretension or obvious artifice – in another poem he speaks contemptuously of ‘newness strutting around as if it were significant. / Irony, neatness and rhyme pretending to be poetry’ – and he draws extensively on his own life for his poetry. As does David. I believe Jack Gilbert as I believe David Brooks. So, in the light of  such artfully lineated lines as ‘you / cannot not / utter you must / say, and say’ from the poem ‘Witness’ I’d like to ask David how much ‘truth’ and how much ‘lying’ is there in ‘Open House’? In case this is misconstrued I need to stress that I’m not speaking morality or absolutes here, I’m only interested in the process of making poetry, the marriage of observation and experience, invention and imagination. The art that goes into making a work of art such as these poems.

This leads me to a second question: ‘David, how do you build and shape a poem?’ At the back of this question is the response Henry Miller gave to the question ‘How do you work?’ Miller replied something like, ‘I stammer, I grope, I look for any and all means possible and imaginable.’ A number of poems in Open House  ponder this question more or less directly, for example, ‘Indian Mynahs’ where David writes of ‘how you need a nest or alcove / to lodge a poem in, how you / build it with whatever comes to hand, / stalks of dry dandelion, say, or bird feathers, twigs / of memory, fragments’, and the poem ‘Captain Hunter and the Petrels’ where he writes, ‘A poem is a place where you can bring things together, you / don’t have to know why. The mad and the bad, the / gentle and the dead, tooth-ache and heart-ache / and the ache and quandary of history.’ How is it possible, David, for poems to be simultaneously artful and artless?

A number of David’s poems begin, at least apparently, as he is washing up or making coffee and looking out the window, or standing in the shower, or waking at night. In an incidental, casual, almost diaristic way, he begins describing what he is thinking or what he sees and in this way he can move from Baudelaire giving his soul to poetry to cockroaches and slugs crawling across the floor, from a crow on a Blue Mountains Ash to a memory and ‘…  the pain and the confusion and the / embarrassment of it, the regrets and the / damage and the stubborn, un- / trackable grieving …’, from a Blue Mountains dust storm to the Taj Mahal, the Vatican, the Louvre, and back to the dust ‘burning /as the world / turns away from us / angry beyond measure’, or from almost anywhere and anything to almost anywhere else. In other words David gives us the moment, the trigger, the process, the mental and emotional journey, and the poem, a method which chimes with Howard Nemerov’s notion that a poem is not so much a thought as a mind thinking. I find this way of working very attractive, I like the thinking this mind does, the diversions and digressions it takes, the way it takes me with it, and the places it ends up. The journey, the conversation, is always worth the ride.

I’d like to remind David that he writes in one poem about a poet pronouncing, again, the death of poetry, and tell him I heard a poet ask the other day, ‘How can you possibly write a personal poem these days?’, and I’d guess both of us know poets who blanch at any appearance of the first person singular pronoun in a poem. Then I’d accuse him of writing a book which revels in the joy and importance of poetry and, in addition, one littered with ‘I’ and ‘we’. ‘Defend yourself, David,’ I’d say, ‘defend yourself.’ Defence, of course, is unnecessary, so consistent, so thoughtful, so self-aware and self-critical are the poems. They display none of the solipsism, sloppy thinking, self-pity and self-romanticising that may mar so-called confessional poems. The poems in Open House open up, they reach out to the reader rather than close down to the self. I am convinced that for David, ‘truth may be told only so.’ The poems are their own defence.

I have no questions about David’s, let’s call them, ‘animal’ poems. These speak for themselves too. And speak powerfully. They make me uncomfortable, they make me squirm. They are direct, they are clear, they take a stance, they are frankly polemical, but they are also poems. This is not a hint but, in this regard, I’m hoping David might read the really beautiful ‘Reading to the Sheep. These poems think through the language and the images, they don’t hector or ladle moralism on top of obviousness, even though, unashamedly, they seek to persuade. In the context of the whole book, in the context of what I see as the book’s overarching concern with how we should live in the world, how much we are in need of passion and compassion, they are natural and unremarkable, remarkable as they are. It should be noted that here, as with the confessional poems, David is ‘risking pretension’, not as we might understand that term in everyday parlance but in Jack Gilbert’s terms where risking pretension is a willingness to say openly ‘big’ things about, say, love and death and cruelty and that ‘big’, over-arching conundrum, ‘what is it like to be human?’ rather than hide behind neat, distanced, risk-averse, ironic, tricksy, little poems.

If I had time I’d ask David to tell me something about anger and something about love; I’d ask him about sadness and joy; and humour; I’d ask him about ‘seventeen kinds of death’ and ‘Seventy-Seven Stupidities’;  I’d ask him how Milosz stopped him writing poetry and how he started writing again; I’d ask him whether it is just my imagination or whether his voice, his poetry starts to change, become more urgent, with ‘Urban Elegies’, and has become ever more conversational and, simultaneously, more urgent, vital and uncompromising since; I’d ask David, and this is a very strange question given how direct and lucid the book is, what is Open House about? How does it see the world? How does it want to see the world?

I’d ask these last two questions because David’s poetry performs that magical, mysterious poetic trick of saying more than it says, and the ‘more’ hovers in the mind behind or underneath or in between or beyond the words.

But, as six and a bit minutes have ticked by, all I can do is ask David to read a couple of poems and, perhaps, the answers will materialise. At least, to go back to Degas and Jack Gilbert, you’ll have some inkling of ‘the thing’ David has, and how generously, how nakedly, he shares that ‘thing’ with us as readers.

Reading to the Sheep

It is a cold afternoon in early winter and my wife
is reading to the sheep the first departmental seminar paper
from her doctoral thesis while unbeknownst to her
I watch through the kitchen window. She is wearing
her winter jacket, and the sheep
in their thickening coats
are chewing on the already-stripped stalks of the rampant
…..mint
and what is left of the autumn grass around the potato bed.
The thesis is on the grief of animals and she is reading
about the mourning of chickens for their mates,
about the grief of calves for their mothers, mothers for their
…..stolen calves,
about huge elephants in the Kenyan dusk
turning over and over the bones of their dead,
she is reading about birds
placing branches over the bodies of their companions,
and about how, knowing they did not know, the Lord
of some people or another – maybe it was ours –
sent crows to teach them due
reverence and rites for the departed,
she is reading about ants, carrying away
so carefully the bodies of their fellows,
she is reading about dogs
starving themselves after the loss of their loved ones,
about dolphins holding, at the surface of the water, their
…..dying friends,
about macaque mothers carrying their infants
for months after the last breath has left them.
Now and again, when she pauses, lost
in the incipience of her own sorrow, perhaps,
or just asking for breath,
one or another of the two sheep comes to her
in the sad May twilight
and with the top of his head, where
the horns have not so long ago been sawn away,
nudges her hand
as if to comfort her,
or perhaps only to ask her to turn a page.

The light thickens, and a wind picks up. Ducks
settle about her, and the sheep
rest at her feet. Night
turns into day, then night, then day again.
Rain comes and goes. The seminar passes. Spring
turns into early summer, drifts towards autumn.
The sheep rise, stretch, graze, return,
leaves pile around them and are blown
away by the winds of another winter.
Your hair
turns grey – look at it! – and a million lines
comes to the backs of your hands.
You find this poem.
She is still reading.

Open House is available from http://www.uqp.uq.edu.au/Book.aspx/1336/Open%20House