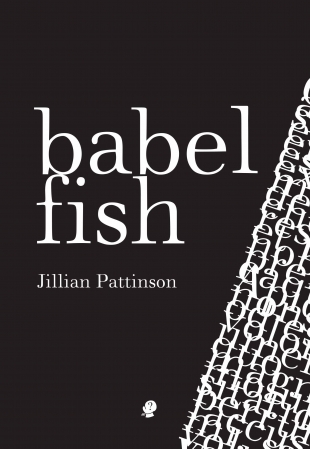 It is often considered bad practice to focus too heavily on the relationship between the title of a work and its content. It’s too easy an entry into criticism or interpretation, they say, an obvious foray – what ‘meaning’ does one lend the other? Yet Babel Fish, the title of Jillian Pattinson’s first collection of poetry, is such a perfect distillation of the work that it demands attention.

Babel Fish glides through the biblical, the linguistic, and the scientific with serene elegance. Each poem reads as a confident inquiry into the specifics of being, straddling the celestial and the terrestrial with ease. The story of the tower of Babel and the splitting up of language, along with other biblical narratives and figures invoked, lends the collection a religiosity that is simultaneously dissolved the non-scriptural, the biological. Take, for instance, the opening poem:

Fifty billion Ehux algae converge at the surface
of the Southern Ocean, their brilliance a mirror,
a mayday, that might well be mistaken
for the second coming. Heavy weather
blows up, scattering the host across the ocean
like so much spilt seed. But, even as it sinks back
into the abyss, each algae glows. Even washed up
on an empty beach. Even in the gut of a cuttlefish,
a lone E. huxleyi deciphers capillaries of internal ink
in light of its own bioluminescence. So much
to wonder at in the single cell of this simple being.
As if, by some trick of osmosis, it has plumbed
the essence of the Buddha’s own fading illumination—
make of yourself a light

With the eye of the biologist, attuned to the poetry of science and the natural world in a manner not unlike Rachel Carson, Jillian Pattinson reminds us of the interconnectedness of all things. The ‘uni’-verse is exploded, splintered into ‘multi’-verse, but through a kaleidoscopic lens of what already exists – established disciplines and discourses. Keats said Newton destroyed the beauty of the rainbow by explaining where the colours came from, but Dawkins argues that knowing where the colours come from enhances the beauty of the rainbow. Babel Fish appears to share this attitude to science and enquiry, locating beauty in origins, causation and explanation. Pattinson explores the celestial and the terrestrial, the corporeal and the ethereal in a way that seems to say I have not combined these polar opposites, but rather discovered them already united, one and the same, disgruntled at their separation.

Indeed, what is striking is how disarming Pattinson’s collection is. As a self-declared ‘avid reader’ I was embarrassed by my own surprise at the interdisciplinary nature of Babel Fish. Not only does the reader encounter different fields, modes of enquiry, and poetic forms, but ever-expanding subsets coexisting harmoniously. On the whole, disciplinary boundaries are becoming more porous, more permeable, yet it is testament to the tunnel vision that has so characterised ‘uni’-versities that the idea of a decompartmentalised and integrated world is so novel. Babel Fish says that what we see when we truly look is an inextricable ecology of life.

By focusing on the biological/botanical in Babel Fish, I don’t mean to suggest that Pattinson’s poetry is limited in its subject matter. Pattinson simultaneously probes the quality of taciturn lives, the workings of those people whose quiet veneer masks layers of deep feeling. Take the following excerpts from the poem ‘The Still Point’, which won the inaugural UTAS Place and Experience Poetry Prize:

At the still point of the turning world – T.S. Eliot

Only here,
in the crease of the map,
in the midst of things,
are we so placed,
so oriented.

From the bank
the river moves slowly.
From the water
the ground shears
and slides away.

‘The Still Point’ speaks of the folded quality of a moment in time, oriented by the narratives within which it is encased. This notion is reminiscent of Nabokov’s predilection for the substance of units of time, or of Blake’s depictions of the finite and the infinite residing in the same symbol.

Here you float
face down,
eyes open,
searching the rocks
and shadows below.

The deep pool holds you still
against the slow turning
of the world.
Here you well up,
you eddy.

Standing
chest deep amid the river,
all you can’t see
pouring
into all you think you know.

Her command of rhythm and repetition makes room for thoughts to echo; the patterns of imagery and phrases create sonic ripples that reflect the routines we fall into and which shape our lives.

In a recent interview with the Australian Poetry Podcast, Andrew Burke stated that poets must school themselves in the traditions of poetry before attempting to shake off their shackles. This is of course a rephrasing of the old adage that one must abide by the rules before they can be broken. The truth in Burke’s words can be illustrated by Jillian Pattinson’s poetry. Pattinson utilises a number of recognisable forms alongside free verse; such forms include portrait, lyrical, imagistic, narrative and ekphrastic poetry. Further, the second section of the book, ‘The Night God Introduces Fox & Cat to Crow’, functions as an embedded verse novella. The effect of such multitudes of form and thought is ‘kaleidoscopic’, which indeed comes from the Greek terms kalos and eidos meaning ‘to examine beauty.’

Babel Fish is an accomplished debut collection and a deserving recipient, in its manuscript form, of the 2010 Alec Bolton Prize.

Charlotte Guest is the Publishing Officer at UWA Publishing, and a first class Literature Honours student from the University of Western Australia. She is also a regular reviewer for The Australia Times Theatre magazine. Her work has been previously published in a number of journals, including dotdotdash and Run Rabbit Magazine.

Babel Fish is available from http://puncherandwattmann.com/books/book/babel-fish/