Something is Said by Lidija Šimkutė, Lithuanian Writers Union Publishers 2014 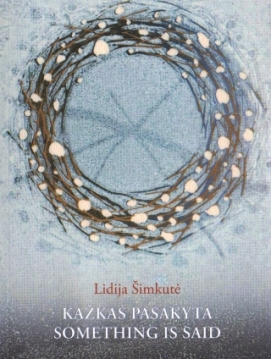 ‘There is a kind of contempt in the act of speaking’, Nietzsche wrote in one of his cheerier moments. I think it articulates what the more garrulous of us feel after a day of too much talking – or too much listening. Lidija Šimkutė, who divides her time between Adelaide and Vilnius, is perhaps more economical than anyone writing in Australia today. Very few of the poems in this 144-page Lithuanian-English edition are more than a page, the lines are generally short – rarely longer than six syllables – and most poems have fewer than thirty words – including the titles which are the opening lines written in capitals. Everywhere the abundance of white space seems to underline the motifs of silence and quiet so prominent in the poems.

Šimkutė’s poetry is a contemplative and an exacting art with a proper reverence for the writer’s task and the limits of language. It may sound like an austere – almost monastic – project, ill-equipped to compete with the noise of our century. But the clamour and constant muzak of the contemporary world is just what makes poetry like Šimkutė’s necessary. We need the right words – the right kind of eloquence – to both renew the language and recommend quiet. Šimkutė’s poetry is part of an Eastern European tradition that is burdened by the past, and therefore skeptical of the embellishments of rhetoric. Its return to the fundamentals or bare bones of language constitutes a kind of forgetting that the poetry paradoxically presents as remembering. ‘Silence’, a word repeated throughout the collection has a personified, eerie presence, that can just as often be the silence of horror as of wonder; as often the silence of contemplation as that of the grave:

into the sea
and emerge as islands

I become the flowers
turn greener than grass

is a perfume
about me

It is poetry grateful for what remains. Its truths, as its silences, are hard won:

no bird’s song saddens the air

As with most Eastern European poets, Šimkutė is incapable of triviality. Whatever the subject – solitude or language, love or nature – the physical and metaphysical are inseparable and the sacred merges with the material, as it does in icons.

The addressee – the you – of these pieces, as in so many of the poems, seems in constant flux, shifting in interesting ways – blurring the line between reader and speaker, everyman and poet – and the sparse punctuation adds to this satisfying ambiguity. In places the imagery can be almost unbearably realist, as in the end of WIND KNOCKS:

But it can also veer toward the surreal:

TO FIND THE MOON

In other places Šimkutė is richly allusive, as in the detail that ends THE BALTIC STORM:

a sparrow dropped
a wing in my mailbox

Such lyrics are fragile but tough. Fragile in the sense that a misplaced word might upset the delicate balance but tough in the best minimalist traditions: in their subject matter and in the fact that they are elemental and essential in a way that may remind readers of Serbian poet Vasko Popa’s Quartz Pebble Poems.

As we learned from Spinal Tap there’s a fine line between clever and stupid – fans of the film will remember their minimalist, black album cover. So too in minimalist art and poetry the line between the banal and the transcendent. Šimkutė is aware of this danger and, while these lyrics are simple and short, they are only occasionally slight. As there is very little to hang a judgment on, I should qualify that this seems more a matter of taste than discrimination. Take the short lyric below, typical in its uncomplicated syntax and diction. I like it but – if you don’t – there is little fodder for argument:

sun hides
its gold
in the trees

Although richer in metaphysical possibility, the following lacks the same impact:

A THOUGHT OF EARTH

upon a seat of sky

Such poems – few in number – will be different for each reader, and, as with the brevity of haiku, can hardly be resented.

Though Šimkutė’s poetry has been praised by JM Coetzee for its ‘purity’ and ‘receptiveness to the world’, and has been anthologised recently by John Kinsella, it remains relatively unknown to readers in Australia. I hope Something is Said will redress this.

Besides poetry, Aidan Coleman writes reviews, speeches, and Shakespeare textbooks. His most recent book, Asymmetry (Brandl & Schlesinger), was shortlisted for the Adelaide Festival Awards for Literature and the Western Australian Premier’s Book Awards.

Something is Said is available from https://www.knygos.lt/lt/knygos/kazkas-pasakyta–something-is-said/