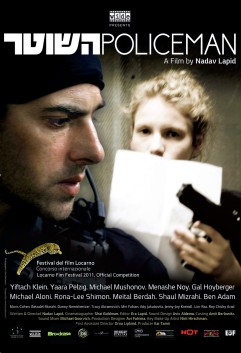 A young man, in peak physical condition, just emerged from a shower and wearing only a bath towel, dances to a pop song in front of his pregnant wife as she lies on the sofa. Neither of them smile, as one would imagine a young couple might out of affectionate embarrassment; they are both intensely serious, as if everything they do, even the silliest endearments, are heavy with purpose.

Nadav Lapid’s Policeman, set in present day Tel Aviv, is about the narcissistic nationalism of Israeli youth. Almost all of the characters are young 20 somethings, as healthy, prosperous and well-educated as their western counterparts, but distinguished by a willingness to breed (the young wives have at least three or four kids) and an intensity of belief that has all but vanished from the west. This is a youthful country, prone to the kind of social turbulence that results when such a large proportion of the population is possessed of big ideas and no memory. The beliefs and ideas are not religious, but entirely secular, centred on the nation and its institutions. The young man dancing for his wife with a seriousness that suggests a homage from the Books of Samuel, is a member of an elite anti-terrorist police unit. He is utterly devoted to nation; his work, his wife and child, his relation to his colleagues, everything he does is in the service of the state of Israel. Even eyeing off the hot chicks at the bar is done with a righteous intensity as if obeying a law laid down in the Old Testament (David and Bathsheba). His antithesis is not a Palestinian terrorist but a middle class Tel Aviv girl who, with a group of friends, is plotting to perform some emblematic act of terrorism to highlight social injustice in Israel (a kind of Israeli Baader Meinhof) but full knowing that such an action will bring instant deadly response from arguably the most efficient security force in the world. This girl’s anti-nationalism is the perfect inverse reflection of the policeman. They are essentially the same young Israeli; the Janus face of Israel, now sundered by the bristling defensiveness of a state permanently on the point of extinction. When the police unit liquidate the group with their laser-sighted guns, the policeman doesn’t have a memory to make sense of what he recognises in the dying girl’s face. He experiences the split in his feelings (satisfaction at an efficient kill, distress that it’s a Jewish girl) as an incomprehensible lack.

There is a historical lesson here. The only ‘old’ character in the film is the father of the slow witted boy who realises his son’s infatuation with the beautiful terrorist girl means he’s going to join their suicidal plot. He knows this because he does have a memory. When he was a young man he wrote articles for a left wing newspaper calling for exactly the kind of action these kids are now about to take. Perhaps he’s aware of the growing and deadly schism in the state of Israel? Perhaps when he was young, the nation was closer to that originary unity of its postwar founders (one of whom, David Ben Gurion, was a communist as well as a Zionist) – Israel as the last bulwark for the Jewish people against a sea of enemies (The Nation), and Israel as Zion, the metaphysical sanctuary of all dispossessed and persecuted people, including the Palestinians dispossessed by the state of Israel itself (The International)? Stephen Spielberg’s Munich also dealt with this paradox of Israel, but he and Lapid are allowed to discuss such questions, I’m not, except to say it’s one of those contradictions that makes history such an exciting subject!

You can find out more about Teasing Threads here:  https://rochfordstreetreview.com/2015/07/10/introducing-chris-palazzolos-teasing-threads-sundry-film-and-literary-criticism/