The Vine Bleeds by J M Yates, Brolga Publishing 2015, was launched at the Burwood Campus of Deakin University 28 November 2015 by Karen Le Rossignol. 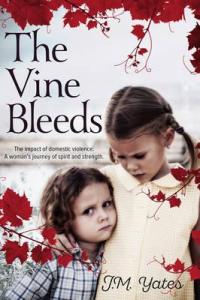 This is a special day….the culmination of what feels like a birth process – we are here to celebrate the birth of a very special book, this memoir by Jenny Yates, The Vine Bleeds.

Memoir can be defined simply as a history of people or events from personal knowledge.
Why write rather than simply tell others? It is to explore memory, the whole urge to tell stories, and the need for resonance or ongoing meaning for others. Memory drives memoir, ‘…but it can take writing to realize that while we thought we were just living, history was unfolding’. This is a quote from the TriQuarterly website, which debates issues of creative nonfiction and memoir.

This book, The Vine Bleeds, provides delightful and graphic descriptions of several eras – World War Two, living in Ormond and its shops, doughnut vans and the fairs and circuses, going to dances on Saturday nights, getting a job as a young single mother, the early days of IT… But it also does more than these evocative descriptions.

‘Nonfiction often achieves its momentum not just through narrative – telling the story – but also through the meditative intelligence behind the story, the author as narrator thinking through the implications of the story, sometimes overtly, sometimes more subtly’. Phillip Gerard wrote this in 2005, and it has become a major interest in exploring why we write – it is worth asking what purpose Jenny had in writing this book.

Vulnerability is a part of the answer. What is the link between confessional literature and memoir? There are literary and historical links between ‘confessional’ literature and memoir that originate in the writings of Augustine and Rousseau. Confessional writing, Sala argued in 2013, demonstrates vulnerability, and is thus a useful tool for engendering trust and engagement with the reader, who perceives the ‘vulnerable’ writer as being ‘earnest to the point of compromising himself’. While we find the term ‘confessional’ problematic when discussing the modern memoir form, and suggest alternatives such as an ‘openness’ or ‘frankness’ when revealing expressions of human frailty, it may be useful to think, as Sala does, of the effect of frank and revelatory first-person writing as ‘decentering the authority’ of the memoirist, engendering vulnerability in the writer and her narrator/protagonist, and thus creating a connection with the reader (Sala 2013).

Memory is being interrogated by The Vine Bleeds. Memoir, as the process for interrogating memory, is the interpretation of events through the lens of experience that enables understanding of an individual consciousness within a context of the wider world.
Truth is an important consideration for the memoirist. How much to tell? Gerard writes of the responsibility of the writer in crafting that truth as:

Giving the reader a clear signal about exactly what kind of truth you’re claiming – literal truth of event, emotional truth, truth by hypothetical illustration, approximate truth of memory, or merely the truth of intuition guided by special insight. (Gerard 1996: 123)
Jenny unleashes her vulnerability, she is interrogating her memory to find her forms of truth. She does so with a special insight into family violence and childhood memory. This book, and her purpose, is a search for emotional truth within the literal truths she describes. It is a great pleasure to declare The Vine Bleeds launched and ready to share that emotional truth.

For information on how to purchase The Vine Bleeds go to https://thevinebleeds.wordpress.com

J M Yates discusses the writing of The Vine Bleeds