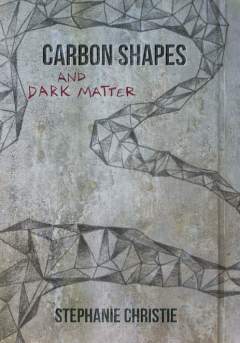 The title comes from a line in one of Christie’s trickier poems, “Look inside the things we know/ to carbon shapes and dark matter/ maintaining the flash flood of her smile.” This verse appears on the back cover. Perhaps a reader understands this is not as straightforwardly complex as one may think, from simply reading the collection’s title. These poems do quite a few twisty turns.

Christie explains life lately without directly mentioning too many dire, broad world concerns, but instead takes those as an atmosphere. She then shows what contemporary life may not easily address day-to-day, (making visible her desires), or discusses what occupies her days, (watching others, discussions, feelings about infringements, shelves in a mall and cleaners there)…. We see too how she intensifies attention, wishes for better, maintains dialogue… and what springs to mind therefore.

Profound ideas surrounded or held with the most charming, simple, believable imagery. Statements strike a reader then with more clarity and resonance. In fields and areas of what Christie makes us see or smell or hear etc., abstract ideas appear as if we’ve thought of them ourselves in our daily life. How excellently the poem Clod, page 27 races about rather randomly through so many situations, as one person addresses the other about tasks and events. The mundane, (“we’ve grown up and can pay good rent”), the ridiculous, ( a moon shrieking), the difficult, ( growing unstuck and turning bad or attracting it), the contradictions, (“Do not follow any instructions./ Hold me”), the worthy, (“…keeping out/ of power’s way,”) then stating with delicate sureness something that may give anyone genuine strength, and hope.

Our precious business is to stand
each moment as it comes.

Contradictions and tensions appear well realised, in a context of care and thoughtfulness. This poetry explores genuine worry and even terror with something like kindness, or at least restraint. Considering the extraordinary ideas and events mentioned, at times, Christie’s ability to carefully present what many wish they could discuss, and find hopeless, is admirable. Bloom, page 39, a lovely title which leads however to lines about heat, rage, the lack of air conditioning for some people, water shortages, and –

I watch my back
……………..which really is impossible.
I don’t know what I’ll do
if I have to fight the neighbours for water
or for our beliefs.

A sense of trying to find language to explain away impossible awfulness and worries, with too surely a growing need to stay loving, aware, as the measure of what’s best, emerges. Christie debunks naysayers by saying a conspiracy is not necessary for this mess to exist, and explains our current crisis world-wide as if she’s watching ink fall into clean water and changing it, blooming.

So much stated with so few words, and massive shifts without seeming to have done much at all, rather like watching a dance by someone truly athletic and artful.

Also, the language enchants and amuses, apart from anything to do with broader meanings necessarily. A pleasure, phrases like – “…When people sleep together/ their dreams entangle.” and “Most of our minds are underwater.” Also, some lines sum up a character so well, so chillingly in this case that you read on in fear but also, engaged due to the dry humour. “You make war sound fun.”

In some ways this collection represents a manual for surviving our difficult present moments, like the title suggests, with a scientific clarity to much of it. In the poem, Crossing the Park, page 8, Christie clearly and somewhat happily at first, describes various young people someone could meet. The kids are classified according to how dangerous they seem to be, and the poem ends with a play on punctuation, which lightens its otherwise grim assertion.

…it’s wise to be scared of.

Christie brings a sharp intelligence to her writing, softened at times by a genuine playfulness with language, as if mere meaning is not as important as enjoying oneself. Then, also insights reveal valuable ideas, presented in myriad ways. Perhaps occasionally somewhat chaotic arrangements of introverted lines may not always serve the poem well, when the subject appears worried, but rarely does that happen. A certain grace and care is evident usually, along with admirable originality and clarity.

The fact that Christie has also bravely addressed many topics which a number of people could find impossible or extremely difficult to discuss, has to be seen as one of the main strengths of this collection. Poetry allows us to find our way indeed to the drives and mysteries behind such simple gestures as a smile, or why someone could find washing their car a time to pause for thought. Christie presents a fine collection here, and I trust many readers enjoy it.

Raewyn Alexander, novelist, poet, non-fiction writer and lately working on graphic poetry about her love for fiancé Chris Knox – Nowhere and Nothing (but Love). Hamiltron: City of the Future published her growing-up-in-the-Tron comic, 2015, and she has work in the Three Words comic anthology. Residing in Tamaki Makaurau Auckland, Aotearoa NZ and descended from French, Irish, Scots, and English, she has published seventeen books including the Five star review third novel, Glam Rock Boyfriends, which is available on Amazon. Raewyn can be found at http://poeticjourneytoamerica.blogspot.co.nz/ and more information is available at – www.bookcouncil.org.nz/writers/alexanderraewyn.html

Carbon Shapes and Dark Matter is available from http://www.titus.co.nz/bookshop.html