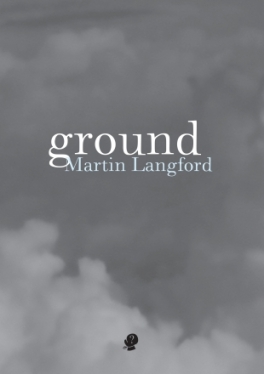 Reading Martin Langford’s ground made me long for the kind of mood state celebrated in the Rick Springfield song ‘Free and Easy’. In this tense, studious collection ‘just knowing that you’re there’ is not enough to sustain happiness and ‘waking in the morning’ doesn’t illicit a casual ‘walk by the shore, miles from everyone…feeling free and easy’. So instead, here we are in Australia, you, me and the next door neighbour wondering with great angst why the climate isn’t great, the future looks bleak and the past is too miserable to forget. What’s needed is a beginning and the ground is a good enough start excepting that’s in trouble too- the clay is cracking and dried up, roads ‘shimmer, tacky with heat’, the ‘bleached grasses’ are dying and what is more, the sky here only ‘swells’ and the sun is ‘colourless’. With such constant negativity I wanted some sense of an RU OK day just to check if Langford’s insistence we never arrive anywhere and it is impossible to ‘articulate home’ was a nationwide catastrophe waiting to happen. A sort of where have I been all this time if this is what is really going on in Australia (says Langford with a wink and a nudge).

This is a poetry of disjunctions, of the pull of the wild that can’t sustain its original intentions, of the unsettled and the pathetique. The human gazes at its world looking for something and nature carries on its persistent evolutionary tumbles and turns; but always in reaching out or even meeting our utmost energetic states we are forced to recede again to ‘sorrows of the limpid and mild’. What happened was Captain Cook came and ‘planted a flag’. Our soldiers ‘died at Gallipoli’. First they said ‘nobody lived here’ then ‘they made room for Indigenous people’. And for that, the massacres and the silence, the absences and the emptiness (of spirit) there is the ‘working out what to do next, and then doing it’. There is a fight going on, a struggle to settle in and settle down but Langford is dismissive and wants to dance. After all, in “Broken Bay”, where there is a will there is way: ‘back in the suburbs/ the small rooms light up/ for the night cliff’ and ‘shearwaters shoulder/ the bomb of the wind’.

In the heart of Sydney’s CBD ‘someone/ keeps making a point but the listeners/ vague out when the seagulls tilt sideways’ and this is either the malady or upside of living in Australia: language matters less when the ‘air…is swarmed by a perfume called “Distance”/….and ‘there’s a breeze/ off the river so faint it’s like breath on the skin’. Here, the best conversations come in the wind or are summoned by the gaze but never form words: instead, find the ‘gaze of an other’. Good sense is like ‘woodsmoke-and-lassitude days in the streets without trees’, of little consequence or meaning for the intransience of living in a country whose histories are so eclectic even your own can be untold ‘heart-work’, a granted legend. The point is we are all here together, scrambling for place, for destinations, a sense of arriving ‘home’. But with consideration for the wildflower principle, there is another way to bloom and that is to amble and plonk respectively: for ‘beauty is not destination’. Which begs the question what was land first but ‘a clearing of prayer for our barley’. Or ‘a meadow at Windsor with hayricks and steeples’, a ‘pastoral idyll’, a ‘dancing-itself of the rhythms of seed-life’, the ‘site of our stories/ our lost child/ our sorrowing ground’. And then that familiar retraction, a kind of Langfordesque erasure: ‘what was this land?’

In ground everything is a problem because, like Eric and Annersley, the two dozer drivers who don’t gel, living in Australia is complex, complicated. There are animosities but in the end, we have to work the same land ‘because we are clever/ because need is tough’. Here, there are ghosts of soldiers ‘whose footsteps..echo in halls like important, dull songs’, crows who ‘tell the plain, not the kind truth’ and ‘thrushes…cuckoo-shrikes- / carving dusk-contours and -hollows’. And the ‘impulse’ to dance, ‘a sun of participants dancing/ a source/ not a grief’. That way we might ‘get the weight of this place/ in our bodyminds’ and in dancing help ‘the small creeks run clear again/ …the firetails and wrens to come back/ …our own understandings…/ specific, loose-limbed’.

On “The Kingfishers Wings” beautifically light can refract from the sorrows, deaths, dismissals and shadows to the ‘azure’ of our attention, our tears, our desire for flight from/ out of the mire. In ground meaning is lower case and simplified, less a definition and word than a sense of something to look at and look around from the vantage point of feeling it beneath you…Like a poetic encyclopaedia of Australia’s transition from paddock to city, from ship to house, war to a makeshift peace, ground is sensitive to its subject matter and respectfully inoffensive. Its gaze is studious and uptight and captures details with such eloquence they almost seem caught in the lines of their stanzas, prized or wittily expressive. The subheadings assist an orientation through what seems otherwise a hike through a terrain of surprises and eccentric journeys. Alas, you don’t feel ‘free and easy’ reading the collection, being in Langford’s world for the 155 pages of poetry, but you learn something and perhaps that too, is time well spent.

Rebecca Kylie Law is a Sydney based poet, essayist and reviewer. Her poetry collections include Offset, Lilies and Stars. The Arrow & The Lyre and In My Days and In My Sleep  (May, Interactive Press). Other  publications include Notes for The Translators, Poems for the Young Chinese Adult, Best Poem Journal, Australian Love Poems 2013, Southerly, Westerly, Rochford Street Review, The Australian, The Euroscientist Ezine, The Lake, Pacific Poetry, Spiritus and Assisi: An online journal of Arts & Letters. She is currently completing her Phd at the UWS. Rebecca Kylie Law was Rochford Street Review’s featured writer for Issue 16  https://rochfordstreetreview.com/2015/10/06/featured-writer-rebecca-kylie-law-biographical-note/

ground is available from https://puncherandwattmann.com/books/book/ground