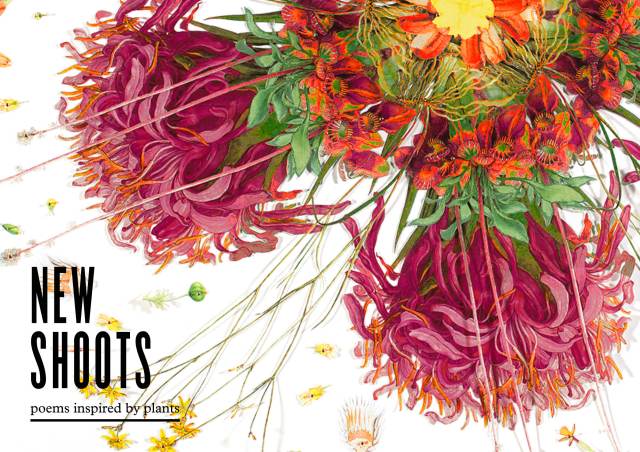 Issue 19 of Rochford Street Review is proud to publish a plant inspired poem from each of the New Shoots commissioned poets, Mark Tredinnick, Eileen Chong and Eric Avery. New Shoots is a thoroughly engaging poetry project that reconnects poetry, place and the environment developed by The Red Room Company. New Shoots was launched at the Royal Botanic Garden, Sydney on Saturday, 21 May 2016 as part of the Sydney Writers’ Festival. Mark Tredinnick’s ‘Lotus Pond’, Eileen Chong’s ‘Elizabeth’s Dream’ and ‘Passage of Time’ by Eric Avery are all inspired by specific sites in the Royal Botanic Garden, Sydney which celebrated its 200th birthday earlier this year. The Botanic Garden, Sydney is in the process of mapping the poems to their sites of inspiration with ‘poetic pathways’ and developing a New Shoots website which will inform the readers as to the history, science, ecology, and surrounding environment of the poet’s chosen spaces.
Rochford Street Review would particularly like to thank, The Red Room Company Director, Tamryn Bennett without whom, Issue 19’s showcase of the New Shoots poets would not be possible. We hope this Issue will encourage you to write poems inspired by plants and trees wherever you are in Australia or overseas.
Read more about New Shoots from Zalehah Turner at Rochford Street Review

Mark Tredinnick
Mark Tredinnick is a celebrated poet, nature writer, writing teacher, and memoirist. He lives by Sydney Harbour at Kirribilli, and he travels widely in Europe and America as a poet and teacher. He is the New Shoots Poet in Residence at the Royal Botanic Garden, Sydney for 2016. Mark’s many honours include, two Premier’s Literary awards, the Blake Poetry Prize in 2008, the inaugural Montreal Poetry Prize in 2011, and the Cardiff Poetry Prize in 2012. Mark is the author of thirteen books which include three volumes of poetry, Bluewren Cantos (2013), Fire Diary (2010) and The Lyrebird (2011) and one CD, The Road South (2008). He has two collections of poetry forthcoming this year, The Days and Nights from Pitt Street Poetry and Walking Underwater from Hip Pocket Press in the US, as well as a memoir, Reading Slowly at the End of Time.

Eileen Chong
Eileen Chong grew up in Singapore speaking English, Hokkien and Mandarin and has lived in Australia since 2007. She wrote her first collection of poems, Burning Rice (2012), through an Australian Poetry Fellowship in 2011-2012, personally mentored by Anthony Lawrence. It was first published through The New Voices Series, an Australian Poetry and Express Media partnership in 2012 and reprinted by Pitt Street Poetry in 2013. Burning Rice was shortlisted for the Anne Elder Award, Australian Arts in Asia Award and the Prime Minister’s Literary Award. Her other books are Peony (2014) and Painting Red Orchids (2016). She is the New Shoots Poet in Residence at Bundanon Trust for 2016.

Eric Avery
Eric Avery is from the Ngiyampaa, Yuin, Gumbanga and Bundjalung people of NSW. His practice as an Indigenous, interdisciplinary artist is based in dance and music. Eric has an ancestry of strong, resilient, creative people. Eric aims to revitalise the languages of the First Nation through his practice. Eric describes speaking his ancestor’s tongue as a transformative experience. The different intonations inspire and inform his music. For Eric, engaging with the language of his ancestors is a continuance of his people’s culture. Through sharing his experience, Eric hopes to encourage a rediscovery of the lost or endangered languages through his poetry and interdisciplinary art. He collaborates with Wiradjuri/ Gomeroi poet Lorna Munro in PoeTRIBE, creating musical compositions punctuated with poetry which convey the modern, Indigenous experience as well as, strengthening their ancestor’s culture, language and law through reconnection.

Zalehah Turner is a Sydney based poet, writer and critic currently completing her Bachelor of Arts in Communications majoring in writing and cultural studies at the University of Technology, Sydney. Zalehah is an Associate Editor of Rochford Street Review: https://rochfordstreetreview.com/2016/02/09/welcome-zalehah-turner-rochford-street-review-associate-editor/