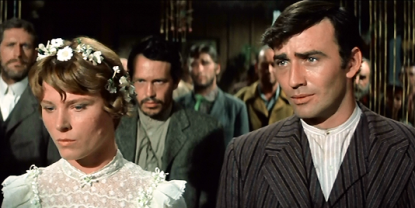 In Sam Peckinpah’s 1962 western Ride the High Country, the two old gunslingers employed by a bank to transport gold from a mountain mining town speak the dry-eyed wisdom of high-plains lore; the young buck they hire as a hand brawls and wenches but quickly learns right from wrong after a couple of knuckle sandwiches; the girl who flees her abusive father accompanying them into the mountains in order to meet her fiancé soon works out she’s safest behind the shoulder of one of the gunslingers when the fists fly and the guns are cocked; and when the fiancé turns out to be the wrong kind of ‘family man’ only the gunslingers can save the girl from a horrible fate. Here we have the architecture of the classical western; masculine wisdom and strength presiding over two kinds of untamed nature; one petulant and naïve, but with a little bit of physical persuasion learning that only law and order promises life and love and permanence; the other corrupt and ‘fallen,’ fit only for eradication either by imprisonment or death.

But Ride the High Country signals the end of the classical western, and, Like John Ford’s The Searchers, the transition into the revisionist westerns of the 1960s. It does this by a dangerous flip-flopping of two hierarchical elements which radically alters the classical codes. First of all, the gold which the team is to transport, and which should be the main plotline, turns out to be little more than a pretext; the object of a somewhat half-hearted subplot where one of the gunslingers plans to rob his old friend, and the young hand has to decide who’s side he’s on. What becomes the main plot, that is to say the object of most of the subsequent actions and motivating lusts has nothing to do with the gold, but in fact centres on the girl. In a shocking sequence which can only be described as a malignant overcoding of the classical western’s ‘romance code,’ the girl is married in the mining town’s brothel with the prostitutes as her bridesmaids, and then passed among her new husband’s five brothers. If a pack rape is averted by the timely intervention of the gunslingers, the classical form is under pressure for the rest of the movie because the overcode has sent the narrative scudding off in a completely unexpected direction.

In the classical form, romance and sex is subordinate to economics and law, which themselves are modes of epic balances (seasons and generation). This is true of films such as High Noon, My Darling Clementine, and 3.10 to Yuma. The woman is a fickle element whose function is to test the moral sturdiness of the male protagonists.  Her sexual capital (beauty, youth, spirit), like other forms of wealth such as gold, may be crucial to the narration but is ultimately controlled and renounced before the manly business of the shootout restores law and righteousness into the epic cycles. These codes are reasserted at the end of Ride the High Country too. Manly honour is restored in death for most of the males including the brothers. But the depravity of the marriage sequence sends such a shock through the rest of the film it’s as if one of the elements mutates into a monster leading everything chasing off in the wrong direction. It reveals a ‘fallen’ world where history has pulled apart the human from eternal cycles and left us with commodity markets, divisions of labour, and the evil that breeds in degradation and greed. The classicism is kept intact by the steady nerves and agnostic wit of the old-timers. Their conflict (over the gold) serves to test their claims to wisdom and authority. But like a pair of Don Quixotes their knightly virtues seem destined to pass away with them. The motivations of the brothers (sex slavery) are so perverted they rattle through the last act like evil horses pulling a covered wagon so fast it starts to fall to pieces. Realising the horror they’ve let loose, the filmmakers desperately attempt to lash the collapsing thing together with ropes and occy-straps long enough to have the brothers suddenly marching like toy soldiers to a glorious death we just can’t believe in.