The Curtain Breathed Deeply is showing at PICA, Northbridge from 17 September to 30 October. 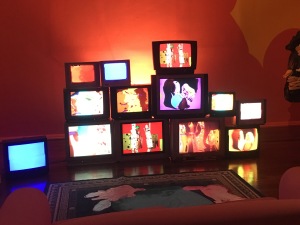 PICA gallery is currently featuring an installation by Justene Williams, rich with textures and colours. The Curtain Breathed Deeply comprises of a series of constructions, initially concealed by a large blue and gold patterned curtain. The massive drape is thickly decorated, yet sections have been removed, offering snatches of insight to what will follow. For Williams, curtains are selective concealment. They invite and distort, but ultimately are flexible and full of life.

Sound plays a key role in the installation. Rhythmic tones with occasional bursts of discord are played at various stages of the exhibit, imparting a disruptive sense of ritual. Couches have been set up in front of some of the televised sections, yet the structure of the exhibit demands that you keep moving. Indeed, movement dominates the installation. Curtains keep moving, television screens flashing, and a particularly key-catching series of dancers and wide-eyed owl puppets flit across the projector screens. The exhibits “breathe”: they move, but there is a rhythmic certainty to it, undercut by the unsettling music. Garbage bags layered with handmade felt mushrooms and mould are suspended from the ceiling. There is life here, but it is always followed with some grimmer reminder. 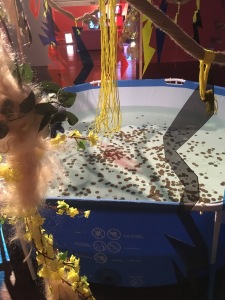 Williams’ use of colour and texture is bright, obtrusive, and catches the eye from all angles. However, the majority of her materials appear recycled; these are familiar domestic objects given new life. A paddling pool, scattered with coins, takes the centre of the room, screened off by long tresses of wool, plastic flowers, wigs, and cut-out lightning bolts. The pool’s warnings of death by drowning remain plainly in sight; this is a familiar object, childlike and surrounded by fantastic constructions, but connected with reminders of mortality. There is an underlying sombreness to the installations in general, linking with ideas of Dadaism and surrealism. At the same time, there is a sense of ritual; of familiar items made more whimsical via artistic means that invoke strong senses of the handmade, direct, and personal.

The exhibit has been dedicated to the life and works of Williams’ father, and the curtain forms a rich motif of both invitation and soft denial – reminiscent of a hospital curtain, but also creating a gentle delineation of spaces in which life in all its complexity and confusion can proliferate. This is a surrealism that is rooted in notions of life and the familiar.

Siobhan Hodge has a doctorate from the University of Western Australia in English. Her thesis focused on Sappho’s legacy in English translations. She is an Associate Editor at Rochford Street Review, Reviews Editor for Writ Review, and contributing reviewer for Cordite. Born in the UK, she divides her time between Australia and Hong Kong. Her chapbook of reflections on Sappho, Picking Up the Pieces, was published in 2012 as part of the Wide Range Chapbooks series. She has also had poetry and criticism published in several places, including Westerly, Limina, Colloquy, Cordite, Plumwood Mountain, Page Seventeen, Yellow Field, Peril, Verge, and Kitaab.