“I was a Cafe Poet at the Blackwattle Cafe in 2013 in Sydney. During my residency, I worked on a book project called L’Esprit du temps / The Spirit of the Time, a collection of poetry in French and in English with photographs. The book was published last December by Les Éditions prise de parole.”- Daniel Dugas 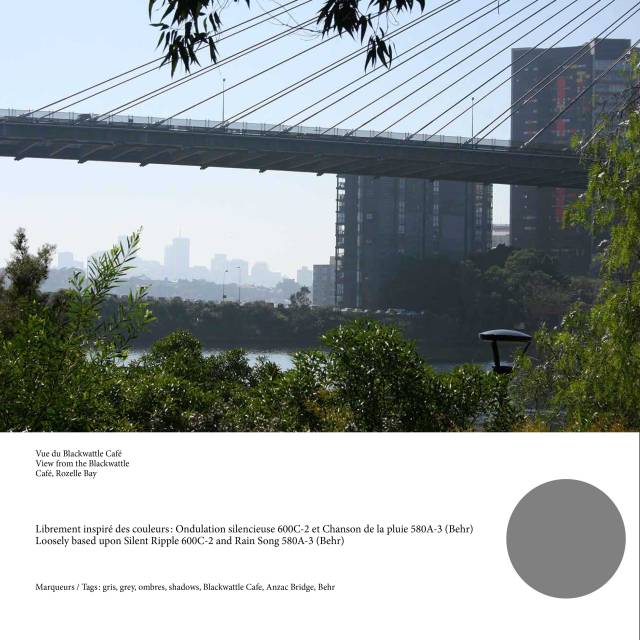 Here I am, sitting at the Blackwattle Cafe. The air is humid, fresh, invigorating. The doors and windows are open. Customers are coming and going. The sound of spoons and cups clanging seems familiar. The morning fog is slowly dissipating. I see the Anzac Bridge stretching across Sydney Harbour. There is a continuous flow of trucks, cars, buses, and I see a few pedestrians walking like floating shadows. The buildings in the distance are still shrouded in the mist. The landscape fades away; the transparent city hangs only by a thread.

It is the first day of my project and I am here to write about colours. At first glance, what is striking at the Blackwattle is the walls. The building, once known as The Bellevue, belongs to the city and was renovated a few years ago. There was a will to bring the house back to its former grandeur. As in an archaeological dig, the walls were carefully scraped to reveal all of the tints that were used in the last centuries. The result is breathtaking, a snapshot of all of its lives.

Powder Puff: The English language introduction from L’esprit du temps / The Spirit of the Time by Daniel Dugas

The Spirit of the Time, a project based on words and colour, was created in Sydney, Australia during a residency with the Café Poet Program of the Australian Poetry Association. Coffee houses have always been inspiring locales for poets and the goal of the Association was to revive this connection. My office was located in the Bellevue, a large Victorian house owned by the City of Sydney. In 2012, this 19th century villa on the shores of Blackwattle Bay was transformed into what is now known as the Blackwattle Café. It is a magical place with breathtaking views of the harbour and the Anzac Bridge; the staff is inviting and the coffee, superb.

German lithographer and engineer, Harald Küppers, said that man could distinguish 10,000 different shades of colour but that his vocabulary for describing them was limited. If colour is an element of joy and surprise, the names invented by paint companies suddenly become surprises within surprises, an explosion of possibilities. No longer bound to a limited set of descriptors, our world of colour has become Gypsy Moth, Powder Puff or Chocolate Cosmos.[1]

Both words and colours are vehicles that move the emotions, the symbols of our desires and our hopes, the emblems of our determination to face reality. But words do not function in the same way as colours. While a blue pigment is blue because it absorbs all colours except blue, the word blue does not absorb or expel letters of the alphabet. Instead, words provoke our imaginations, carry fragments of fiction.

I set out with the idea of using commercially available colour palettes as cues and I picked swatches from Benjamin Moore, Ralph Lauren, Behr, Earthpaint, Taubmans as well as others. Every day, on my way to the Blackwattle, I would take photos of objects or scenes that stood out: a bright yellow safe in a window display, a discarded VHS tape left in the garbage, a Chihuahua waiting for his master. I made detours, took different routes altogether to discover other neighbourhoods in the city. At the Café, I would begin by studying the images for emerging meanings while searching each photograph for two colours, especially for the two that seemed to be vibrating with the most energy. I would then work through the mobile applications supplied by the various paint manufacturers to find matches for those two colours. The colours and their marketing nomenclature, as well as the source images themselves provided the base material for my writings. The Spirit of the Time is also a translation project. The texts were all written in either French or English, and then translated into the other language, a process which provided many cross-pollination opportunities. Sometimes it simply enhanced the original version, at other times, the text was transformed. Whenever a paint company did not provide a bilingual name for a colour, I translated it, keeping as close as possible to the original. In order to share links to each week’s poems, I created QR codes and posted them on the walls of the Blackwattle Café.

More than the hues, the names of colours are cultural reflections of certain moments in a timeline. They express the Zeitgeist, the way we were, the way we are, or the way we would like to be tomorrow. They are: The Spirit of the Time.

‘Transparent City’/ ‘Ville filigrane’, ‘Snapshot’/ ‘Instantané’ and ‘Powder Puff’ (an introduction) by Daniel Dugas were originally published in L’esprit du temps / The Spirit of the Time (2015) by Les Éditions Prise de parole. All images and text are courtsey of the author.

Daniel H. Dugas is a bilingual, Canadian poet, videographer and musician. He has participated in festivals, literary events, exhibitions, and performances internationally. His ninth book of poetry L’esprit du temps / The Spirit of the Time was published in December 2015 by Les Éditions Prise de parole. The Spirit of the Time (2015) is a collection of photography and poetry in French and English that Daniel created during his residency as a Café Poet at the Blackwattle Café, Sydney in 2013. Daniel’s work has also been published, in French and English literary magazines in New York, Ontario, New Brunswick, Belgium and France.

Zalehah Turner is a Sydney based critic, writer and poet currently completing her Bachelor of Arts in Communications majoring in writing and cultural studies at the University of Technology, Sydney. Zalehah is an Associate Editor of Rochford Street Review: https://rochfordstreetreview.com/2016/02/09/welcome-zalehah-turner-rochford-street-review-associate-editor