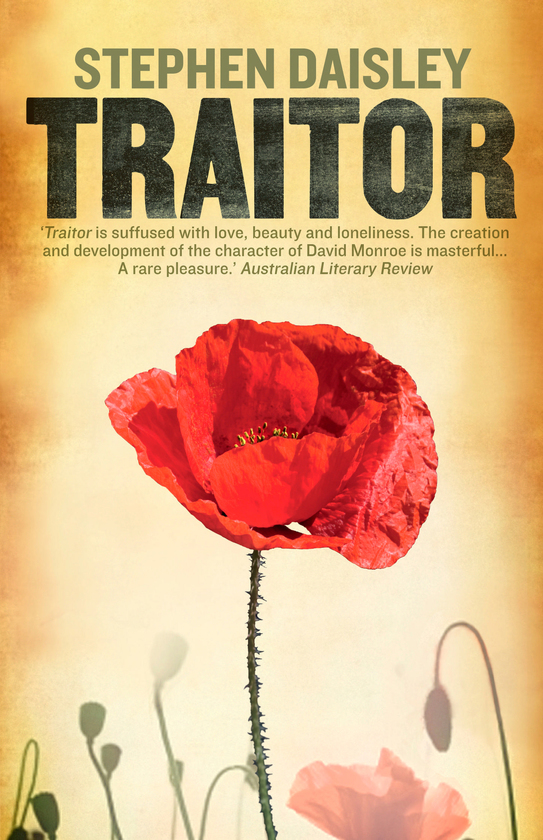 Some national mythologies cry out for re-examination, especially after they’ve been around for 100 years. One such myth is that of ANZAC, which last year marked its 100th anniversary. I can think of no better re-interpretation of the ANZAC myth than Stephen Daisley’s novel Traitor.

Time in this novel is very complex, but can be reduced to two absolute pasts; the closer, but still closed off past of 1940s rural New Zealand, and another, further back past of the Gallipoli campaign of 1915. Each of these pasts slip and shift into the foreground of the narration like shifting plates of memory and presence. The lapidary style of the novel gives a pebbly consistency to these plates, as if a life consists of tiny stones of poetic events and recollections that together in the course of growth and change begin to look fluid, like tectonic movements make solid rock look fluid. The big guns of Gallipoli set the plates in motion; their sound reverberates through the novel’s thirty year time span.

If one lays these pebbled plates out flat one can see that the presence is that of a farmer in New Zealand working his cold paddocks. Solitary, largely avoided by his neighbours, he is harassed by military police because he was court martialled for desertion in the First World War and so is seen as a security risk during the Second. The memory is of the circumstances that led to his desertion 30 years prior; as a young soldier in the ANZAC – a shepherd boy in uniform and with a gun fighting in a war he knew nothing about – he befriended, while on sentry duty, a maimed Turkish doctor who was a POW and tried to set him free, but was captured, court martialled and instead of being shot sent to the next worst thing, bomb disposal in no man’s land on the Western Front.

The memories of what he did, and what he lost, are what sustained him in the terrible decades of loneliness and ostracism that followed. These memories go to his motives. This is the central mystery of the novel; why did he set the enemy doctor free. I would summarise it this way – moved to pity by the doctor’s suffering, enchanted by the doctor’s Sufi words, his mind pummelled to a perpetual present by non-stop bombardment, the young shepherd soldier turned to god. His foolish act on this conversion meant surrendering himself to the harshest judgement of the world of nations – treason. The nation brought the full weight of this judgement to bear on him and crushed his sovereign subjectivity, but in the process saved his soul which, freed by the act of love (setting the doctor free) was purified by the abnegation that followed. The love meant more than just treason. It was also a breach of faith which can only be described as apostasy; the act and the love which motivated it effectively amounted to a conversion from one native faith of nation and people to a higher faith of God of all humanity (conversion is always to a higher faith).

From the perspective of a military mythology, the soldier is a weak-minded fool, and the non-military purity of his motives count for nothing in that judgement. But the ANZAC myth is unique among military myths in that, despite attempts to jingoise it, it remains a negative military myth; first of all, it commemorates a defeat; and second, it honours the Turkish defenders. But this is because ANZAC is not a military myth at all. It is, in fact, a tragic strophe in a pastoral epic. The Gallipoli campaign echoes deeply in the Australian and New Zealand psyches because it melded so poetically into the long pastoral eras of those countries; geopolitical events as mysterious to the Australasian mind as the inner workings of the seasons suddenly causing the deaths of thousands of young men; an event so inexplicable it seemed like a catastrophe of nature. The mythology is wide open to metaphysics. Traitor subverts many received notions of ANZAC, but without ever diverting from a logic intrinsic to it; mateship elevated to the love of an enemy soldier, not out of a desire to see that soldier’s country win, but out of love of his godliness. Where in the myth of Agincourt for instance would there be room for an English soldier to desert with a Frenchman? No matter how pure his motives might be, Agincourt is a glorious myth of victory for the English, so his actions could only ever be conceived of as treasonous. By following rigorously the trajectory that the ANZAC myth points towards (and which no other novel has ever done) Traitor moves us beyond nations and peoples and even histories to an event of cosmic significance; the making of a Holy Idiot.

Teasing Threads is Chris Palazzolo, novelist and poet, editor at Regime Books in Perth, radio host on 6EBA FM North Perth, and was, until recently, manager of one of the last video shops in the world.

Traitor is available from https://www.textpublishing.com.au/books/traitor