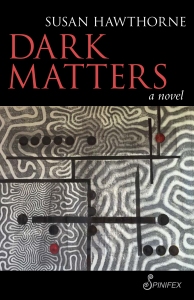 Dark Matters: a novel by Susan Hawthorne is a fascinating book which tells the story about women, their lives and their myths in a post-modernist style. Through diary sequences, poetry and narrative, we get to know Kate, Mercedes and Desi.

Kate and Mercedes were in a relationship, but their destiny took them through the cruel road of the dirty politics, where men abuse and violate women’s rights and bodies through torture. Desi is Kate’s niece, who like a patient embroiderer, stitch by stitch, is able to capture not only the cruel reality of her aunt’s experiences but also her inner strength. Intrigued by her aunt’s relationship with Mercedes and their political involvement, she travels to South America, visiting Argentina and Chile the country where Mercedes was originally from.

Hawthorne states that she started researching for Dark Matters in 2002 and I am not surprised. This book is a treasure of knowledge, not only of the dirty wars in Chile and Argentina but also of history, mythology, language, psychological and cross-cultural issues.

The author very cleverly presents reflections on language, particularly the language of poetry. The reader encounters profound thoughts that take them through the possibilities of words, lines and letters. It is admirable how Hawthorne teaches without preaching, shows without overwhelming and presents facts without being pedantic.

As a psychologist, I was impressed by Hawthorne’s ability to portray the mind of a character who has been deprived, not only of her freedom but also of any sensory stimulation.

Desi travels to Argentina where she visits ESMA, the centre of torture where many women were violated and tortured during the military dictatorship in the 70s. Desi, trying to understand her aunt’s past, reflects on the nature of the torturer and how true her words are: ‘The torturer is not after truth. Not even after information. The torturer wants to break the person who is subjected to pain, uncertainty, disorientation and humiliation. When it comes to women, the torturer wants to inflict shame on her. To do this, he will reduce her to her sex, by which he means her genitals.’

Hawthorne has created a character who is fully fleshed, Kate is not a cardboard cut-out. The reader learns about her past, her love and her ancestry. She was a prisoner, but only her body was imprisoned because her mind was never captured.

Kate relates myths and stories, creates poetry and beautifully describes her inner world. Kate’s inner strength reflects an inner strength that I imagine most lesbians in the past had to have in order to survive abuse, pain and persecution because homosexuality was previously considered a crime, a sin and a mental illness.

Hawthorne has managed to deal with a horrific topic in a beautiful and poetic manner. Very skilfully, she utilises short sentences to manage the tension and the drama. Even in the darkest moments, there is relief in the profundity of the thoughts, in the poetic narrative, and in the inspirational strength of Kate.

Dr Beatriz Copello writes poetry, fiction and plays. Her poetry books include Women Souls and Shadows, Meditations at the Edge of a Dream, Flowering Roots, Under the Gums Long Shade, and Lo Irrevocable del Halcon (In Spanish). Beatriz’s poetry has been published in literary journals such as Southerly and Australian Women’s Book Review as well as in many feminist publications. She has read her poetry at events organised by the Sydney Writers’ Festival, the NSW Writers’ Centre, the Multicultural Arts Alliance, Refugee Week Committee, Humboldt University (USA), and Ubud (Bali) Writers’ Festival. She received an Emerging Writers Grant for Poetry and in 2003 she was awarded a Doctor of Creative Arts Degree (Creative Writing) from the University of Wollongong.

Dark Matters: a novel by Susan Hawthorne is available from Spinifex Press