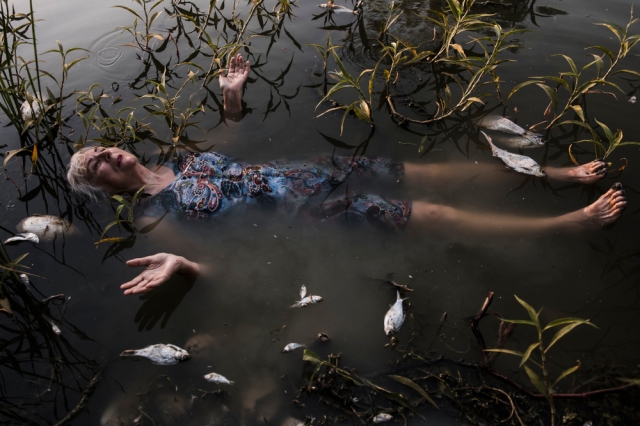 Having heard the sickening news of the fish kill in Menindee I drove there as soon as I could. Because of the current drought, high temperatures and long term bad, if not corrupt management, the lower Darling River was infected by blue/green algae (a pernicious growth that poisons warm, tepid water). Then a drop in temperature killed the toxic algae bloom. When it dies it decomposes and siphons oxygen from the water, suffocating the fish. It’s estimated a million fish died.

Thinking about it during the long drive from Sydney, having recently re-read Bruce Pascoe’s Dark Emu, I contemplated ways of embedding myself/us, white Australians, into the catastrophe. Maybe push my pale feet amongst the fish carcasses, into the mud and algae-infected water? My hands? Millais’ painting of drowning Ophelia popped into my head but how to photograph myself with no assistant or tripod? Fortunately I met photographer, Melissa Williams-Brown in Menindee who loved the idea immediately, and we worked together to stage and shoot the performance for camera, Menindee Fish Kill.

Synchronicity was the order of the day.

Ophelia’s pose and facial expression were a perfect quotation – chest heaving, she sinks into the water, her hands raised in helpless supplication. Her eyes gaze into the middle distance, her face in shock.  I’m immersed in gross toxic water, dead fish, maggots, a fly on my face. My garment’s paisley pattern – fish shapes/tear drops, but also signals colonial appropriation – the   pattern originated in the Middle East and India. The  Scottish town, Paisley, copied the pattern, claimed and named it.

Australian artist, Bonita Ely’s cross-disciplinary artworks explore environmental and socio-political issues. From the 1970s she has forensically photographed the ecology of the Murray River and its environs, witnessing its decline.  Representing Australia in Documenta14, 2017, her installation in Athens, Plastikus Progressus, addresses the plastics pollution of water’s trans-ecology. In Kassel, Germany’s iteration, Interior Decoration, evokes the inter-generational effects of PTSD as an outcome of war.  Dr Ely is Honorary Associate Professor, Art & Design, University of New South Wales, Sydney. She is represented by Milani Gallery, Brisbane. https://bonitaely.com/