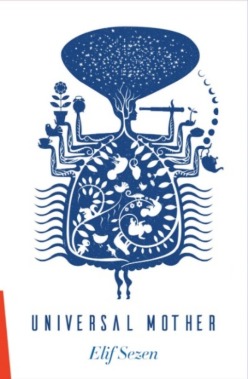 Elif Sezen is a talented Australian poet who grew up in Australia and in Turkey, she writes poetry both in English and in Turkish and is an interdisciplinary visual artist with a PHD in Fine Arts. Sezen’s poetry takes the reader on a cross-cultural trip where we encounter poems, which reflect the adaptation of a migrant to a new culture and a new of way of life. She also takes us into ancestral trips, into memories of far away exotic lands and on trips, which appear to arise from the deepest corners of her creative mind. Words shaded by culture, the female essence and the enigma of living adorn the pages of Universal Mother.

This poetry book is intriguing, not only for the content but by the way the poems have been set on the page, the break of the stanzas and the number of words in each line. The poet’s experimentation with the settings and the inclusion of spaces in between sentences works in some of the poems, but in others these elements are superfluous and it takes away from the beauty of the poems. When it works it makes the reading interesting as the graphic setting somehow enhances the narrative.

In Sezen’s poetry there is a sense of love and lost, disappointment and renewal, revival and rebirth. In “The city of Pierrots” she says:

With passion, intelligence and creativity the poet also embraces lust and death, bereavement and nostalgia. Sezen says in ‘Little things’:

We find in Sezen’s poetry layers of realities, one on top of the other; the writer also becomes different people or presents different versions of herself, as well as different identities with a layering of emotions, these are evident in ‘The book of Broken curses’:

His stars flitting about
the more you fix a look upon him
the more he runs away
Seeing yourself in him is one grace,
getting lost with him is another
dismissing these facts is my labyrinth
my dearest sherbet-soaked pain.

A pragmatic idealism is present in some of her poems where the romantic idealism flowers alongside the cruel reality of life. ‘Atomic survival’ is poignant, vivid, and brings into the light the possibility of the unthinkable. This is a long poem where, a disruptive narrative joins the personal with the collective.

Expect the unexpected in this collection, in some poems do not read for meaning read the beauty of the words, which have been strung together like a pearl necklace — give the words your own meaning.

Elements of the collective unconscious are present like the archetypal mother, dreams raising questions about reality, we also encounter science, the self, and the mundane. In Sezen’s words we can deduce not only the old Shakespeare’s phrase “to be or not to be” but also the “to know and not to know” like how it transpires in ‘Rose-pot poem’:

In this red
in this non-self realisation
in this put within glitters
in this being put
in this domination of light black over dark black
in this absence
in this absence could one become imprisoned in a split-second wholeness.

Many of Sezen’s poems are thought provoking and would surprise you with the unexpected. Has the author arrived at her destination? Does this question have an answer? She searches for cues in the past and in the present while the future remains a conundrum. In “Which masquerade” she goes beyond the common ground understanding of birth and death. In this poem, rebirth appears to be an option: a Galatian male dies and is reborn as a woman. Is Sezen referring to her ancestors in her: the magic of DNA that makes us live in the generations to come? You decide … In this poem she says:

When my wife lost her sight, so did I
I was seeing butterflies but not the brutes
Seeing the rainbow but not the ruins of rocks
From then on my moustache was blue
…………………………….‘How strange’
I was saying to myself
……….‘even colours are in battle between the heavens and hells’
Then I opened my eyes in Egypt, my breast grew

Later in the poem the author says:

So I did
I died again and I came back again.

In some of the poems there is excessive repetition of words, when for effect, less number would have been more impacting. For example in “Guest”, a short poem of very short 24 lines the poet utilised the word ‘let’s’ nine times. Here are some of the lines:

In a few poems, there is very little imagery and too much telling. This is surprising as most of her poems are very rich in vivid and beautiful imagery.
Nevertheless, Universal Mother is an appealing book to read, it would lead the reader to ponder, to imagine what lies behind the words on the page, to create mind gardens with Sezen’s seeds, to generate associations. I highly recommend Universal Mother.

Universal Mother by Elif Sezen is available from http://gloriasmh.com/books/universal-mother-elif-sezen/