Who’s Broken is This? and Other Poems by John Passant, Ginninderra Press 2018 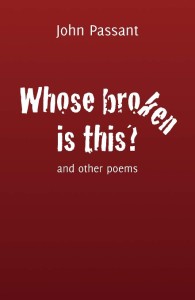 A serious-looking cover of rich, dark brown with white lettering, some of the word “broken” falling apart and down, but also it seemed possibly forming as well a set of difficult steps to climb back up? A glossy finish, and the book design seems deliberately reminiscent of the more well-produced protest poem books of the early to mid-20th century. The style intrigued me, with its retro feeling. A definite fresh approach evident too. Reassuring to gather a signal of what to expect.

These poems visually command attention with capital letters starting each line, they flow down the side of the page as if something strong and certain is about to be shown. Passant’s poetry does fulfill such impressions, satisfying and following through, dependable and trustworthy. At times the poems seem remarkably narrow but they’re are always expertly edited.

Contrasts within Passant’s work make for a lively read, wasting no words, he has a masterful, energetic way with the words and often uses a strong tone. He also
directly addresses what he wants to say with a passionate, grand and sincere manner. The work is never pushy appearing seemingly almost relaxing to read
I re-read a few poems to enjoy them thoroughly as Passant’s work can reveal more and more on subsequent readings.

I was told by the then editor of Poetry NZ, Alistair Paterson ONZM, that how a poem looks on the page is always important. Passant has, in this book, taken taken a more traditional way to format poetry, and it works very well visually.
After reading Who’s Broken Is? we can feel like we draw close to knowing the writer quite well, taking in how they write, what form the poems take, and the details of style used. These poems offer a passionate and heartfelt feeling to serious issues, and the poet appears well read, original, and forthright, with strong nuanced views.

I found the tone In, Whose broken is this? and Other Poems serious and accessible, using plain but extremely carefully chosen words. Each poem is built and drawn well, making them individual and complete. In one verse to the next, the writing sometimes takes a leap from one setting to another quite effortlessly, at times covering complex settings and meanings, leaving the reader feeling almost invigorated. Most poems also leave a true sense of place and people, genuine individuals, true sorrow, troubles, pain, injustice and other trials too. The experiences are focused, individual and true-to-life, quite moving as well or extremely touching now and then, even devastating.

In ‘What time is this?’ Phones appear silent and forever now has a limit,

Passant’s political, poetic work may affect people’s future actions, inspiring or sootinge. Also, directive writing may drive us to take strong actions, taking up arms against an enemy, inspiring protest in public, writing to politicians, starting alternative schools or businesses, and more. Poetry may challenge some of our ideas, and it can be political in that way asking readers to account for themselves. Passant’s work deliberately references past, similar protest poems and politically-charged work. He addresses and describes personal politics (how people work together), and the work addresses genuine causes and problems, of today. Some poems appears hopeful about saving human habitat for future generations.

Passant addresses those who question authority in our, “Monochrome world of liberty,” in the poem, ‘Citizen’, with someone stating his knock knees are free and so will they be,

Soon very soon, In our jails of freedom, You cannot beat ’em!

Clumsy humour slaps up an oppressive message making it all the more frightening. Read between the lines, invent what’s going on. The old saying – The first casualty of war is truth is well shown in this funny yet frightening poem. Humour is not real, the name of the Citizen is only a number, nothing good it seems will happen.

‘To help my daughter’ shows a personal quandary wondering whether to stay put, relying simply on communication technology to assist his offspring, or to fly to help her. The poem beautifully expresses making up one’s mind, describing the to and fro of thinking, evoking inner action taking place for the best possible outcome. Simple, original language relies on capitals to start each line to emphasise family issues, or tense moments. I immediately wanted to believe his questioning, it seemed vital to stay alert.

Clever slim poems, or pared back lines in plumper verses anyway reveal highly personal thought processes, suggesting delicate territory which nevertheless deeply matters. A slightly old-fashioned touch at times is believable as the genuine voice of the poet. We each have our own personal history to mine for useful formats and words, especially for exploring vital, delicate, heartfelt, or difficult subjects. Real integrity appears between lines in these poems highlighting a flexible, adaptable person, hinting at a careful cleverness also open to dialogue.

‘Come, join our cause’, could work as a song and indeed this kind of poetry has formed lyrics. Places where much trouble and change has occurred Cairo, Jerusalem after a time, I felt surprised there were not more names, however this poem obviously refers to particular places for various personal reasons. Further research is encouraged by such poems,suggesting further reading to gather more information.

Possibly, after reading Whose broken is this? and other poems a reader could
feel strengthened, surer about defending decent ways of life. These are decently watchful, observations keenly and carefully made. The slim poems, for instance, are worn down to essentials, but still appear strong, a startling and subtle effect, simultaneously. Poetry our most difficult writing art form, can flex and call back and look forward, all at once and more, so well.

Raewyn Alexander, novelist, poet, non-fiction writer and lately working on graphic poetry about her love for fiancé Chris Knox – Nowhere and Nothing (but Love). Hamiltron: City of the Future published her growing-up-in-the-Tron comic, 2015, and she has work in the Three Words comic anthology. Residing in Tamaki Makaurau Auckland, Aotearoa NZ and descended from French, Irish, Scots, and English, she has published seventeen books including the Five star review third novel, Glam Rock Boyfriends, which is available on Amazon. Raewyn can be found at http://poeticjourneytoamerica.blogspot.co.nz/ and more information is available at – www.bookcouncil.org.nz/writers/alexanderraewyn.html

Who’s Broken is This? and Other Poems is available from https://www.ginninderrapress.com.au/store.php?product/page/1824/%2A+John+Passant+%2F+Whose+broken+is+this%3F