‘Human Resources’ is based on an erasure poem of the same name by US poet Dave Bonta. Erasure poetry is the process of creating poems by selecting words from pre-existing texts. The original text here is sections of a CIA document from the 1980s, concerning mind control techniques. Dave’s piece, original excerpts and erasures both, first appeared in The Other Bunny journal online in March 2018. The video is made up substantially of this text on screen, overlaid on a delirious blend of movie images from the Prelinger Archives. I chose to ‘mash up’ two different films for this background. The first, and most visually recognisable, is Duck and Cover, a famous documentary film from the 1950s containing advice on how to take cover in the event of a nuclear blast. The second film is Destination Earth, an anti-communist animation also produced in the 1950s. Both films were ‘doubled up’, making four superimposed layers, sped up considerably, with some parts appearing in forward motion, others in reverse, and some images rotating so that they appear at odd angles throughout the piece. The rapid melee of images is designed to express the hallucinatory effect of mental confusion engendered by mind control. The music is a psychedelic piece by The Night Programme (aka Paul Foster), with whom I’ve collaborated musically for over a decade, all via the net (he’s in Wales, I’m in Australia). The track is entitled ‘Cxx2’, from his album, Backup 010318. In a contemporary sense, the poem and video seem timely in this era of rampant fake news and unabashed propaganda. 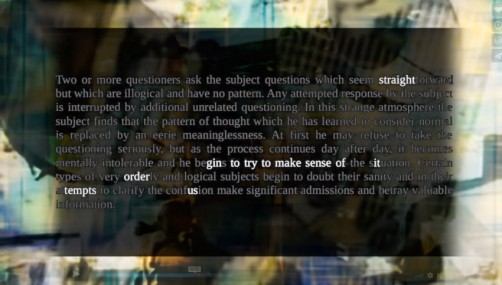 Rochford Street Review is free to browse and read at your pleasure. As an independent journal, which doesn’t receive funding from any government agency or institution, we rely on the generosity of our readers to be able to pay our writers and to meet our ongoing costs.

If you are in a position to do so please consider “paying’ the suggested sale price of Aust$10 for Issue 26. You will contributing to the future of Rochford Street Review and ensuring that our writers get at least a small contribution for their work.