The Bruise of Knowing: a Short History of John Monash by Phyllis Perlstone, Puncher & Wattmann 2019, was launched by Anna Kerdijk Nicholson on 11 May 2019 at Benledi House, Glebe, in Sydney. 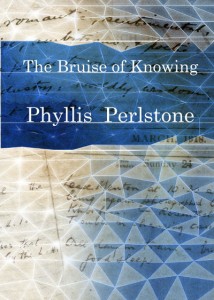 Thank you for coming to celebrate the launch of Phyllis Perlstone’s book, The Bruise of Knowing : Poems: a Short History of John Monash.

As an introduction, I will read to you from a pair of sequenced poems from the book, ‘Two Incidents as Engineer / Not to Plan for them was the Mould of Disaster’ partly because it will let the work speak to you and partly because the more I think about these particular poems, the more I think they will help me to lay out my thoughts for why I think this is an important book.

To measure the bend in it –
skewed over the river
to suit the orders for the bridge –
Monash and Richardson, Bendigo’s city engineer
decide
despite thin streaking across it
it’s safe to continue testing –
a roller and traction engine
are run along to meet together
– 25 tons at the centre –

the bridge twists
concrete bits break off
the water’s splash, the crashing pieces
the slow time of gravity’s next
is like glass
in an accident

the traction engine tips
and falls
on Albert Bolt, 37 years old;
pinned under it
“one arm
and one leg
severed
he’s disembowelled”

Monash tries to speak
to a reporter
near him
his face muddied
shock splits into
his ‘greatest regret’
‘the loss of life’ –
stilted, his mind’s stall
words remove him from the moment –
as if he could speak for the pall
of ends in the air, of being stopped
of waiting

1898
…
Some workmen stand
some sit on logs –
Monash aged 33 leans one leg against a log
the workmen’s limbs are half easy, too
though their jackets and trousers are looser
rumpled round their thinner figures –
their faces

I think this is an important book for a number of reasons. Firstly, because it shows to us, as Australians, a perspective of Australia in history. Secondly, because it treats with the, sadly, continuing and contemporary themes of xenophobia and religious bigotry. And thirdly, because this is a work of mature literary and poetic technique.

AUSTRALIA IN HISTORY
In a month’s time it will be the centenary of the Treaty of Versailles which was signed in June 1919. John Monash was born in 1865 and died in 1931. In his life, he saw the rise of feminism and ‘forward-rushing’ societal change. He saw, first-hand, the transition from the Ottoman, British and German Empires to the modern age. This man championed Monier’s reinforced concrete; the new ballistics and cannons; the use of bi-planes to scout-out the enemy’s position before battle; using armoured vehicles to advance protectively alongside infantry; and he prioritised feeding ‘his men’, and the recovery and treatment of the wounded.

The chronology of this book bites down when colonial Australia is a mere 100 years old in the 1880s. Monash, who lived in Jerilderie and Melbourne, met Ned Kelly and attended Sarah Bernhardt’s and Nelly Melba’s performances. These people are now part of Australia’s white cultural mythology of resistance, expedition and talent. Australia’s new populace was literally constructing itself during these decades and the engineer, Monash, was involved. As at 1914, with the troops embarking for the Great War, Australia went back out into the international arena. As a consequence of direct re-engagement with Europe and the Middle-East, Australians understood themselves, differentiated from the British.

not to be like the British officers, those who
from their classes of command
the hierarchies they followed
where carelessness
not thinking
not sparing the ranks
was forgiven
yet holding fast to equipment
valuable machines
and expending men

still couldn’t stop
the Germans’ hold
on sites, on towns, where infantry
were left everywhere
to bury their dead

XENOPHOBIA & RELIGIOUS BIGOTRY
The early Monash who the book presents has rages, affairs, he ‘wants to control’ his wife, Vic, expects her to ‘respect his authority’, he even abducts their child from her. He is intelligent and talented. He is driven and ambitious —

Monash
… believes in his ambition, the one he is to achieve.

At the opening
of the annual gunnery course

over what was marvellous.
…
… the paper praises
Monash
for his “first-rate style”
the lecture he presented.

He is easy, spontaneous, “note-free”
on improved structure
in cannons.

But after Gallipoli, no longer transported by marvelous cannon, and affected by having witnessed the effect of cannon on human beings, Monash is learning to subjugate his talents:

If it was also a love of reaching
goals, puzzling strategies,
in war it was to be hard
to hold back his own intense
forethought
dropping it as if he could believe in
compliance,
in the arrangements of others
under their command

Monash uses his intellect for planning. He marshals and cares for the men under him; he institutes those strategic warfare innovations using modern machinery instead of flesh and blood. When Monash is ordered to ‘seize the High Ridge … he objects … his men were exhausted’, but he is ordered to go ahead. 2,000 men are killed and there are 7,000 casualties.

Murdoch (a journalist) and Bean (the war historian) ‘take exception to Monash’s exceptional eclectic intellect — “the Jew will always get there”’. How they ‘try to prevent his appointment to be corps commander to Monash is ‘strange’. Dealing with that prejudice while managing all his responsibilities of command, Monash responds: ‘it’s difficult “fighting a pogrom”’.

Here is classic discrimination and racism: the application of generic characteristics to an individual; pre-judgment; skewing in reportage; and sidelining and control by collusion. While it confuses Monash and angers him, he consistently continues to apply his skills to the tasks at hand and succeeds mightily and worthily, regardless.

1892 Monash is Abused and Insulted

Now he’s between desire and what he will do

He twists in the spin
of what goes around him
yet keeps him out
no way to redress not being with those
he’s thought he needed
only his worth, to be among’

I commend Phyllis for her handling of this difficult, continuing and contemporary theme for modern Australia.

LITERARY TECHNIQUE
This book is the product of the mature technique of a poet who has been working solidly for the last three decades. The voice is as bright, the rhythm and syntax as rich and complex but there is an assuredness to the work.

I think part of its success is the intensity of the poet’s gaze at the subject matter which raises the image to symbolic:

Both Vic and Monash
sitting at a piano together
playing duets touch a score
each understands.
The passages hold them tense,
the sounding out of different tones stir words, worlds
heightening, merging
into a space for them together playing
Better than speaking to their strangeness to each other.

We are taken outside fiction or history book and are asked to apply ourselves to the sensory experience of the moment described, as well as seeing it as somehow definitive or representative of the nature of their relationship.

Phyllis has a painterly eye. You may know that she was a maker of experimental films and perspective is every-present as a theme in all her books. She alludes to Nolan, Breughel and Titian. She describes Nolan’s painting ‘The Slip’ in exquisite detail but it is her interpretation of our ‘seeing’ of the painting that we experience Phyllis at her most ‘Phyllis’:

The legs delay your glance
their slenderness
the head holds skywards
a cast of itself
fear-stiffened,

poised,
to draw towards
the curving back

The horse
in its fall
is ahead of that.

Which brings me to the use of time. See how she is already ahead of you, which makes you think back to what you have been looking at, and then you do a review, and realise you have not been looking at anything? That use of ‘foresight of hindsight’ engenders, elsewhere in the book, irony. You already know something (and of course we do, this is after all a history of history) that is being revealed to us. This playing with the chronology is another play of perspective that deepens the philosophical and sometimes the psychological engagement with the themes.

In another time-related technique, Phyllis uses poetic parentheses. She brackets small poems with diagonal slashes. I like to think of these as sections of exegesis as we are taken to where the poet is living her life and thinking about photographs of Monash or facts gleaned from biographies of him. I think this assists the book to avoid disingenuousness: she is signaling to us that we read this subject through the lens of her eyes. She has selected and ‘sampled’ from the recorded life, she has interpreted it, and it is not an historical account.
I find this work fascinating. It engages me intellectually. I’m delighted by the detail, I feel I understand Monash and by the end of the book I have immense compassion for him.

In conclusion, I say, with great respect, that Phyllis handles the scope and depth of this work masterfully. I hope the prize judges agree with me.

Anna Kerdijk Nicholson’s three collections of poetry are The Bundanon Cantos (2003), Possession (2010) and Everyday Epic (2015) and the chapbook, What was Lost (2007). In 2010, Possession won the Victorian Premier’s Prize and the Wesley Michel Wright Prize and in 2011 was shortlisted for the ACT and the NSW Premiers’ Prizes. Born in Yorkshire, she now farms on the NSW Southern Tablelands. ‘Everyday Epic’ is published by Puncher & Wattmann: https://puncherandwattmann.com/books/book/everyday-epic

The Bruise of Knowing is available from  https://puncherandwattmann.com/authors/phyllis-perlstone