Yesterday I found a photograph
taken in nineteen eighty-eight

on the oval after school. You wore
a green tartan skirt, a white blouse,

Your gaze ignores the camera,
focuses on the plains north

of school where we roamed
on winter afternoons until twilight,

watched rabbits bound towards
their burrows and kangaroos

descend upon the creek to drink,
the plains where sheep grazed

upon lush grass while we lay
together in a hollow sheltered

from the westerly, your auburn
hair curtaining our faces, apricot

scent of shampoo in my nostrils,
your tongue in my mouth, hands

inside my woollen jumper,
the plains erased from the map

in ninety-nine when bulldozers
scraped the landscape, destroyed

all vegetation and the new suburb
was erected: cul-de-sacs, boulevards,

concrete footpaths and backyard pools.
In the photograph, your gaze writes

an invisible history only we can read.

III
I read High Windows
on the train to Hull,
contemplate fuck-ups.

IV
A bikini-clad woman
rinses in the open shower
beside the hotel pool
watching males gaze.

V
The woman at the café
in the Slovakian railway
station doesn’t understand
bread, brot, pane or pain –
I depart hungry.

VI
Warning signs on the train
are posted in five languages –
not one my native tongue.

VII
I stand in the bar carriage,
legs wide like a sailor in rough
seas, riding every curve’s
sway, saving precious liquid.

IX
The front desk worker
and a sweaty member
sing along to Men
at Work’s Down Under
in a Texas YMCA.

I touched down at Tullamarine,
embraced my parentless mother
and newly fatherless father,
drove straight to the Watergardens
to buy a black suit and SIM card.

I spent the time between my arrival
and the funeral with my parents
at Macedon, talking over tea,
running in the ranges through crisp
air and autumn leaves, driving through
the landscape of my formative
years to the town of my birth,
reminiscing over dinner and drinks
with relatives, sharing a rented
holiday house with parents and siblings.

On the morning of the funeral
jetlag woke me long before dawn.
I spent hours walking the streets
in darkness, stood on the beach
at sunrise, found myself outside
the hospital where I was born,
where Pa died just days before.

After the mass, the burial
and the wake, the carrying
of the coffin through the drizzle,
the conversations with uncles,
aunts and cousins accompanied
by beer and wine from Pa’s birthplace,
the surprising joy of watching
cousins’ children play, I drove to Melbourne
with my brother, spent four precious hours
conversing, stopped beside Lake Colac
to walk through the botanic gardens
in the rain, parted on the Spencer Street
bridge not knowing when we’d meet again.

Fresh from sprinkling dirt on my grandfather’s
coffin, I spent the remains of the day
wandering Melbourne’s glistening streets
and lanes in my black shoes, black tie and black
suit, wet with rain, immersing myself in home.

The next morning, I briefly returned
to my wife, daughter and life
in the northern hemisphere spring,
spent four days scaling exam mountains,
suffered the daily commute and parking
hunt, battled an inbox full of demands.

The academic year finally
complete, I crossed the Pacific
for the third time in nine days,
bound for an antipodean autumn
and weeks of solitude – time
enough to heal and create.

climb through stands
of pine, birch and spruce

follow the path beside the river
watch chipmunks, rabbits and deer

climb cliffs, jump from rocks
bathe in the river at Dalton Canyon 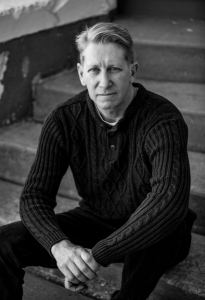 Nathanael O’Reilly was born in 1973 in Warrnambool and grew up in Ballarat, Brisbane and Shepparton; he moved overseas in 1995, has travelled on five continents, and lived in England, Ireland, Germany, Ukraine and the United States. He is the author of Preparations for Departure (UWAP Poetry, 2017), named one of the “2017 Books of the Year” in Australian Book Review; Distance (Picaro Press, 2014; Ginninderra Press, 2015); and the chapbooks Cult (Ginninderra Press, 2016), Suburban Exile (Picaro Press, 2011) and Symptoms of Homesickness (Picaro Press, 2010). O’Reilly received an Emerging Writers Grant from the Literature Board of the Australia Council for the Arts in 2010 and was writer-in-residence at Booranga Writers’ Centre in May 2017. His poems have appeared in journals and anthologies in twelve countries, including Adelaide Literary Magazine, Antipodes, Australian Love Poems, Backstory, Cordite Poetry Review, FourXFour, FourW, Glasgow Review of Books, Headstuff, Marathon Literary Review, Mascara Literary Review, Other Terrain, Postcolonial Text, Skylight 47, Snorkel, Tincture, Transnational Literature, Verity La and The Newcastle Poetry Prize Anthology 2017. He has given invited readings in Australia, Canada, England, Hungary, Ireland and the United States. (Un)Belonging, his latest collection, is available from https://recentworkpress.com/product/unbelonging/