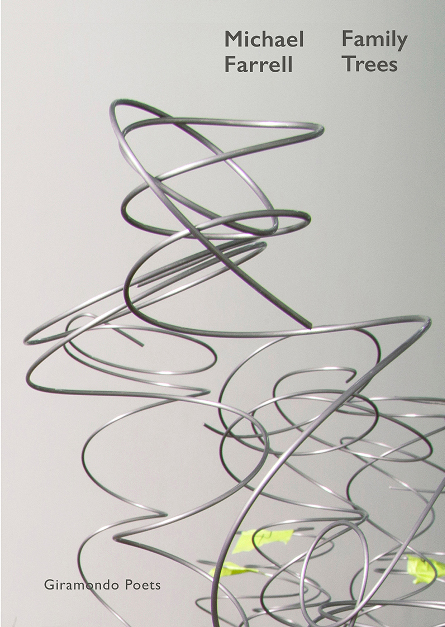 It was with trepidation and some excitement that I approached a reading of Family Trees, the most recent collection of poetry by Australian poet Michael Farrell, regarded as one of our leading contemporary experimental poets. As it happened I had just read “Introduction to Poetry” by Billy Collins with the memorable final lines:

But all they want to do
is tie the poem to a chair with a rope
and torture a confession out of it.
They begin beating it with a hose
to find out what it really means

So I determined to put aside the question “But what does it mean?” and just meander through the workings of Farrell’s mind with his delicious playfulness with words and ideas without hunting for hidden meanings.

Farrell is a master of word play, of irony, literary and pop culture, of illusion and parody and he’s just so damn funny. Farrell has been perfecting this finely wrought craft for more than twenty years now and this is his eighth publication, released by Giramondo Poets. Like his earlier collections some of the familiar suspects reappear – kangaroos, lyrebirds, wombats and even the infamous Pope Pinocchio puts in a return performance.

Farrell says he often writes poems based on titles and many here are like handcrafted pieces of small sculpture. Titles such as “While my Verandah Gently Weeps”, “Jesus Likes Radiohead” and “Liked in Prison” could go anywhere. Some of his verses too stand out like the patter of a stand-up comedian.

Do you have wifi? They
Ask politely, as if they were Japanese
Robots on a first assignment

What is this need to spend thousands of dollars to come to
the other side of the world to disagree with people about
literature?

In poems such as “As if Writing a Poem” individual lines are like haiku:

and in a brilliant parody poem “Adjectival Or the English Canon”, in which he disparages almost the entire English Canon of revered authors, these lines:

Admittedly Farrell is often puzzling and challenging but it helps I think to try to understand the tradition out of which he has been evolving. He says himself in an interview that he started writing aged seven or eight because “I just wanted to get down what was going on in my head.” He explores the often fragmented and seemingly disconnected ways we all appear to operate. He seems to have been influenced by poets like American John Ashbery who died in 2017 and who was considered one of the most influential poets of his time and who won many awards including the Pulitzer Prize. Critics noted how Ashbery’s poetry, part of the New York School of Poets, took shape under the influence of abstract expressionism, a movement in modern American painting stressing nonrepresentational methods of picturing reality and this tradition has influenced Farrell, and in his poem “John Ashbery Impersonator”(not in this collection ) he says:

In November 2019 Farrell also edited Ashbery Mode a collection of Australia’s best contemporary poets writing in the “mode” of Ashbery, “relaxing the strictures of Australian poetry, releasing it from its formal and tonal bonds.” In this mode of Ashbery, Farrell’s work refuses to impose an arbitrary order on the flow of words or to “mirror the stream of perceptions on which human consciousness is composed.” Toby Fitch remarks in a review for Cordite that Farrell “moves without continuity from one image to the next.”

This movement is notable in a poem like the remarkable “Isaac Babel And The East Sumatran Rhino”. Farrell includes seemingly unrelated topics – Isaac Babel, Bruce Pascoe, Judith Wright, Msuji Ibuse and the East Sumatran Rhino not to mention Behrouz Boochani in the mix. Closeup these might seem strange bedfellows but Farrell comments that ‘there’s not a particular point to be made here just thoughts.” Viewed from a distance, this poem, Farrell says, is about “research and discovery and rethinking reality”. It’s also about human rights, loss and “democracy with the feathers falling out”. In this poem Farrell uses a favourite word of Judith Wright – “widdershins”, an old Scottish word meaning to go anti-clockwise or in a direction contrary to the sun’s course, perhaps a fair description of the Farrell preoccupations. In the promotional material for this collection Farrell remarks that “the poems of Family Trees reimagine the ways we look at things.”

Farrell’s style is full of reimaginings. He’s certainly a deconstructionist, wary of imposing artificial structures on his material but sometimes despite that wariness, the poet will still impose his or her own preoccupations on the poetic material. The more you struggle to be structureless perhaps, the more you impose a structure of some sort. Decisions have to be made about what to put in or leave out. Farrell appears resolute to avoid the traditionally romantic or emotional connection but it does sometimes creep into his texts. “Apple Tree” is a poem more in the mode of Browning than Ashbery.

This is
the voice of the apple tree, it sorrows as it loses its
leaves, it triumphs when laden with red or green fruit
An apple tree is no brute

and the beautiful lines:

Its voice has
no sound yet falls pinky white. I want to fall like apple
blossom in the hair of the wrong guy, make a place for his footsteps

Although influenced by Ashbury’s New York School of Poets, Farrell is not necessarily anti-structure. A poem like the title’s “Family Trees” mimics the style of Genesis chapter five, where popular culture “begats” the Old Testament:

While many of his poems are free verse there are echoes of structure as in the pantoum-like “Tempestina” and the melodic repetition of verses in “Fiat in Turin”, “Folktales of the Avant-Garde” and “Sightings”. He also has two examples of concrete poetry in this collection but they seem marooned and out of place here.

There is much to discover in reading Family Trees. One reading is just not sufficient and there are always surprises. As Toby Fitch comments: “Michael Farrell is always looking for ninety degree turns, even one hundred and eighty degree turns and at every possible juncture detonating the ability to understand.” I think we’ll take that as a comment.

Interview with Michael Farrell in: https://messybooker.wordpress.com/2016/11/07/cockys-joy-michael-farrell-plus-bonus-interview/

John Bartlett is the author of three novels, a collection of short stories and non-fiction. His poetry has been published in a number of Australian and overseas journals. In June 2019 Melbourne Poets Union released his Chapbook The Arms of Men as and in May 2020 Ginninderra Press published Songs of the Godforsaken as part of its Picaro Poets’ series and will publish his full collection Awake at 3am later in 2020. He was recently the winner of the 2020 Ada Cambridge Poetry Prize.

Family Trees is available from https://giramondopublishing.com/product/family-trees/

The End of the Line
by Rae Desmond Jones

The End of the Line is Rae Desmond Jones’ final collection of poetry. Rae worked on this manuscript during the last year of his life and it’s publication is a fitting tribute to a great poet.

“Rae Jones was one of the great characters of the Inner West. His commitment to safeguarding the built environment led him from being an activist to becoming Mayor of Ashfield Council. Rae’s poetry reflects the eclectic and progressive nature of the community where he lived, as well as his passion for politics. It canvasses a range of topics including family, friendships, history and the state of the world”.   – Anthony Albanese

“The End of the Line is an animated collection, bristling with the varied perspectives, moods, and colours of Jones’ consciousness and ‘voice’. Jones was an impressive raconteur and his distinctive physical voice echoes through the pages. The poems shift easily from the social/political agora to the deeply personal, to contemplative, spiritual/cosmic dimensions. He investigates individual and terrestrial mortalities, and concepts of being. He can be playful, cheeky, bawdy, satiric, savage and biting – as well as reflective, passionate, lyrical and grave. Shadowy images inhabit the book’s atmosphere at times, but in the final poems there is a sense of achievement – of abundance and joy: ‘Harvest the glow’. This is a vivid book. In ‘To prepare a course of poetry’ Rae advises – ‘ Porridge should be avoided’.”    – Joanne Burns

“Like most poets of worth there is an identifiable template to a Rae Jones production, but within its quite necessary bounds, what a variety! And in this book, with much of it concerned with his and our mortality, this variety continues. Heart-on-sleeve when required, sardonic when required, often in the same work, these poems are distilled Jones, from a man with a life and career more multifarious than most of us. Though the physical Rae is gone, in Sydney’s Inner West and in Australian poetry, his legend still grows.     – Alan Wearne

Many of Jones’s poems finish with the natural world as aloof, seemingly unaffected by the odd juxtapositions in human life – …… But mostly nature serves as pool of comparison, as site of possible transcendence, with what Jones wishes to see, gracefully, as the insignificance of big-noting humanity: this is the descant strand hovering over his fervent engagement in this gritty world – viewed partly in ministerial solidarity, partly in a parody of disdain, and partly in raging shit-stirring protest.   – Gig Ryan,