RETURN TO CAERYDD
After Dannie Abse

staccato conversation on
our walk to preschool 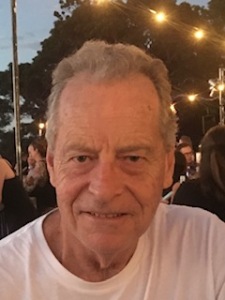 Michael Witts was born in Wales and now lives in Sydney. He has been publishing poetry since the early 1970s. He was a founding editor of DODO magazine and the Fling poetry series. His three volumes of poetry are Sirens, South and Dumb Music. His poetry can be accessed through michaelwitts.com