Show Me Where It Hurts: Living with Invisible Illness by  Kylie Maslen. Text Publishing 2020. 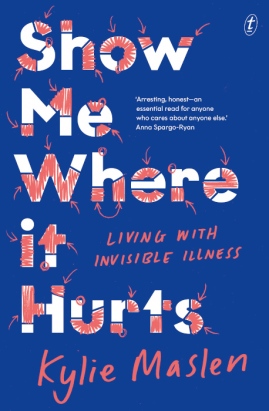 Statistically, half of your friends live with some kind of chronic condition, so when we look to art and pop-culture, why aren’t anomalous bodies depicted in their everydayness? Why aren’t there more common sense discussions about the ableist society in which we live? Show Me Where It Hurts: Living with Invisible Illness is a tactile reaction to these questions.

Debut author Kylie Maslen lives with endometriosis and bipolar 2, two fairly common chronic illnesses that are somehow expected to be hidden away and dealt with in private, as if they’re too peculiar for other’s to comprehend, as if they’re so frightening they risk causing unnecessary discomfort. Maslen refuses to play nicely. In putting out a book such as this, the author must deal in a currency based on vulnerability, but Maslen’s voice is always authoritative. She’s confident in her views, in her values and in her body. She seems as comfortable referencing Spongebob Squarepants memes when talking about ways she’s learned to live with pain, as she is discussing the fetishization of Frido Kahlo and the danger of not viewing art as both personal and political when the artist is one with a disability.

Though there is one main thread in this book, that of living with invisible, chronic illness, each essay is structured around a unique and exciting thread in itself, and so Maslen pairs The Golden Girls and Netflix’s Grace and Frankie with social policy on housing and retirement: ‘I never gave more than a glancing thought as to how I would live in my old age until I found myself a single disabled woman in her mid-thirties’; she pairs Beyonce with an indictment on the depersonalisation of the medical system, where words like, ‘just have kids’ are flippant responses that in fact carry masses of complexities, and none of them interchangeable between patients. But to imply this book is flashy due to the many pop-cultural references, is to undermine the hard work Maslen’s done in opening her life to us. A chapter on self-medication and addiction, for instance, proves vital in her holistic approach to illness narrative, when she presents us with an account of her ongoing struggle: ‘If doctors can’t or won’t act on my pain, what chance do I have of gaining any control over my body, over my illness?’ Similarly, she discusses a natural lean towards sex and sensuality, not shying away from the intricacies of how chronic illness affects this aspect of her identity. In one of the stronger sentiments of the book, highlighting the commonality of able and dis-abled bodies alike, she writes,

What I want now isn’t sympathy – I want to be devoured. I want this body to be pleasurable. The hormones that flooded my body in my teenage years and brought on the first episodes of my illness also brought me my large, soft breasts. The years of medications that led to weight fluctuations have only added to my hourglass silhouette. My abdomen, with its surgical scars and bloated belly, is the site of my biggest body-image issues but also a gateway to be explored with hands and mouths. Those long, lingering touches by the right person become not reasons to tense in fear of what they will see, but openings to a sense of longing and excitement as to what they might do next.’

It would be shocking if it wasn’t so pure, probably why I found myself repeating yes! yes! yes!

In an article in The Adelaide Review, Maslen discusses the origins of her book, telling readers, “I wanted to write the book knowing how much I would have benefited from having something similar available to me however many years ago.” When I was being diagnosed with my own invisible, chronic illness, I’d craved narratives that would speak to me, teach me, empathise with me, though very little were to be found. This is changing. The cannon is growing with writers like the late Gillian Mears, Fiona Wright, Andy Jackson and Katerina Bryant. “I also had a desire to help the people around me,” Maslen continues, “and, in turn, the people around other people with invisible illness understand.” Having lived with my illness for twenty-one years, I also crave narratives that speak to others, teach them and inspire empathy so that there might be real movement toward larger communities of caring. Maslen’s book is the one I am always craving; the author has done exactly what she set out to do.

Show Me Where it Hurts is an important book simply for existing, for giving voice to those previously voiceless in literature, and for critiquing our ableist society in the hope that even one reader might understand more clearly, and then another, and then another, until there’s change, and it does these things exceptionally well. Finally we’re through with ‘inspiration porn’ (a term coined by Australian disability activist Stella Young, whom Maslen refers to time and again) and we can look towards books like this for honest, ferocious examinations that normalise rather than pedestalise, advocate rather than purport victory. I have no doubt this book will put Maslen in high demand and we’ll be seeing her name more and more.

– Heather Taylor-Johnson,
.. editor of Shaping the Fractured Self:
…Poetry of Chronic Illness and Pain

Heather Taylor-Johnson is an American Australian writer living in Adelaide. Her fifth book of poetry, Alternative Hollywood Ending, will be published by Wakefield Press in 2021, and a hybrid verse novel, Rhymes with Hyenas, will be out with Recent Work Press, also in 2021. She is the editor of Shaping the Fractured Self: Poetry of Chronic Illness and Pain, and her second novel, Jean Harley was Here, shortlisted for the Readings Prize for New Fiction and reviewed in the New York Times, has been optioned for a TV series. In 2018 she was Writer in Residence at the J M Coetzee Centre for Creative Practice at the University of Adelaide, where she is now an Adjunct Research Fellow

Show Me Where It Hurts: Living with Invisible Illness is available from https://www.textpublishing.com.au/books/show-me-where-it-hurts-living-with-invisible-illness