I first met Laura in 2003, when we were two of the three poets selected for that year’s Poets on Wheels tour. It was a whirlwind tour of New South Wales’s central west doing readings and workshops, twelve events in seven days, as I recall. It was fun, it was exhausting, it was intense. Since then I’ve had the pleasure of seeing Laura read at other events, and I’m delighted to be here today to launch this, her fourth book.

I’m going to start by reading the endorsement I wrote for the back of this book, which I think captures some of its outstanding qualities:

Afterglow is at once a reckoning with loss and a celebration of what has been lost and the richness that remains. It honours a love story with two endings, the second one final. In this collection you will find raw grief transmuted into startling poems. Intertwined with death and its seismic aftermath are sensual pleasures recalled, humour alongside sorrow and anger, and a poignant portrait of one much-loved.

Afterglow begins ‘ours is a fractured romance’ and this turns out to be true in some unexpected ways. First of all, the book contains a love story in two acts. As Laura writes in the poem ‘In Praise of Foibles’:

And when I asked for a divorce,
he said he understood, he’d divorce
himself if he could.

Five years, we travelled separate
shores untangling what was his,
what was hers,
until we were clear,
our divorce had been a failure.

The collection examines a life lived in intense relationship with a beloved who has bipolar disorder. This experience is conveyed in poems such as ‘Nocturne in Blue’:

I mortgaged half my life for this,
willing to ride the chaos of your moods
just to steep in those rare pools of resonance.

And in the poem ‘Winter Doldrums’:

One night, the poles shifted.
After months of perfect coupling,
the orbit wobbled.
His eyes, those hazel craters
of invitation, froze over.

And in ‘Blue Mania’:

He is possessed again
by the turbulent stranger.

This portrait of a sometimes challenging intimate connection also includes sensual and sexual pleasures. From ‘Prelude to an Afternoon Nap’:

In the lush forest of your gaze
like when we met, I catch
a rare glimpse of something wild
that startles and flies off.

And from the poem ‘First night’:

He ran his calloused thumb
across her lips and she suckled it,
his knuckle salty, then a little sweet.

These details, the acuteness of attention, serve to draw the reader in.

This collection doesn’t shy away from difficult events and feelings, which are rendered with succinctness, emotional honesty and sharp imagery. When her husband dies, Laura writes, in ‘Splinter’:

You can’t fix it—
the tsunami in your heart after his death,
the flux and stillness in its wake.

In ‘First Anniversary’ – the anniversary of her partner’s death – she writes:

In the night, the moans that startle me
are my own.

And in ‘Our Covenant’:

As with a phantom limb, my body
still throbs for yours.

Despite the poet’s wrenching grief, there is no idolisation here. Instead, there is an appreciation of the man as fully human, for example, ‘In Praise of Foibles’, which begins:

He wore his imperfections lightly,
announced them to strangers in the park.
He was his own blooper reel, a bank
of dispensations when the rest of us
screwed up.

There’s also anger, as in ‘No Goodbye for Ducks’:

Crouched on the beach, I sculpt
a sand husband
and with my fists, pound him
into the shore.

And the raw honesty of ‘Untethered’, which begins:

Although the relationship and its vicissitudes is the central thread of this book, it also examines other matters, such as the poet’s own relation to life. In ‘Wild Ponies’, Laura writes:

When my son ran off to follow
The Grateful Dead,
I could think of no cure
except to take more risks myself.

As I hope these excerpts have shown, this collection encompasses tenderness, anguish and finally – maybe intermittently – peace. The complexities of love, intimacy and grief are difficult to write about well, and here it is done in language which is fresh, engaging and apt.

I hereby declare Afterglow to be officially launched, and recommend that everyone get themselves a copy of this intrepid, surprising and moving book. 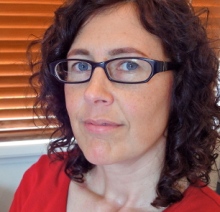 Tricia Dearborn is an award-winning poet whose work has been widely published in Australian literary journals, as well as in the UK, the US, the Philippines, Ireland, New Zealand and Macau. Autobiochemistry, her third collection of poetry, was recently released by UWA Publishing.

Rochford Street Review is free to browse and read at your pleasure. As an independent journal, which doesn’t receive funding from any government agency or institution, we rely on the generosity of our readers to be able to pay our writers and to meet our ongoing costs. If you are in a position to do so please consider “paying’ the suggested sale price of Aust$10 for Issue 30. You will contributing to the future of Rochford Street Review and ensuring that our writers get at least a small contribution for their work.