.From the passion promised by its red cover and declarative title, this debut collection speaks directly from the poet’s heart to that of the reader. The opening poem ‘Before the Party’ presages O’Hagan’s attention to the smallest details and impressions that pulse throughout a life. The poem’s opening lines conjured a film-noir black and white mise en scene of (I imagined) two lovers gazing out through a windscreen, in intimate silence:
.

It must have just stopped raining
When we arrived. The road, licked for hours
By the quiet slap of countless passing tyres,
Gleamed blackly under the street lamps
Like wet liquorice. We sat for a moment
Watching the mist descend
Cobwebbing the edges of trees and hedges,
The silver turning of a leaf in the damp air,
And the tenting of a leaf in the telegraph wires
Carrying beads of water like fairly lights
Backlit by the moon.

Feeling is celebrated but distilled. The language is restrained and measured as, for example, the poet’s contemplative reverence for ritual, routine and the past in the second poem ‘What Was’:

And drink of another old high-ceilinged kitchen
Zig-zagged by light cutting in through the shutters in the run
Half-closed against the sun from the run-around balcony
With its fluttering of uneven ghosts on the line
Which spoke of countless bendings and stretchings
As our mothers down the generations casually
Pegged our lives out there on the washing line,
All this is inherent in that single sip.

Once more the contrast of light and dark provides a striking visual image. Once more, there is an emotional poignancy in an apparently unremarkable moment in the present tense, as well as a gentle tribute to the lives of women who for generations worked in homes performing the repetitive tasks of domesticity for others.

The poem ‘The Lady on the Steps’ introduces the locus of O’Hagan’s childhood in Rome whilst describing the disturbed woman who a child ‘could not un-see’ to yield imagery as cinematic as a Vittorio De Sica film.

Because she’d be sitting there
In her chair outside the palazzo
At the top of a flight of ashen step
Bolt upright, hands joined in silent supplication
Formally clad, hair pinned and piled high
Haughty, not an ounce of self-pity on her
And her head just kept turning
And turning, back and forth
Forth and back
Back and
Forth.

Here, the rhythm winds down to a slowness, a repetition, which evokes the emotional paralysis of the lady, as if the pendulum on her internal clock was losing momentum to remain forever stuck in some unknown trauma. Perhaps because of all the current debate about gender equality and sexual assault in Australia it was especially chilling to read the fatherly explanation ‘Things happen’. By contrast the impact on the young child and the poet was profound:

And in that moment
My childish world quivered and tilted
Its ballast of certainty loosened
And it veered off-course slightly,
Brushed by cool, adult intimations.

The experience of being a child is the topic of two poems ‘Pine Nuts at Lunchtime’ and ‘The Flick of a Lizard’s Tail’. The visceral nature of memory in the former piece begins innocently:

Watching teachers hand slowly scrape
That white stub of chalk across the blackboard
And wincing as it chanced to squeak.

as does the impression made by a reptile near a pot plant which is, notionally, the subject although one feels that there may be something more to tell:

Or the dark bruise of foliage
At the end of the playground
Into which we’d dash
At the ringing of the bell
To play the games all children play
And hide our own confusions.

Violence is implied by the description of the foliage, but to what level is unclear. Perhaps it is merely the artifice of conformity that the children in this Roman Catholic culture imbibed during a conservative time when the sight of Swiss nuns wearing lipstick would cause her father to exclaim:

‘Did you see that?’ as his pace slowed
‘They are wearing lipstick!’
The disbelief, the quiet horror in his voice
Stayed with me long after

This contrasts with the depiction of life in Rome in the late 1970s when political kidnappings, such as that of Aldo Moro, were not uncommon. That kidnap is the subject of ‘Fifty-five days’ which provides the point-of-view of children.

We shrugged at bomb scares at school
Locked our doors, watched our bags and our steps
And skirted any lone bag on a bench.

So when a famous politician was kidnapped
And held hostage for fifty-five days,
We’d run out of shock, so to speak.
Yet his heavy-lidded resignation dragged at our hearts
As a mugshot released grainy proof that he was, still, alive
And his letters of appeal went public.
‘In truth,’ he wrote, ‘I feel a little abandoned …’

Family visits between Christmas and New Year provided respite to the brutal realities of the ancient city in ‘For my Cousin in Faenza’ and there is a profound peace to be found:

You could not hurry winter in Faenza
Time was slowed to a point of utter stillness
And transposed to this foggy, alternative reality
We could at last, breathe free.

O’Hagan’s enduring passion for her home ‘town’ and Italy’s complexity, familial significance, and beauty is the connective tissue for the first half of this book and it is no more evident than in ‘A stain the shape of Italy’. Despite and possibly because of the many journeys she and others her family has made, “It’s irresistible”. In her book she cumulatively discusses the choices she or others have made, captures moods and behaviours with an intense and elegant analysis, and usually a searing insight into the stories we tell ourselves, what our memories conjure, and what lies beneath the force of forgetting. The motif of journeying is always lurking, the point-of-view of the traveller is explored in ‘Destination nowhere’ and identity is linked to that questioning of the self’s relationship to place, or places, as in ‘I left Suitcases’, and the sense of loss of elements of self in ‘Lost in Transition’.

The second half of the book moves into the terrain of adulthood, telling some of the story of the poet becoming a mother and facing a terrifying ordeal in the deeply affecting in her poem ‘Vermeer in Boston’. Here, O’Hagan is not merely writing an Ekphrastic poem about the painting  A Lady Writing. She recounts the awful irony of accidentally seeing this lifelong favourite masterwork whilst waiting anxiously for her son to come through an eleven-hour, life and death surgery. The sequence of poems ‘Boston Uncommon’, ‘Charlie’ and ‘Acquiescence’, are written with frank observations, low key descriptions, and always resounding compassion for the challenges facing both strangers and her loved ones.

Imagination is a remedy for loneliness, pain and loss for O’Hagan. Imagination and words are the fulcrum of her life. In ‘The Beating Heart’ she describes the world of words that comprised her home which she has carried within her, whichever continent she is on:

Even now, decades later, it seems
Direct experience is not enough:
I was ever wrapped in words, and
Rapt in the worlds they made,
Still feel the tug to describe, distill,
And dare, with pen and paper,
To move the boundaries of what’s real
And write a world into existence,
People it with those who may have lived
Or did or could or should have
And give voice to the maybe-souls
Who inhabit the fringes of our subconscious.

In pursuit of this reimagining of lives, O’Hagan’s imagery is at times tightly focused, oblique, and at others, as I have indicated above, it takes the long view of distant memory — as if framed cinematically by a director of photography. In either instance sometimes one feels but there may well be another story which could be told if the poet wanted to, or perhaps she is not ready to make that reveal. At least not yet.

At times life has left ‘No room for tears’ for O’Hagan or her loved ones, but poetry becomes the means to balance resilience with compassion, the raw emotional pull with the professional editor’s desire to shape, cull and distill. The resilience may be something inherited from the great-great-grandfather whose story ‘Blessed to Be Here’ rings so true of so many of us with forebears of the Irish diaspora, but it is also, often, the handmaid of intergenerational trauma, a theme explored in ‘Recalling Sarah’ which tells the tragic story her grandmother who died at 32 leaving a young son.

I think
He never stopped missing you
and the missingness
Was passed down, and down.

And so your photo
Still sits in front of me
A haunting, present absence.

Such loss is certainly a familiar thread for the descendants of diaspora emigres raised to be stoic, get on with it, and make the best of the opportunities of supposedly ‘new’ lands, and shed or forget the privations of home. This is a theme also for  ‘The quiet assimilators’ such as O’Hagan, who have chosen to call Australia home.

There is a spiritual power, in this reviewer’s view, of this ancient land on which all of us, apart from the First Australians whose lineage stretch back thousands of generations and more than 60,000 years, are relative newcomers. For O’Hagan the spectacular native Australian tree, Ficus macrophylla is a metaphor for what Australia can be. For me the poem is an apt counterpoint to the schoolgirls’ search for pine nuts fallen from Rome’s iconic pine trees — the locus where this book’s tale began.

To close, I just wish to say it has been a privilege to spend time taking the journey of reading and then writing about this dazzling and wise debut collection. O’Hagan’s poetic voice is a complex, subtle, and authentic one that I am pleased to hear after her working as an editor for years, helping others craft their writing.

This optimistic poem is a favourite of mine so I leave you with it in its entirety:

A gigantic sprawling metaphor
Blotting out the pale blue sky
Stretching upwards and out
Through the olive green drapery
Across a rustling of generations
Towards sun and sea
To the here and now.

The flesh of its trunk
Swollen with years
Sprouts drooping roots
Great locks of knotted greying hair
Moving heavily with the breeze
And mottled, length, hefty arms
A tangle of whorls and curves and elbows
Rounded and hollowed with time and rain,
Hold up a vast weight, and our dreams.

And so this Ficus macrophylla
Matronly and majestic in equal measure
Rises above its solemn Latin label
(Attached long ago by earnest botanists)
Doesn’t give a fig for it or any other word
As it speaks another language
That of century-old fortitude
Stillness, and succour. 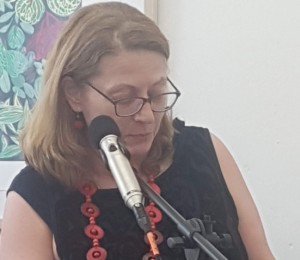 Linda Adair is a poet, writer and artist, publisher of Rochford Press and co-editor of Rochford Street Review. She holds an honours degree in English from the University of Sydney, a Masters Degree in Sustainable Development from Macquarie University and a landscape Diploma  from Ryde TAFE. She was an editor and writer at Sydney’s Powerhouse Museum from 1987 to 1999.  Her collection of poetry,  The Unintended Consequences of the Shattering, was published by MPU Inc in 2020.

The Beating Heart is available from https://rochford-pressbookshop.square.site/product/the-beating-heart-by-denise-o-hagan/76?cp=true&sa=true&sbp=false&q=false