I first came upon Atsuro Riley’s poetry eleven years ago while trying find an online audio forum for cataloguing some of my own work. For me, the concept of poetic “Voice” is very important. Not only its distinctiveness which can be discerned from words on the page but its aural qualities. I found a suitable website and simultaneously discovered Atsuro. He had recorded himself reading poems from his first book, Romey’s Order (University of Chicago Press, 2010). I clicked onto one of the mp3s and was immediately absorbed. Read the following poem from his first book aloud and listen to how it sounds:

Come the marrow-hours when he couldn’t sleep,
the boy river-brinked and chorded.

Mud-bedded himself here in the root-mesh; bided.
Sieved our alluvial sounds—

a rabbity heart-hammering amongst the canes;

sleeping Mama grinding (something) with her jaw;

putting her tea kettle! wren-calls on for the crying
……..marsh-wren orphans;

R.T. tale-telling down by Norton’s Store
..……“Where every Story cauls a Grief”;

Now imagine reading it with a South Carolinian accent. South Carolina is where Riley was born and raised. I recommend you listen to Riley reciting his poetry online. The soft, highly considered musical cadences of his recitation are part southern gothic and part lullaby. The atmosphere created is that of a steamy nature documentary set in the humid and swampy lowlands where rice, cotton and tobacco were the traditional crops and seafood is plentiful and prized. “Mud-bedded himself here in the root-mesh” and “Perseverating fiddler-crabs pockworking the pluff-mud” are just two examples of his visceral imagery and almost obsessive alliteration.

When observing Riley’s poems in print you notice all the white space, the roominess. And in contrast the persistent compounding of words, many idiomatic, some not, but all creating a powerful concentration of meaning. The tension between the airiness and the almost claustrophobic density of nouns constantly converted into verbs becomes very distinctive. But this is not derived from emersion in academia. It comes from reading widely and deeply. As Riley stated in a recent online interview, “I’m the autodidact of autodidacts…I’m very much self-taught. I’ve never been in the MFA industrial complex.”¹

The phrase MFA industrial complex is telling. While Riley has received many prizes but it appears he views writing more as a vocation than a career.

It feels important to have briefly discussed this poem from Riley’s first book to set the stage for his second and current one published 11 years later. What he lacks in abundance he makes up for in richness and seriousness of purpose.

The tile of his new book Heard-Hoard, derived from the phrase “word-hoard” which appears in the poem ‘North’ in a book of the same name by Seamus Heaney (North, Faber and Faber, 1975) is perfectly coined. It positions Riley as a recorder and hoarder of words but also of stories, place and sounds. Referring to the writing of poetry he states, “It’s a simple act of making. It’s the digging of a well or the throwing of a poet or the planting of the tomatoes for the season.” (ibid.) One can see from this why Seamus Heaney and Gerard Manly Hopkins as well as Les Murray, as it happens, have provided him with so much inspiration. Heaney’s veneration of the natural world and Hopkins’ and Murray’s glorification of the natural world as a sign of God’s presence both inform Riley’s work.

As in Romey’s Order, many of the poems in Heard Hoard have one-word titles which are nouns such as ‘Moth’, ‘Stranger’, ‘Oak’, ‘Ladder’ and ‘Thicket’. Riley’s poetry has a “thingness” that that’s involves all the senses. If you relax into the poems and let their fecund, compounded and truncated language wash over you they dazzle. If you enter them with a compass, you can get lost. Take this poem for example:

I been ‘Candy’ since I came here young.

My born name keeps but I don’t say.

To her who my mama was I was
pure millstone, cumbrance. … Child ain’t but a towsack full of bane.

Well I lit out right quick.

Hitched, and so forth. Legged it.
Was rid.

They let me bide and listen.

This gristly man he came he buttered me
then took me off (swore I was surely something) let me ride in back.

No I’d never sound what brunts he called me what he done
had I a hundred mouths.

How his mouth. …Repeats
on me down the years. …Everlastingly
riveled-looking, like rotfruit.… Wasn’t it
runched up like a grub.

First chance I inched off (back through bindweed) I was gone.

Nothing wrong with gone as a place
for living. …Whereby a spore eats air when she has to;
where I’ve fairly much clung for peace.

Came the day I came here young
I mothed
my self. …I cleaved apart.

A soul can hide like moth on bark.
My born name keeps but I don’t say.

Where does one start? There is so much to admire in Riley’s use of language.

To her who my mama was I was
pure millstone, cumbrance…

Nothing wrong with gone as a place for living

Could there be more devastatingly precise ways to describe an unwanted, mistreated girl’s experience. And from the girl’s own mouth.

As with all depictions of trauma , isn’t it the grace, beauty and originality of that description that helps to make the trauma bearable? Isn’t the attempt, however vain, to transmogrify adversity into art?

Reading Atsuro Riley’s poetry is not only a pleasure, albeit a difficult and challenging one at times, it is an instruction manual. Heard-Hoard is a must read, not only for poets, but for all writers who take writing seriously. Who treat it as a vocation. 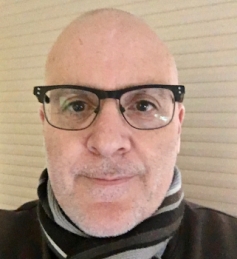 Mark Mahemoff is an Australian poet, critic and psychotherapist. He has published four books of poetry and his work is represented internationally in a variety of journals and anthologies. His most recent book is Urban Gleanings (Ginniderra Press, 2017). His next book, Trojan Gift, will be published by Puncher & Wattmann in May.