Off limits by Louise Wakeling, Puncher and Wattmann 2022, was virtually launched on 22 January 2022 by Peter Kirkpatrick.

To go off limits means to move beyond what is mandated to be a safe or secure boundary, with the implication of trespass and danger, both physical and moral. Forgive us our trespasses as we forgive them that trespass against us. Like its synonym, beyond the pale, to go off limits is to go outside of what is sanctioned and acceptable. Which isn’t the same as off piste, which simply means to swerve outside a designated run, where the activity – skiing, in the literal sense – remains the same. For truly going off limits may require a range of unusual skill sets and an ability to adapt to circumstances. It may require you to carry a burglar’s tools, or to wear a disguise of some kind – a uniform, a fright wig, a fake nose – or to turn up wearing no clothes at all. Going off limits should probably come with a trigger warning.

Louise Wakeling’s latest collection begins with what might seem the familiar outlines of a city we all know and love, but she immediately starts tracking unusual pathways across it, taking on other, unfamiliar identities in order to do so. The opening section, “Urbanites”, is both fascinated and appalled by the often toxic ecologies of modern Sydney. From the first poem, which describes the ferry journey from Cronulla to Bundeena across Port Hacking, the poet acknowledges the Indigenous history of the place, against which

Sydney itself, the work of a mere two centuries, thus remains highly “questionable” throughout this section, where “seahorses cling to trolleys at the bottom of the Harbour”, anglers catch dioxin-affected fish from its waters, and “Garden Nazis” seek to obliterate the edible native weed purslane from their tidy yards. Purslane is a neat symbol of the city as it appears in these poems, both in its wild irrepressibility and in the ways Sydney’s dark roots keep re-emerging under the blonde makeover. Meanwhile, in suburban Ermington, where

“a grey doona rots on a balcony, year in, year out”, and “strangled Santas dangle from gutters like failed housebreakers”. Among the most striking of these Sydney poems is ‘Archaeological dig’, which describes the resurrection of the early colonial graveyard now concealed by the “wedding-cake” Town Hall in George Street, and leads into the imaginative recovery of a primal Aboriginal presence in the form of

What these poems do is to trace a psychogeography of Sydney; which is to say, they follow their own very personal itineraries within and between the fabric of the city, finding queer points of connection here and there along the route. The term “psychogeography” comes from the French Situationists of the 1950s and 60s, late modernist revolutionaries who sought to inscribe radical new meanings upon the urban environment bequeathed by capitalism through a form of creative wandering. In the Situationists’ unstructured journey or drift (dérive) you determine to walk along odd or out-of-the way paths, following the map of your desires, thereby translating the city into a rebellious dreamscape that subverts the spectacle of consumerism that enslaves and alienates its inhabitants. That’s the theory, at least. The Situationists would have regarded your car’s GPS navigation system as totalitarian. Their famous catchcry during the Paris uprising of 1968 was Sous les pavés, le plage: Beneath the pavement, the beach. And that’s what the title poem of Off Limits in effect describes: a life of urban drifting around Sydney via its subterranean arteries, where what Louise calls “those headless aficionados of overflows/and undertows… surge like stormwater/through pipes, abseil down slippery slopes,/wriggle through eighteen-inch drains”. Sous les pavés, l’égout: Beneath the pavement, the sewer.

they never know who they’re going to meet
down there – IT boys and office workers,
students slaving for degrees in Recreational
Trespass, Cave Clanners and girl graffiti-
artists on fold-up scooters bent on going
where they’re not supposed to:
theirs is a kind of moratorium
on compliance: in the absence
of Vietnams and tsunamis, they satisfy
an urge for diving into the wreckage,
sewer-surfing the past, thumbing their noses
at all those “thou shalt nots” a city’s
predicated on, the obverse of our “clean
and green,” dedicated drain spotters
seeking poetry in other people’s motions

I’m also pleased to see that Louise has taken time to praise that much maligned and now much neglected landmark, the former White Bay Power Station, whose image is reproduced in all its rusting magnificence on the cover. A vast cathedral of old-fashioned industrial technology built in what Prof. Wikipedia tells me is “Federation Anglo-Dutch” style, its finer points have eluded me up till now. Louise, however, uses it to frame an elegy for a blogger and fellow psychogeographer called Pred, from Predator, who often trespassed there because he was in love with the place, “a drain baby keen on coal-fired/sex in edgy places”. Also memorialised is the White Bay Hotel which used to squat, isolated and toad-like, next to the Power Station and catered predominantly to its workers. When some local pubs introduced so-called topless barmaids forty years ago, I vividly recall a sign outside the White Bay advertising “bottomless barmen”.

Other sections of Off Limits range from love gone wrong in Arizona, Hawaii and New Mexico (“Long-distance affair”) to the differently complicated pleasures of the natural world (“Earthed”). They traverse the celestial to the terrestrial, from the Curiosity probe on Mars to the humble tomato, whose species name lycopersicum, as Louise reminds us, translates as “wolf peach”. The tomato poem was in fact inspired by a 1939 painting by Australian artist Nora Heysen of what we’d now call “heritage” tomatoes on a blue Chinese plate, and is part of a sequence called “Getting the picture” made up of poems about artworks. Ekphrastic poems they’re called, and they’re a real feature of this collection. Ekphrasis allows the poet to step somewhat away from both the lyric “I” – and “eye” – into a world mediated by another way of seeing, in which the writer acts as host for the painter by instituting a dialogue with their work. Painting as the guest of poetry.

My favourite among this set is “At the Mosman Art Gallery”, which appears to transcribe the dialogue between an art collector and his female “friend with benefits” about a painting by contemporary artist Lucy Culliton which features a dog looking rather forlornly from the artist’s bathroom. (You can find the picture in question easily enough online: “Lucy’s Bathroom”.) The dog here is conspicuously “off limits”, in the sense of being out of its normal place. The point is that the presence of the white dog subtly shifts the way we read this blue and yellow bathroom, making it quietly dramatic in both visual and emotional terms. And there’s a further tension: has the mutt already been bathed, or is it awaiting immersion? What’s happening here? The woman’s voice in the poem celebrates this very “mundaneness” of the image:

“I see fight-or-flight”, she says, “still-life itching
to escape the label: ‘Nude in Bathtub (wet or dry)’ –
she wants to paint her bathroom with someone in it.”
salience. a purpose.

The dog may be fixed in place because captured in paint, but its downcast desire to take off and be anywhere else is palpable.

“At the Mosman Art Gallery” ultimately hinges on this quivering tension between stasis and movement, “still-life itching/to escape the label”, one that I feel underpins many of the poems. It’s there in the tension between present and past in the Sydney poems, in which historical images erupt into the here and now in a stereoscopic way, appearing to overlay the contemporary. (I’m reminded here of Walter Benjamin’s elusive notion of the “dialectical image”.) As an object in space a painting can pretend to still time, but a poem is made up of words which necessarily circulate in time and are thus more immediately subject to change and transformation. As Louise writes elsewhere (“Bird in search of a cage”), “the world is woven through with meanings/you never get to choose”. Another of the ekphrastic poems takes in the now unrecognisable view across Darling Harbour nearly forty years ago. Jeff Rigby’s painting Looking West from the Roof, 204 Clarence Street, 1986 shows a dominantly grey industrial landscape that includes extensive railway yards and the now demolished Pyrmont Power Station. If the picture celebrates that older heavy-duty modernity, Louise’s poem is almost an elegy for its lost technological optimism; a broken promise also embodied in White Bay’s gargantuan ruins:

for me the city flows two ways, still,
alternating past and future – the bones
of offices long gone imprint their auras,
windows archive the shapes of buildings,
a ghost tour of rooftops and bridges
sliding into the slipstream of a winter’s day

One final point. Across the spaces that Off Limits takes us, you might also say that there is a subtle shift from the visual to the aural, from seeing to hearing. The final section, “Earthed”, contains one of this collection’s most beautiful, indeed most grounded, poems, “Hearing the world”. In it, the poet comes home at last to the Blue Mountains, and to the silence and estrangement that descends in a snowfall:

the cat, incarcerated indoors,
peers behind a Roman blind
at ghost-white trees, an unfamiliar
stretch of lawn. The flight of birds
is stilled, their startled childlike cry,
the Buddha fountain silent among
the ivy. short curls crusted with snow
mean renunciation, but half-closed eyes
look inward and outward, long earlobes
hear what’s needed in the world

The world is indeed woven through with meanings you never get to choose, but that doesn’t mean one doesn’t welcome them. Especially when you’re willing to go off limits to find them.

Peter Kirkpatrick has published three collections of verse, most recent of which is The Hard Word (Puncher & Wattmann, 2021). A retired academic, he remains an Honorary Associate Professor in the English Department at the University of Sydney, and continues to work on the relationship between Australian poetry and popular culture.

Off Limits is available from https://puncherandwattmann.com/product/off-limits/ 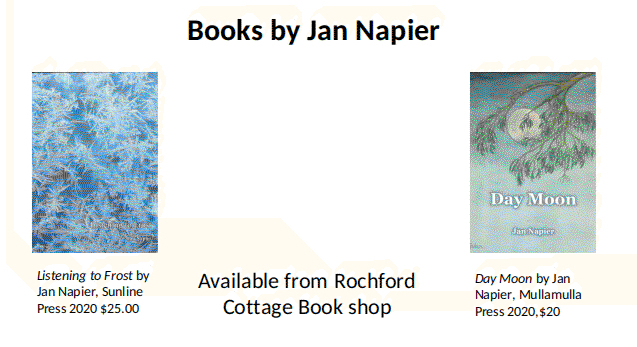