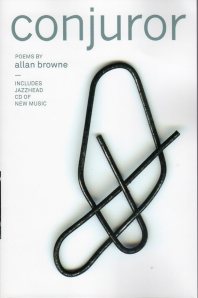 On Tuesday, June 6, I was driving down from Sydney to Melbourne, and happened to arrive just in time to attend the media and friends launch of Allan Browne’s Conjuror at Uptown Jazz Café in Fitzroy. Miriam Zolin, extempore’s founder, managing editor, tireless worker and promoter of all things jazz, throws a mean party, and I was primed to hear the poet speak and the drummer play; to hear word and sound collide and collude.

For those unfamiliar with jazz and improvisational music in Australian, Allan Browne has worked as a drummer in bands as diverse as the Red Onion Jazz Band, which he co-founded in 1960, and the Paul Grabowsky Trio in the 1990s; his drumming crosses over from the traditionalist to the avant-garde. As a musician he is a multi-award winner and elder statesman of the form. As a published poet, however, he is a newbie (this first collection covers forty years of writing practice) and a self-confessed autodidact.

In Browne’s realm ‘jazz’ is a form of collaborative writing:

i write in public

threaded on grammar, are screeching chalks

or a sea of question marks

That quest for infinitely evolving connections is exactly what jazz and poetry should be about. In Making Your Own Days, Kenneth Koch calls non-traditional rhyming poetry the ‘new music’: ‘a big, fragmentary collection of clearly depicted anecdotes and scenes, held together by invisible connections of sound and emotion . . . in which meaning and music seem to have melted into one another so as to be indistinguishable.’

Supported by Sam Pankhurst (bass) and Marc Hannaford (keyboard) Browne first paid homage to an early exponent of performance poetry. His reading of Vachel Lindsay’s fabulously rhythmic poem ‘The Congo’ (1914) reminded me that jazz is rooted in an oral tradition which goes back to the call-and-response of Afro-American spirituals and field songs, and forward to contemporary rap. Browne’s poems are best read aloud with a drummer’s voice: the beat brings the word to life. If you lack imagination, the CD accompanying the book is an excellent introduction to the music of The Allan Browne Sextet and to Browne’s distinctive Aussie drawl.

Much of the collection, in sections headed ‘Performed with Music’, ‘Muses, Music and Musicians’ and ‘From CDs’, is given over to elucidating the art of jazz: observations of playing, players and their world. Even sections purporting to deal with matters of the body (‘Frail Vessel / Steely Stuff’), the family (‘Heart and Home’) and life in general (‘Mad Mad World’), abound with jazz references. In the title poem ‘Conjuror’, the drummer walks through the crowd hampered by the appurtenances of his trade; he observes himself, the crowd and his progress. The poet and the drummer are both insiders and outsiders; actors and observers. Browne embraces the poetics of reflection and participation. He borrows freely from music and literature, mixing and merging the languages without self-consciousness. In ‘silhouettes ahead’:

the next narrative nags

and falls a spent flare on a safe sea

Years ago, when I ran a bookstore, Browne would occasionally drop in. His reading was eclectic, a self-education in what might have been the Bloom-ian canon. I remember him buying Stendhal’s Le Rouge et Le Noir (The Red and the Black), which chronicles a provincial young man’s attempts to rise above his modest beginnings with a combination of talent and hard work. It amuses me to equate Browne, the lad from Deni (Deniliquin, NSW), with Stendhal’s hero, Julien Sorel, but a momentary doubt assails: I might be mis-remembering. Perhaps it was not The Red and the Black he bought, but The Charterhouse of Parma; perhaps he bought both on different occasions; perhaps I am making the whole thing up? In any case, though I can detect no direct references to Stendhal in Conjuror, other classics are openly acknowledged. Kenneth Slessor’s ‘Five Bells’ inspired nine recorded compositions and Arthur Rimbaud’s ‘The Drunken Boat’ inspired both the The Allan Browne Quintet’s eponymous CD (2007) and several poems, including ‘je ne puis plus’:

into her own misère

the notes are bells

pitched to her god

by a human catch

The first verse ends on a tone of awe at the vocalist’s talent: her ability to pitch her voice to heavenly spheres, but to remain fragile, vulnerable, ‘human’. I assume Browne refers here to Stella Browne, who sings on the CD, but the sentiment could apply equally well to any jazz vocalist, who has stood upon a spotlit stage and soothed the audience with the panacea of her voice. The second verse concludes:

of an exhausted quintet

thankful for the darkness.

The best poems in this collection evoke similarly atmospheric scenes. They also display the same irritating quirk of punctuation: a full-stop at the end of every verse. Why, I wonder, use this emphatic point when the tone of the verse would be better served by remaining open ended; when neither the line breaks nor the rest of the poem’s punctuation warrants a full-stop? I wonder whether this is not some residue of musical composition (of which I know nothing). I would have expected a looser structure, something closer to the notations made for improvisation, from this jazz master.

Drummers are traditionally regarded as a somewhat diffident species, but Browne is not of that type. I have seen him flirt shamelessly across the footlights, pluck a rant out of the ether at random and pump out a set of controlled rolls, all at the same time. He is a raconteur who should be allowed to speak for himself:

oh yeah, but no

FRANCESCA SASNAITIS is a Melbourne-born writer and artist, currently based in Sydney, where she is completing an MA in Culture and Creative Practice at the University of Western Sydney. Her poetry most recently appeared in extempore and Visible Ink and can be read online at gravellyviews.wordpress.com.

Conjuror is available directly from the publishers, extempore publishing http://conjuror.extempore.com.au/