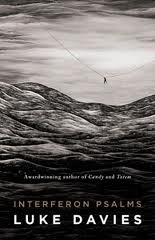 The title of this suite of poems refers to the treatment its author received for hepatitis C:

Interferons (IFNs) are proteins made and released by host cells in response to the presence of pathogens such as viruses,.bacteria, parasites or tumor cells. They allow for.communication between cells to trigger the protectivedefenses of the immune system that eradicate pathogens or tumors (Wikepedia).

He describes his treatment as follows:

I was on that stuff for 16 extremely debilitating months…It was actually a combination therapy (with an antiviral drug called ribavirin), the cumulative side effects of which are extensive, you could almost say comprehensive. Among the MANY side effects…the treatment, for separate reasons, reduces both the red cell count and the white cell count. This in turn leads to various unpleasant side-effects. (Comment on ABC website, 12 October, 2011)

His own perspective on the work:

I wrote a book of poetry in which illness was harnessed as a kind of metaphor for how one should engage with one’s life. (ibid)

The comparison that comes to mind for this long poem, with its sweeping changes of theme, mood and form yet complex architecture is the oratorio: ‘a large-scale, usually narrative musical work for orchestra and voices, typically on a sacred theme’, in spite of its avowedly secular nature. The mathematics involved in the 33 psalms on the 99 names of God also remind one of the mathematical relationships in Bach’s music, with its interweaving of point and counterpoint, theme and reply, prelude and fugue.

What it seems to be reaching for is an expression of awe and wonder not specifically linked to religion, though couched in the language and framework of a religious text. This seems very much a modern quest, where even atheists such as Alain De Botton (Religion for Atheists: A Non-Believer’s Guide to Religion: Hamish Hamilton, 2012) and A.C. Grayling are acknowledging the human need for ritual and ceremony, Grayling even having produced a secular bible for such occasions (The Good Book: A Secular Bible: Bloomsbury, 2011).

Davies has said he is not in fact a religious man; however, he admits that his Catholic upbringing remains an abiding influence (Review, ABC National ‘The Book Show’, 12 October, 2011). The incantatory style felt good, he says, the music of the service is natural in his ear. He refers to Joseph Campbell, who talks of ‘the rapture of being alive’ (The Power of Myth with Bill Moyers, Anchor Doubleday 2011). He himself uses the phrase ‘the transcendent to be found in the every day’. Still, his relationship to the supernatural seems deeply ambivalent, is he an agnostic, or is he creating for himself a personal notion of the divine (if that’s not an oxymoron)? His struggle to reconcile the divine with the modern harks back to Apollinaire, a century and a half earlier, a poet whom Davies quotes in the ‘Psalms’ and whose tortured relationship with ‘Lou’ has much in common with the poet’s own love relationship (as represented in the ‘Psalms’).

(it) ranges from graceful love lyrics to bold experiments, from rhyme to free verse to ‘shape’ poems, he manifests a new sensibility at once indebted to the forms of the past and enthusiastically at home in the world of automobiles, airplanes and movies.

This description could possibly be applied, with appropriate updating, to the ‘Psalms’, though I’m not suggesting that Davies is the equal of Apollinaire.

Bronwyn Lea, in her review of the ‘Psalms’ (The Conversation, 26 July, 2012), has also commented on the links between Davies and the French poet:

Nearly a century on and a world away, fragments of Apollinaire’s great longing – ‘I think of you my Lou your heart is my barracks’ – have surfaced with small distortions in a tour de force by Australian poet, Luke Davies…

I am reminded in particular of Apollinaire’s poem ‘Zone’ (Auster, op. cit. p.2), which is said to have been the jumping off point for modernism; even the style and tone have much in common with ‘Psalms’. In particular, Apollinaire manifests the same agony and ambivalence in regard to religion. On the one hand he declares that in this modern world:

but on the other hand

Perhaps the divine, for Davies, ultimately equates to the aesthetic. (E. Dissanayake – Homo Aestheticus: Where Art Comes From and Why, University of Washington Press, 1995 – has said that the concept of ‘meaning’ is of its very nature aesthetic.) It is in poetry that he finds the transcendent.

There are three interwoven motifs, three parallel tracks Davies takes us on, but to untangle them would be like trying to listen to one voice in a multi-voiced contrapuntal musical work. These are: illness; love and loss; travel and alienation. The way in which he has woven these together, the startling shifts between them, sudden turns and dissonances, create unexpected and fresh connections:

My blood was crawling with messianic impropriety. I was a plasma-electric hybrid; it gave me more staying power through the galaxy of my auto-disdain. Or love, I forget which. Or loves. (18)

He is almost forcing us to take the journey with him and sometimes it feels uncomfortable, like looking at the inside of someone’s head, but we know that this is carefully crafted and it is not necessarily his head, but one that he has created. Each of the major themes contains its own narrative: a process, a development. But it is not a straightforward progression, more one step forward, two steps back.

At least I got to bed a minute earlier at night, a minute at a time. (12)
Nature came back to reclaim pretty much everything…The feral geraniums didn’t give up either. (13)
‘That I would narrow down the tasks: one thing, then one. (57)
Mine is to be content with you and not to adopt any one line of action other than that which I’m in… (84)
to overcome certainty was to accept it (85)
… Abide in the mind of the unknown.(85)
The salmon of wisdom was upon me. (85)

Eventually the treatment stops, at first that is difficult, but gradually he begins to thrive. At the same time, he learns to deal with the loss of his lover, and, in terms of his travel and alienation he ‘landed like a bird inside myself’ (97). Part of the ‘answer’ he finds is in the development of the work itself, in the artistic process. I am reminded of Elizabeth Bishop’s poem ‘One Art’, where the poet admonishes herself to ‘Write it!’

The lessons the poet learns are hardly earth shattering, but they are tempered by his humour and his humility, and the fact that this wisdom is discovered, rather than merely learnt.

The poet links his experience of treatment to themes of love, of travel, of identity, and even with the fate of the world and the universe. His appreciation of literature, of nature, are so embedded, that they are integrated into his language, even altered in a spirit of humorous punning, as he distorts them to his purpose. In particular, he plays with notions of time and space:

The ice came back. If you sped up the centuries you could hear the moraines screeching.

Retreated, too. The forests grew again. We would have gone insane with the dripping of the leaves had we been around to hear it. But millions of years passed first. (11)

Of the three motifs, the one I most engaged with was Davies’ representation of his treatment, possibly because I have myself experienced chemotherapy, but also because it is the driving force. He evokes within the reader the sensations of the treatment ravaging the body, making the language breathe with them:

The cells bubbled silently in my liver … (20)
Everything that could sting would sting. (21)…
Then all the injections thinned my blood, and with it my hair, and thus my Great Goat Self.(24)…
Day by day the hours evaporated; hour by hour my hair fell out. Then everyone and everything was gone, except for whatever was most inappropriate. I could not be trusted to drive, there were no bad drivers, only me. Rage peppered the weeks. (32)

We can feel the breathlessness in these short phrases, the fatigue in the repetitions.

In the midst of this breathless, hurtling prose, we come upon a gem of stillness, of repose, of rhyme and structure:

I missed a girl I could not help but miss.
Such missing was colossal in the face
Of all the tender hours that came to pass… (53)

Love and poetry provide a reprieve from ‘the pitch and drag of days’.

What ultimately distinguishes this epic poem is its emotional and formal range; the seamless transition between moods, themes and forms of language, its capaciousness, where in one breath, the deeply personal and the macrocosmic are linked in a universe in which absurdity and meaning are equally present.

Most reviewers have been enthusiastic about the ‘Psalms’. Peter Craven, in The Australian (August 27 2011) has praised it in the following terms:

…a tremendous attempt to wrestle meaning from suffering.

It is one of the most ambitious performances in modern Australian poetry and it will command the world’s attention.

Philip Salom, in in the So Long Bulletin, begs to differ. What I have termed ‘emotional and formal range’ is, in his eyes, a ‘sadly uneven’ work. Salom admits to the seductiveness of the poetry, of the ‘wildness that a reader is supposed to swept up in (sic) and might well enjoy, for the wild ride…a seductive otherness.’ He acknowledges that the self-mocking humour is its ‘saving grace’ but his ultimate judgement is that the work is ‘sadly uneven’. Above all he bemoans the trend to ‘overblown personal…over inflated romantic voicing’; a trend he finds disturbing in contemporary poetry.

I have been somewhat shaken out of my trance by this cool assessment, and perhaps rightly so: the reader should be able to depend on the reviewer to stand back and not be swept along. On the other hand, at the heart of even the coolest critique is a gut reaction. I agree the work is ‘uneven’ but not that this is inevitably ‘sad’. Might it not be worthwhile at times to attempt something wildly ambitious and not quite succeed? Perhaps Beethoven is a better metaphor for the ‘Psalms’ than Bach. I prefer Bach, but at his best, Beethoven sweeps you away.

The Interferon Psalms are available from http://www.allenandunwin.com/default.aspx?page=94&book=9781742370347

Marietta Elliott-Kleerkoper was born in Amsterdam and survived the Holocaust in hiding. She arrived in Australia at the age of 11 with her family. She taught foreign languages and English as a Second Language and lectured in Teacher Education at several universities. She has been published in Australian and overseas journals and anthologies, has won several poetry prizes. Her Dutch-English poetry book and CD Island of wakefulness appeared with Hybrid in 2006. She is a former president of Melbourne Poets Union.