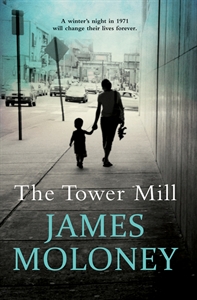 The Tower Mill is James Moloney’s first attempt at writing for adults. His reputation as one of Australia’s best known and well respected writers for children and young adults precedes him.

In the early stages of the novel we can be forgiven for feeling we are reading a YA novel as Moloney’s two main characters, Tom Riley, and Susan Kinnane (Tom’s mother), recount, from their own points of view, the history of their somewhat unconventional lives. Mother and son are given alternating sections within each chapter to tell their story, and although Tom, now an adult, is looking back, trying to make sense of how he feels about his mother’s role in his life, and Susan’s story is running forward, starting in 1968 when she is still a schoolgirl, and finishing in 2003; their stories are chronologically matched throughout, a structure that works extremely well. We are left to put the story of these two lives together and draw our own conclusions.

It is through the story, as we watch the characters mature emotionally, that we become aware of the shift from a young adult to an adult voice, a process that Moloney perhaps needed to go through himself in its writing, and which he has carried off with aplomb.

The backdrop for the story is Joh Bjelke-Petersen’s Queensland at a pivotal point in 1971 when the Springboks Rugby Team came to Brisbane and met with anti-apartheid protests. These, in turn, were met by the declaration of a State of Emergency, and followed by excessive force meted out by Joh Bjelke-Petersen’s police-force. There are political references throughout the novel; for those who have no prior knowledge of this era in Queensland’s history, the references do no more than whet the appetite, while, for those who lived through it, they provide a time for reflection. In view of Queensland’s present political climate, The Tower Mill could be read as a cautionary tale about where voter complacency can lead.

The book takes its title from The Tower Mill, a convict tower which gave its name to the hotel where the Springboks stayed while on tour. The protests took place outside the Hotel. Moloney has a fictional event take place, during a protest, that has a momentous effect on Tom’s life and that of his mother, Susan. We become involved, not always sympathetically, as we follow the consequences of the events that took place on that dark night in 1971.

Tom is the character most emotionally damaged by what happened that night. He never knew his father. He never felt his mother’s love. But the alternative would have been worse. From his point of view Susan always kept him at arms length; his brief encounters with her in his teen years felt more instructional than loving – how to be an activist – how to thumb your nose at authority – how not to conform. Susan might have been trying to open his mind beyond the conventional life he was leading with Mike Riley, the man he calls Dad, but for Tom, a teenager looking for a way into his mother’s heart, it was not what he was longing to hear.

Susan is a person with a vision of where her life should lead, and, like many who opt to follow their chosen path no matter what, she makes sacrifices that impact on others and leaves them to cope as they will. Her strong feminist views will do little to endear today’s readers who view gender politics in a more balanced way, but Susan is of her time and this needs to be taken into consideration. The characters whose lives she touches are left to pick up the pieces, not least the man she marries out of convenience, Mike Riley, a poet and English teacher. He becomes Tom’s surrogate father when Susan chooses to leave him and Tom and become a ‘political exile’ after receiving a letter, the contents of which are withheld from Mike until close to the end of the novel. If there is a weak point in the plot, I feel this is it. The content of the letter does not warrant the secrecy. If Susan were true to character, whatever the obstacles, whatever the outcome, she would have pursued the man responsible for taking away the life of her lover and Tom’s biological father, to the end. She would not have used it as an excuse to leave Brisbane for Sydney.

That said, The Tower Mill will not disappoint. We are left with plenty to think about long after we have put it down. The issues are huge: abortion, desertion, corruption, self-interest, the desire for revenge and the need for justice. Moloney has left Tom’s lack of willingness to agree to forgive and move on at the end of the novel open enough to allow him a way into a sequel, and to allow to Tom to take up the cause for justice his mother failed to pursue. I for one would look forward to reading it.

Petrina Meldrum is a Tasmanian based writer currently completing an MA in Creative Writing at the University of Tasmania. Her short stories for adults and children have appeared in a number of publications. She is presently working on a novel.

The Tower Mill is avaialble from http://www.uqp.uq.edu.au/book.aspx/1210/The%20Tower%20Mill