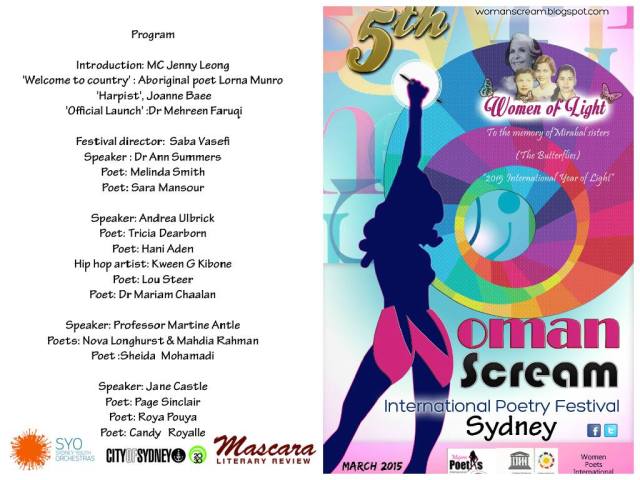 The Poetry Festival, also known as ‘Woman Scream’, is a platform for women’s creative participation, providing a socially viable and direct way of using poetry and the arts to encourage women’s achievements and bolster their self-esteem. It is also a vehicle for creatively protesting violence – in all its forms – against women. Begun in The Dominican Republic by poet Jael Uribe, the Festival is organised in Sydney by poet, filmmaker and human rights activist, Saba Vasefi. Saba is originally from Iran. At 24 years of age she became a lecturer at Shahid Beheshti University, one of the country’s most prestigious schools. She was a member of the Committee of Human Rights Reporters, and also worked as a reporter for the International Campaign for Human Rights in Iran. However, she was expelled from the University after only 4 years of teaching due to her activism, and fled from Iran to Australia. She has since completed a postgraduate degree in documentary film making at The Australian Film TV and Radio School, and two of her films, which deal with the plight of refugees in Australia and the issue children’s human rights abuses in Iran, were recently launched in NSW Parliament House. Saba believes that:

The role of women in history, society and culture is underrepresented or devalued. In many instances, the contribution of women is only recognised and appreciated when viewed as subordinate to the role of men. Cultural patterns of discrimination are intersectional; the marginalisation of women functions in a system that involves race, class, gender, sexuality, ability, ethnicity and age. Contemporary female artists must navigate through interconnected systems of oppression. The literature … of women… is the literature of resistance.

As festival director, Saba has ensured that established – as well as emerging – poets and artists will be represented. Well known poets such as Melinda Smith, Tricia Dearborn and Candy Royalle will perform alongside lesser known, but highly respected, poets such Sara Mansour, Hani Aden and Roya Pouya. In addition, the audience will be treated to musical performances and film presentations, as well as to speeches by the likes of leading feminist and journalist Dr Ann Summers, and noted politician Dr Mehreen Faruqi, among others.

Asked about her motivation for staging the Festival in Sydney, Saba has said:

This is a creative rebellion against the forces that abuse and displace women … My awareness of this matrix of oppression, and the complexity of humiliating structures that support it, motivated me to organise this event in Sydney. I have witnessed discrimination towards different cultures, social classes and other marginalised groups… As a Middle Eastern woman I am pleased to create an opportunity for myself and other women with different voices, from different cultures and with different sexual preferences to scream against violence and once more display our power and unity.

The Festival will be attended by some refugee women and their children, who will be released especially from detention for the evening, and all proceeds from ticket sales will go to the Bridge For Asylum Seekers Foundation..

Michele Seminara is a poet and yoga teacher from Sydney. Her writing has appeared in publications such as Bluepepper, Tincture Journal, Regime, Seizure, Plumwood Mountain and Social Alternatives. She is also the managing editor of on-line creative arts journal Verity La. She blogs at http://micheleseminara.wordpress.com/ and is on twitter @SeminaraMichele
.