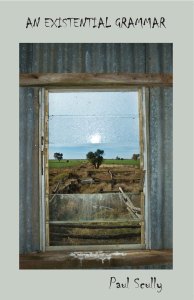 Paul Scully’s poems in An Existential Grammar have a wide range of settings and timeframes. He speaks to us from an olive grove outside Rome in the 5th Century BC, a rural vicarage in winter, a red rattler train, a village in Cambodia littered with memories of war, a rugged mountain walk, the cafes of the inner west, amongst many others. Each poem responds to the life in these settings with a formal, precise clarity of language, an acceptance, a dissatisfied intelligence, sometimes a wry humour. They can be places of safety for intimacy and thoughtfulness, or places the speaker feels at odds with. The strong emotion and memories in many of the poems are well grounded, triggered by vivid detail.

In the opening poems about Cincinnatus, Scully’s language reflects his complex response to his time and place.

…………….Discordant voices
that riffle through Livy, I harmonized them
with plangent afterthought, arpeggiated
your reflections with my sensibilities-
the faultlines of others, our own dissonances ….

Unusual words like ‘arpeggiated’ and “plangent’ sharpen the ambiguity of Scully’s emotional life. His diction does not over intellectualise the poems, because he also has a gift for finding the sensuality of his character’s responses. Cincinnatus is looking for peace in his rural haven, which he experiences in his body as well as his mind

Honeycomb smoked from a choreography of hives
earlier in the day, bread with crusts of earth
and wine and water tasting faintly of terracotta.
My wife’s face shines through contours of contentment.

He is seeking an escape from the shrill voices of Roman republican politics – ‘the thought of their contest exhausts me’. The thought of his life outside the farm is never far away as he tries to still his discontentment. It reminds me a little of Auden’s nuanced language trying to find more complex truths than war in his poems responding to the chaos of the late 1930s.

In “Lost and Found” Father Raymund restlessly searches for an almost lost faith, an emotional/ intellectual journey which animates the whole poem.

…………Father Raymond had decided
the calling he still grieved was more wish than summons.
to be wrapped in a yielding black,
identified with the communion of others
ritualizing hope in their daily lives …ever since
he had lived a consolation life, truth be told,
and anxiety became his vocation.

Later in the poem, we follow the search in the priest’s senses, an unquiet mind in a lively body trying to move beyond the drabness of his setting,

He caught a whiff of himself, sour disuse of age,
toasty in flannelette with the heater turned up high.
Washing was now timetable, eating perfunctory …
as he huffed down into his chair, even that.

“Whiff, toasty, huffed’ are the kind of words that place the priest in his body. His discomfort triggers memories of his time as a missionary in Papua New Guinea, a cold wind is outside, his children are non believers, but he reconciles himself to this. So a kindly intelligence is slowly built, an outsider to be sure, responding physically and emotionally to his surroundings and his memories. He’s the kind of keenly alive solitary that Patrick White might have enjoyed. Spiritual needs grow from a well drawn setting and past life that allows us to follow Raymund through his unsolvable ruminations. The poem becomes a lot more than a dry discourse on lost faith. This is my favourite poem of the collection.

I think this pattern of human needs growing out of a setting is continued in the wasteland of a dying mining town in ‘A Mother Country (“Chambers of a Black Hand”). The children are still lively, despite (or because of) the setting.

Here again we see the sharpness of Scully’s carefully chosen unusual diction ‘truck carcasses’ ‘whooping’, ‘loose’ ‘corrugations’ that conveys both his character’s physicality and a sense impression of their surroundings. There’s a strong interplay here between vivid imagery and human tenacity.

We see this also on a “Red Rattler “ train on its journey through the ‘dun colour of suburbs” as the poet watches the antics of a mentally ill man. He swears, he ‘crumples into a ball of clothes that rolls towards the door’, then a policeman hassles him, but even so ‘he surges upright  trumpets his intent  flags fractionally’. It’s a portrait that engages our aural imagination and sense of touch while keeping a vivid sense of movement. Like Father Raymund he’s a solitary alive in his senses, uncomfortable with his surroundings, fighting for his emotional life.

There are also a number of travel poems, where Scully shows a society’s tenacity despite dispossession and violence. In “Orphans of the Storm” there are memories of “the coarse stammer of AK47s/ when bullets weren’t being saved/ the chop and rasp of machetes through emaciation.” Here memory is the setting as a tuk-tuk driver’s sleep in a hammock ‘placates history”. The ‘old corruptions” are still there, but perhaps there can be a ‘rebirth at least/ into a life/ that can endure.’ Scully’s characters are always aware of their surroundings, but within this, life always continues.

Another strand of Scully’s poetry deals with the intimacy of a longstanding marriage set in nature. In “Southern Wright Water”, a couple are on holiday ‘as infant night/ enables sight and dark/light waves wash through our ears” The surroundings soothe, and the couple are easy in their home and cherished possessions –

………..sometimes the old flirtation
animates ambling love through our feet on cradling lino,
a glass too many of wine, tea served in crockery that aches
to be held fragile and firm as breath.

The ability of natural surroundings to produce a warm and humorous intimacy between people is also explored in “Inflammation of the Gums”. A couple walk through an undulating forest landscape described with breathtaking beauty –

Agitation in the branches: singly
Or in family groups, finches flitted ….

….. Longer stemmed birds interleaved with them,
sucked at banksia, their tails arced or elongated in flight.
Two lyrebirds sculpted a breath held moment …..

The couple get lost and wet, but despite (or because of) this humorous chaos, the memories remain. “It was several days before we reacquired nuance, the birds/ reasserted themselves, the gums attained the rose of memory.” Again Scully engagingly shows the relationship between setting and inner life.

This is a short sampling of the poems in a collection of great variety and intensity. Scully’s well chosen language, lively unusual characters and vividly drawn settings shine throughout.

Charles Freyberg is a Sydney poet and playwright. He has studied poetry writing
with Judy Beveridge at the University of Sydney. His poetry was recently
performed as Dining at the Edge at El Roco in Kings Cross. His play the Rose
also recently won best drama at Short and Sweet Sydney at the Newtown
Theatre.

An Existential Grammar is available from http://store.walleahpress.com.au/PAUL-SCULLY–An-Existential-Grammar_p_34.html